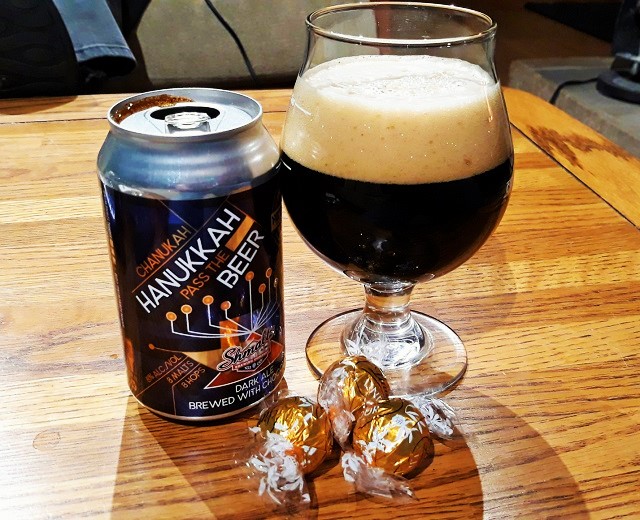 It’s the last night of Hanukkah, and have I got a beer for you. Yes we have, in a way, had it once before in The 12 Beers of Chanukah. But the Shmaltz Brewing Company–which has undergone a few changes itself–has come up with a new recipe for the beer, I have a can in hand, so sue me. 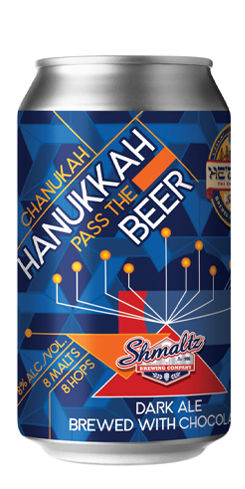 Back in 2014 the beer was called Hanukkah, Chanukah… instead of Chanukah, Hanukkah… but both are structured in the same way—eight different malts, eight different hops, 8% ABV to symbolize the eight nights of Hanukkah. There’s a change in the lineup of those ingredients (the malts: Premium 2-Row, Carapils, Kiln Amber, Dark Crystal, Honey Malt, Carafa Special 2, Chocolate Wheat, Flaked Oats; the hops: Warrior, Summit, Sterling, Crystal, Liberty, Cascade, Saaz, Centennial). But the big change is the introduction of chocolate, though I’m not sure where in the brewing process that occurs.

My wife, not adverse to dark beers, thought this chosen one had a wonderful chocolate nose and initially creamy chocolate flavor. But she said, “Somewhere in the middle palate it went ‘ping!’ and I didn’t care for the bitter finish. Maybe they should have used nine malts and seven hops.”

The line of the night, I thought. But I didn’t completely agree with her; the nose seems more dark malt than chocolate, but there’s no question once the beer hits the palate that it’s chocolate all the way. The sweetness does fade, but less into hop bitterness than a bitter chocolate bite. It all worked for me.

It would have been nice to have been in Brooklyn on December 16, when the beer was introduced at the 11th Annual Latke Festival at the Brooklyn Museum. I didn’t even know there was a Latke Festival but it looks pretty tasty. It’s a fund-raiser for The Sylvia Center, which focuses on teaching cooking in underserved communities. There’s judging going on and prizes are given in a variety of categories. The overall winning latke was a Sweet Potato and Shrimp Fritter by Chef Albert Nguyen of the Hanoi House in New York City. 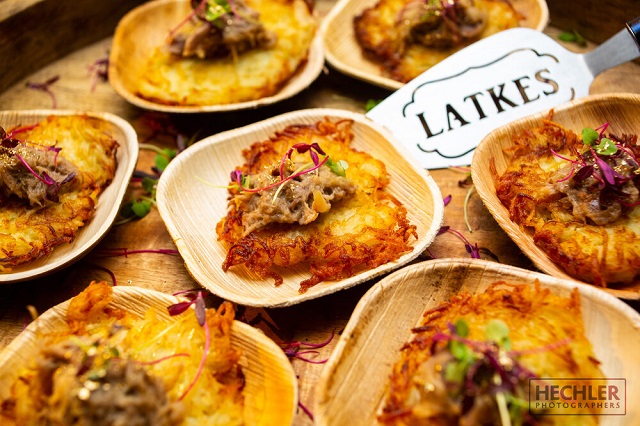 I took a look at the Hanoi House website and was mightily impressed by their beer list, with a variety of Vietnamese beers I’ve never heard of and numerous New York craft beers. Haven’t heard of a bunch of those, either. Looks like a good destination to broaden my education.

Speaking of good lines, the brewery seems to have let go of, “This Chanukah, candles won’t be the only thing getting lit,” in favor of, “Come on Bubbe, light my fire!” Clearly, shtick is still a key ingredient in the Shmaltz portfolio.

There’s ample history about the company in the 2014 review of Hanukkah, Chanukah: Pass the Beer. But to bring things more or less up to date, the brewhouse opened in 2013 in Clifton Park, New York, was sold last year to SingleCut Beersmiths of Astoria, New York.

So Shmaltz has, in a way, returned to its roots as a contract brewer. All of its beers are currently being produced in Elmsford, New York, at the Captain Lawrence Brewing Company. That includes those of Alphabet City Brewing Company, which Shmaltz acquired in 2016. (The ACBC’s new Sugar Plum Fairy might have fit into the grand scheme, but I couldn’t summon any.) Shmaltz also has a taproom and bottle shop in Troy, New York, called 518 Craft. So, the shtick goes on. 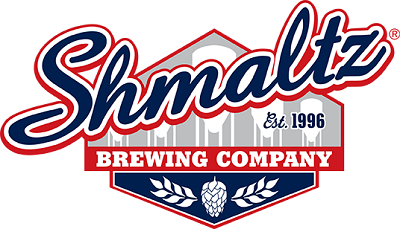