The Great Lakes Brewing Co. has been a midwest mainstay for 30 years now, and a beer fan would have to have been in a long winter’s nap not to know of beers like Dortmunder Gold, Eliot Ness Amber Lager, Edmund Fitzgerald Porter and, naturally, the Christmas Ale, which has been brewed since 1992. 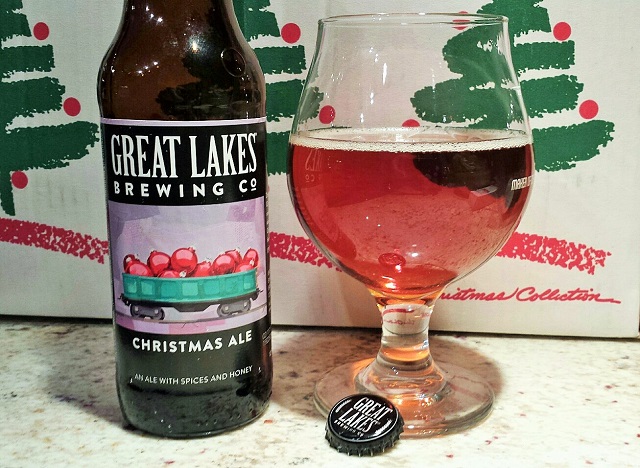 That means it’s been around for a quarter-century, and yet I’d never had it. The company distributes to a baker’s dozen worth of states, but Vermont is not one of them. So this was one of only a couple of beers I requested from breweries this year, and Great Lakes was kind enough to send it.

But then it seems like a kindly enough company. From fewer than 1,000 barrels brewed in its first year of operation, 1986, GLBC now produces about 160,000 barrels annually. That puts it at the 21st rank on the Brewers Association list of the top 50 U.S. craft brewing companies, and 28th on the overall list.

Not bad for a company started by a pair of brothers in a run-down Cleveland neighborhood. And not bad for the neighborhood, which the brewery frequently gets credit for reviving and helping to thrive. 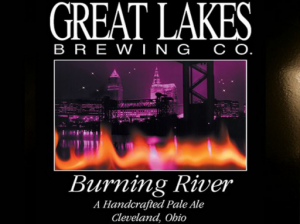 Indeed, the founding brothers, Pat and Dan Conway, follow a notion of a triple bottom line, looking to succeed in terms of economics, social responsibility and environmental stewardship.

Clearly they have a sense of humor, too, case in point the Burning River Pale Ale. (Referring to the nearby Cuyahoga River, which was so polluted and frequently oil-slicked in the first half of last century that it more than once caught fire. By 1969 attempts to clean it up had already begun, but another fire that year became nationally notorious and led to the passage of the Federal Clean Water Act of 1972. And to the beer, which gives hope to those of us who hope of late that bad things can lead to good things.) 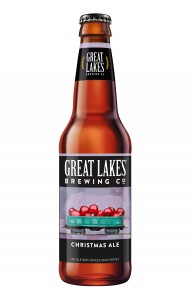 The Christmas Ale is a good thing, and clearly a local favorite. It’s one of the company’s best-sellers and lines go around the block for First Pour, when Santa taps the initial keg of beer at the company’s brewpub, site of its first seven barrel brewing operation. The event was October 27 this year, and someone figured out that one pint of Christmas Ale was poured every eight seconds for 12 straight hours.

The recipe has remained unchanged over the years. What the revelers were drinking was fashioned from some 6,700 pounds of cinnamon sticks, 6,700 pounds of hand cut fresh ginger, and 18,425 gallons of Michigan honey, give or take a gallon.

All this is evident, if in restrained fashion, in a pretty, clear reddish copper beer with a malty sweet nose and a muted effervescence. I didn’t pick up a lot from the Mt. Hood or Cascade hops in the nose, nor from the spices. The spices expressed themselves more when I let the beer warm up a bit, when I even thought I detected a hint of coconut.

I’m guessing it’s the honey that helps deliver a velvety, almost whiskey-like mouthfeel to the beer, and which prompted a sudden urge to devour a steak, though the brewers suggest pairing the beer with roast duck, spiced desserts and ugly Christmas sweaters. It all wraps up with a nice, light puckering finish. 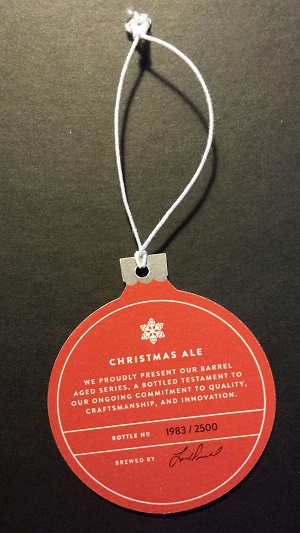 But I wasn’t finished, as the brewery had been nice enough to also send along the Barrel Aged Christmas Ale, which sat in Four Roses bourbon barrels for six months. It adds some deeper color and livelier effervescence to the beer along with its oak and vanilla flavors, and seemed to accentuate the honey. The puckering finish now seemed touched with a hint of sour.

The beer was bedecked with a neck label that looks like a Christmas tree ornament (suitable for hanging?), indicating I’d received bottle number 1,983 of 2,500, so good luck finding this limited edition. But as interesting as it was, I actually preferred the regular run.

The company has a nice little video on its website, more than a little of its meter and rhyme clearly inspired by Clement Clarke Moore. And, in the spirit of giving and all this niceness, here ’tis: 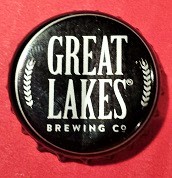