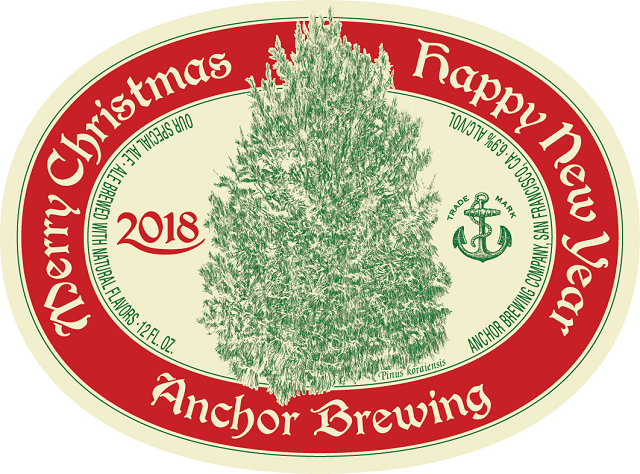 As usual, we’re getting rolling with the sole repeat through the years, Anchor Brewing’s Christmas Ale, called Our Special Ale, which it usually is. The recipe and label (always a tree) change each year, so I qualify it for that reason, and that it’s normally one of my favorites anyway, and that the brewery basically revived the practice in the U.S. of concocting something, well, special, for the holidays.

Many followed; the practice is now commonplace for breweries, which is fine with me. (Although I recently whined somewhere on the social medias that Vermont breweries are poorly represented in the category.) Anchor produced their first Christmas beer way back in 1975, making this the 44th rendition, and as far as I’m concerned, one of the best.

It’s the strongest one the brewery has produced so far, rolling in at 6.9% ABV. But it’s actually a little easier drinking than the 2017 version, one bottle of which I managed to hold onto for comparison purposes this year. My take on that one, as I’ve previously boasted, won the North American Guild of Beer Writers award for the Best Beer Review, possibly because a host of potential diversions kept cropping up, and I followed every one of them.

There’s less to go on this year, even on what I’ve learned is Roast Chestnuts Day. There’s a nostalgic sense memory if ever there was one, suggesting family visits to New York City when I was a pipsqueak to check out the holiday lights, the amazing shop windows, the tree at Rockefeller Center, with the pungent, near acrid aroma of roasting chestnuts wafting from corner to corner. And then there was Nat King Cole of course:

Not that I was ever that keen on eating chestnuts. But at the urging of my wife one holiday season I did try to roast some in an oven. Except for the ones I didn’t score with deep enough slits—they blew up in the oven—it worked okay.

But this year’s beer has nothing to do with chestnuts, certainly not in the taste. Pine nuts, maybe, since the tree on this year’s label (again drawn by artist James Stitt) is the Pinus koraiensis or Korean Pine or Korean Nut Pine or Chinese Pinenut located, the label informs, in the “picturesque botanical gardens just north of San Francisco.” The Korean Pine is a prodigious producer of pine nuts.

Here the plot thickens somewhat. In their own tasting notes the Anchor folks note “resinous pine” among the aromatics. Could it be, as brewer Scott Ungermann hinted at last year, that some of the tree on the label actually wound up in the beer this year, for the first time?

I asked Caitlin Corbin, who handles publicity for Anchor through the Dog and a Duck agency, whether those “picturesque botanical gardens” were actually the San Francisco Botanical Garden. But what I really wanted to know was the scoop on the tree in the beer.

Caitlin was, as no doubt she’s been with hundred of similar inquiries, a bit coy: “To answer your questions, we cannot confirm nor deny any ingredients in Anchor Christmas Ale. The flavor is certainly more piney than ever this year. The Korean Pine tree, pictured on the label, does indeed flourish within San Francisco Botanical Garden. It is a true symbol of peace as it grows in both North and South Korea.”

Deconstruct at your own risk. I think the phrase, “The flavor is certainly more piney than ever this year,” is pregnant with meaning. It could be a real giveaway. Or not.

In any case, the beer won me over utterly. The picture below isn’t my best, but clearly shows the difference in color between last year’s virtually opaque brew on the right, and the paler, more mahogany color of this year’s. As for the ‘17, it tastes “browner” than it did a year ago—more brown sugar notes, molasses, brown instead of red licorice. The carbonation now seems less spiky, though there’s still a touch of sour and a huskiness with some mild puckering. Still pretty damn good. 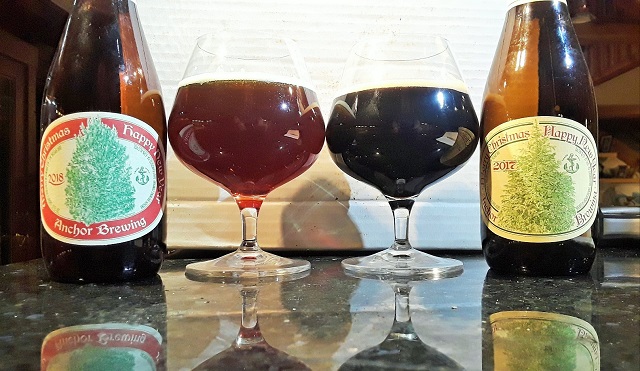 The ‘18 is world’s apart from its predecessor. I’m tempted to say a radical departure, as it retreats from the pungency of years past toward a more balanced lusciousness. Though a touch stronger brew than ever before it’s a smoother beer overall, and with a beguiling malt aroma and sweet and fruity hop overtones that is somehow striking its own sense memory in me. It’s provoking some antique sense of discovery when I first starting drinking craft beers, wondering, what are all these wonderful new aromas?

It’s tough to pinpoint exactly what those aromas are, but they’re siren-like, and the flavors don’t disappoint, revealing the distinct yet restrained spicing along with flavors of cherry, perhaps a whisper of smoke, a subtly ingratiating sweetness and a slight hop bite at the finish that’s like a kiss on the forehead. Well, as I said, won over utterly. It’s going to be tough to top this one, although I’m sure that’s what they’re attempting every year at Anchor.

Maybe I shouldn’t mention this, but while I was cruising the web to find out a little more about Pinus koraiensis I ran across a web page called “The 10 Best Trees to Have Sex With in San Francisco.” I’m assuming it’s tongue in cheek, but you never know in San Francisco. And it suggested another website for dendrophiles called San Francisco Trees. This site, by Mike Sullivan, is exactly what it sounds like, but on a platonic level. Just as well.