It was the late, great P.G. Wodehouse who said, “To find a man’s true character, play golf with him,” and surely variations on the sentiment have been repeated many times over. And anyone who takes the game to heart can recognize the inherent truth in it.

Rick Reilly uses the quote as an epigraph for his opening chapter in Commander in Cheat: How Golf Explains Trump (Hachette Books, $28). As might be expected, things don’t go well for Trump for the next 244 pages. 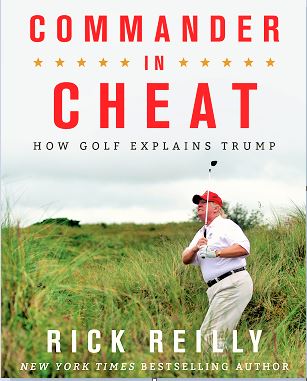 They go pretty well for the reader, although reactions may vary depending upon one’s political stance. Those who have had quite enough of Trump will have their worst fears confirmed while laughing their heads off.

Fans of Trump, or apologists, may find the going a little rougher, although I’d wager they’ll have to stifle a few guffaws as well. Reilly, as he has shown in a raft of books, particularly in the golf novels Missing Links and Shanks for Nothing, can’t seem to help but write with rousing good humor.

In this case, it does seem like he’s also writing with barely controlled fury over the antics of 45, even if mainly circumscribed here to the world of golf. But if how one approaches golf is indeed indicative of one’s character, then this book may be a document far more damning than the Mueller Report is likely to be.

When I first wrote this review* the President was still unaccountably tussling with the ghost of the late John McCain—losing to a dead man—while Mueller’s magnum opus was said to be ready to drop. If the latter is now being batted like a tennis ball across the political nets, there’s always Reilly’s brief.

Chapter after chapter indicts Trump—if not with prosecutable actions (though that’s open to debate)—then surely with a total lack of ethics and character and, most inexcusable in a golf context, unsportsmanlike behavior.

We learn, to take just a few examples:
> Of the 18 Club Championships Trump claims to have won, Reilly found 16 of them to be false, two unlikely, none confirmable.
> While he’s probably a legitimate 9 or 10 handicap, Trump claims to carry a 2.8. Reilly claims, “If Trump is a 2.8, Queen Elizabeth is a pole vaulter.”
> Trump doesn’t post all his scores anyway.
> His scores are suspect in any case, since Trump is an inveterate cheat while playing. He knocks balls out of the rough onto fairways, tosses balls out of bunkers, and has been known to toss opponents’ balls into bunkers. And he routinely rakes away putts of six feet or more.
> He never walks, always rides, and drives his cart right onto the greens. (Reilly: “Driving your cart on the green is like hanging your laundry in the Sistine Chapel.”)

And that’s just Trump playing golf. Which, at the rate he’s going so far, should far surpass the number of rounds Obama managed to get in in his eight years in office, which Trump so roundly criticized during his campaign. For those who really want to keep track, Reilly notes the eagle-eyed website TrumpGolfCount.com, which at this writing has him at 178 rounds since his swearing-in, at a total cost to taxpayers of roughly $99 million. (About three times the estimated cost of the Mueller Report.)

Then there are the financial shenanigans involved in purchasing the golf courses he owns, until it begins to sound like a grand Ponzi scheme. We hear from the many contractors and architects he has shortchanged. And his exaggerated plaudits for the greatness of his courses head into the land of the delusional.

Reilly isn’t just claiming all this; he’s clearly done the spadework to unearth all his anecdotes with many an interview with caddies, pros and others, and he, well, liberally quotes them all. His constant question is why does Trump do all this? He’s actually a decent golfer; he doesn’t need to cheat. Some of his golf courses are indeed very good; he doesn’t need to gild the lily.

The answer appears to be, as Reilly often notes, that it’s all about winning, no matter the cost.

Many of those quoted in the book who have played with Trump say it’s actually a lot of fun. So is Reilly’s book. But like some of the players, one is likely to be shaking one’s head in stupefaction once it’s all over. Indeed, in a final chapter Reilly waxes wroth over the damage he feels Trump is inflicting on the character of golf.

Golfers know something about integrity. And if you’ll cheat at golf, Reilly reasonably surmises, you carry a stain that can extend to any endeavor you may be elected to undertake. 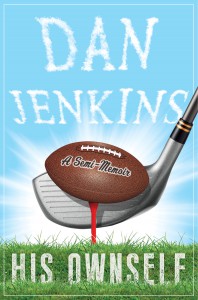 There’s little I need to add at this point to the tributes that flowed forth in praise of the late Dan Jenkins, who passed away on March 7, except to remove my cap. Jenkins is one of three writers (with Bernard Darwin and Herbert Warren Wind) in the Golf Hall of Fame, and as he said at his induction, the only one to arrive vertically.

Jenkins shows up in another epigraph in Reilly’s book, and the former was clearly a model and a mentor to the latter, as he was to many other writers in the wake he churned.

As Reilly tweeted after the news emerged that Jenkins had passed away at age 90: “So long to the great Dan Jenkins, the funniest sumbitch to ever call hisself a sportswriter. There’ll never be another.”

Jenkins was a Trump supporter, but I have the feeling he would have, at least, respected Reilly’s effort. I reviewed only one Jenkins book, His Ownself: A Semi-Memoir, the title of which was a play on words of two of his best-selling football novels, Semi-Tough and Life Its Ownself.

But in terms of golf writing, Jenkins had few peers, especially when it came to covering, and attending majors. I met him at the 2009 U.S. Open in Bethpage. Jenkins had taken to social media by that point, and was churning out mostly hilarious tweets, often, it seemed, at the expense of Sergio Garcia. Who surely deserved it. 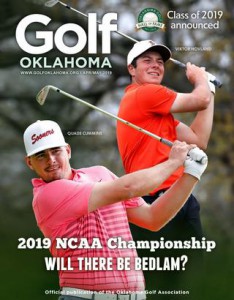 The final tally—68 Masters, 63 U.S. Opens, 45 Open Championships and 56 PGA Championships—232 in all, to save you the addition. And a lot of fine words about the dogged victims of inexorable fate.

*This piece first appeared, in somewhat different form, in the April-May 2019 issue of Golf Oklahoma.

2 Responses to “Taking the Measure of a Golfing Man”