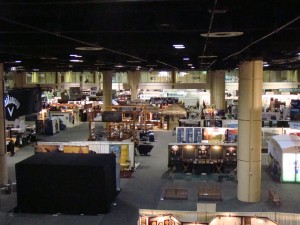 Anyone who’s attended even a single PGA Merchandise Show will attest to torrential deluge of hype showered on attendees. It’s not all malarkey, of course, but at a certain point – say, a half-dozen installments of the show – the natural tendency is stop even trying to evaluate veracity and focus on what’s attractive on a purely visceral level. For many, that means display booths serving free beer at the end of the business day, for example.

For me, it means entertaining myself with all the new terminology concocted to sell the goods and services, a creative endeavor no less, and sometimes more, innovative than the innovations themselves. Meant as neither endorsement nor condemnation of the products themselves (except as otherwise noted), here are some examples from the most recent show.

• The swing flaw that dare not speak its name? Don’t tell that to ShankMeister. Not a training aid designed to teach the you-know-whats, it’s actually a website (www.ShankMeister.com) devoted to matching buyers and sellers of clubs and other equipment, mostly used.

• Not to be confused with the plumbing solution of the same name, Drain-O Instant Pro Putting Fix claims to “fix your putting in less than one minute.” Basically two stanchions connected by wire and a guide rail to shape your stroke, it seems intuitively sound, even as its “make everything” claim is probably a bit unrealistic. (www.drain-o.com)

• Bet you thought that braising was just for preparing food. But you can look it up: To braze (vt.) is “to give something a hardness like that of brass.” Thus does Tour Edge “combo-braze” some of their drivers and fairway “woods,” the code word they apply to fusing different metals in their clubheads. Seems to be working, too, as a number of PGA Tour players use their clubs, without endorsement deals. No such deal for me, either, as I have two of their clubs in my bag. (www.touredge.com)