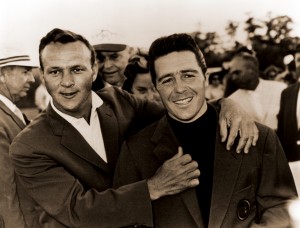 Some people – and golf courses – just seem to hold up better than others. When Gary Player won the Masters 50 years ago, Augusta National played hundreds of yards shorter than today. It’s undergone more procedures than Joan Rivers –redesign, renovation, “modernized” numerous times — while The Black Knight has remained steadfast and remarkably unchanged. Cosmetics aside, he exudes the same earnest energy he always has.

My admiration for sports heroes has generally been confined to amazement at what’s been described as their “physical genius.” Attempts to connect this to outstanding character teeter on the sycophantic. Player’s candor in analyzing golf’s current dilemma – a function, he says, mostly of greed – makes him an unusual and refreshing role model.