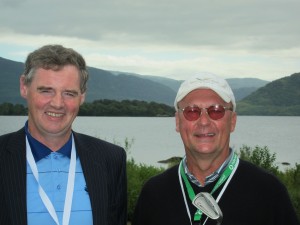 Pat Sweeney, left, manager of Enniscrone Golf Club, reunites the author with his gap wedge at the Irish Open

Having left my gap wedge out on one of the seaside moonscapes on the back side at Enniscrone Golf Club, I wasn’t about to go back out to try to locate it. The light was fading, the pro shop closed. No problem, I figured: We were staying right across the road and departing at 8:30 the next morning. We could give the pro shop another shot on our way out of town.

I figured wrong. This was Sunday – worth noting as the traditional competition day in Ireland and thus the most difficult for out-of-towners to secure tee times – and would be capped by the Ladies Captain’s Dinner. We’d be long gone before the pro shop opened on Monday.

The wedge has some minor sentimental significance, which I’ll spare you herewith, but jettisoning it would have been fine.  When I happened to mention it to Tourism Ireland colleague Rory Matthews, though, he said he’d look into it.

Pat Sweeney, the manager at Enniscrone, presented it to me at the Irish Open a couple of days later, having thrown it in the car for the several-hours drive to Killarney for the tournament.

All of which is to say that our Irish hosts have been really nice – a maudlin cliché, perhaps, but still a point to consider in selecting a destination.

Empiricists may point to the northwest being among the least-trafficked regions, and its corollary: The fewer Americans you see, the easier it is to relate to the ones who do show up. For me, the area’s always seemed to have the esprit d’corps of the outlier, even as I’ve been treated well wherever I’ve traveled in Ireland.

This in turn seems confirmed by the buoyant turnout for the Irish Open. Despite huge wins in majors by native sons McDowell, McIlroy, Clark, and Harrington, the tournament could find no major corporate sponsor and was bankrolled by private interests. Times are tough.

That didn’t deter a united front among European PGA Tour players in support of the event, notwithstanding the purse – winner’s share: 250,000 euros, about 358,000 bucks – comparative chicken feed for the PGA in the States.