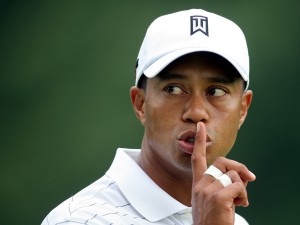 As typically happens in our 24-hour-news-cycle world, word of the kerfuffle between Tiger Woods and Dan Jenkins arrived before the issue of Golf Digest containing the offending feature: “MY (Fake) Q&A WITH TIGER,” as the cover language reads.

Subtitled “Or how it plays out in my mind,” I presupposed that Tiger’s characterization of the piece – “like a grudge-fueled piece of character assassination” — was in some way that of a guy who’s expended immense energy trying to maintain an image. Jenkins’s humor might be corny in its Andrew Dice Clay incorrectness, I posited, but it would be essentially harmless.

Wrong. The unreliable narrator (or interviewee) can be an effective device for skewering its subjects, of course. Think of the design professionals hilariously parodied in Tom Wolfe’s From Bauhaus to Our House. The difference between that treatment and Jenkins is Wolfe’s uncanny ear for the idioms – “that’s so bourgeois” – and rhythm of the time. The stilted dialogue he writes sounds like something they would say.

In contrast, the answers Jenkins frames for Tiger aim to be as preposterous as possible. It’s more slapstick than parody, with Jenkins having Woods insult fellow pros (e.g., Sergio), while radiating arrogance and lack of intelligence.

(He even commits a typo on Tiger’s behalf, part of a gag based on the premise that Woods mistakes Gandhi for a pro golfer named Gandy.)

Finally, Wolfe poked biting fun at an institution – modernist architecture – that was ripe for the poking; and although many of its minions were identified by name, the joke didn’t really single anyone out.

It’s impossible for me to view the “interview” as other than mean-spirited and, in any event, ham-handed, regardless of one’s disposition toward Tiger. Reading it brought to mind a reaction to notices about lavish Broadway productions closing after two weeks of miserable critical reviews: Why didn’t someone – an editor, in this case — step in at some point and say, “Hold on, this is terrible.”?

Not the easiest thing to say to one of the most decorated golf writers of all time, no doubt. (And no, I’ve never tried it.) It’s also true that Tiger’s got a spotty relationship with beat writers, according to a few of them known to this reporter – not an excuse, but perhaps an explanation. Sometimes it’s difficult to tell whether this stuff is written more for readers or golf buddies.

But if this is in some way part of an attempt at an “edginess” conceived to appeal to a new generation of readers, it’s not what you’d call dead solid perfect. More like just a cheap shot.