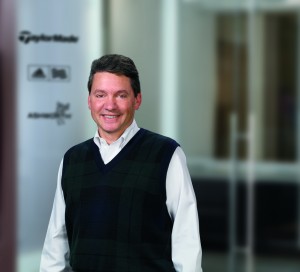 Mike Ferris, vice president of product marketing for TaylorMade-adidas Golf, was in Hartford, Ct. recently for the Connecticut Golf Show and I the opportunity to talk golf with him.

Ferris started his career in the game 24 years ago at the Top-Flite Golf Company, a division of Spalding Sports Worldwide, which was based in Chicopee, Ma. At Spalding he held a variety of domestic and international roles including managing director of international golf operations and vice president of golf ball marketing, and was an integral member of the teams that developed radical improvements in two-piece balls and three-piece multilayer urethane balls, the latter of which included Strata (the first such ball to win on tour) and Tour Edition.

Following Spalding Worldwide’s acquisition of the Ben Hogan Golf Company in 1997, Ferris was named Hogan’s vice president of marketing in 2002, and in that role guided the launches several successful products including the Ben Hogan Apex Tour ball and Ben Hogan CRX hybrid. When Callaway Golf acquired the Top-Flite and Hogan brands from Spalding in 2003, Ferris became Callaway’s vice president, category management of woods, and later took responsibility for golf balls. When he joined TMaG in 2005 he was put in charge of golf club marketing, and then in 2010 was given responsibility for the product marketing division.

A lifelong golfer and five handicap, he served three years as a board member of the National Golf Foundation and shares in one patent for golf bag technology and two for golf ball packaging. Additionally, he holds a Bachelor of Science degree from the University of New Hampshire and an M.B.A. from Pace University in New York City.

One of the things TaylorMade has attempted to do is offer the average golfer customization options on your drivers. How has that worked?

Ferris: It has taken a while for people to understand the benefits but more and more people are getting it. When they get on a launch monitor and see what is going on with their swings and how our clubs can help their games with our adjustability factors they have a clearer picture. It’s a cultural mindset that we have to change and I think we’ve made great inroads into changing concepts about clubs.

The equipment industry has taken a bit of hit in recent years. How is TaylorMade doing?

Ferris: We have been doing very well, in fact. Our president and CEO, Mark King, fosters a culture of change and technological advancement, where we just don’t stand still and rest on our laurels but rather continually look to bring new products to market to help golfers enjoy the game more. Whether it is the R11 driver that we have now, the Penta golf ball or our hybrids that have become very popular, we always keep trying to push the envelope and not stand pat on our success. You have to keep taking chances and stay fresh.

What are your thoughts on how we can grow the game of golf?

Ferris: Programs like the First Tee are wonderful and TaylorMade is doing its part by making the game more fun to play for more people. We are in the entertainment business and we are always fighting for people’s attention and time. It’s like snowboarding versus skiing. It’s competing with other sports and activities.

Do you see any problems with the game that must be addressed?

Ferris: The time it takes to play a full round of golf is always a challenge. You are talking about a four to five hour round on average. Perhaps we have to change the mindset where we make it acceptable to go out and play nine holes or six holes, whatever you can fit into your busy day.  I started playing golf more when I went to work at Spalding. I played a lot at a course called Shaker Farms. I would play a six-hole loop in the morning before work and that was my golf for a long time. It was what I could fit into my day and I accepted it.

How about the courses themselves? Do you think some of them are being designed too difficult for the average golfer?

Ferris: Shorter courses are good, maybe not an executive style course but something that more people can feel like they can play and have a good time. I know architect Ron Garl designed a course that has no bunkers, which makes it easier for higher handicappers to play and also cuts down on maintenance. I don’t think there is anything written in stone that you have to have bunkers on a course. Having a set of tees on every hole around 150 yards out from the green is a great idea. That way, beginners or others can still play the hole but from closer in.

Golf can be a frustrating game. Any tips for beginners or high handicappers?

Ferris: We had a guy at Spalding that would get so frustrated because he couldn’t shoot par on holes. So we told him to consider a bogey “par” for him on a hole and it completely changed the way he looked at the game. He would come into work and would say he shot par or one-under and I knew what he meant. Again it’s changing mindsets about playing the game and enjoying it for what it is.