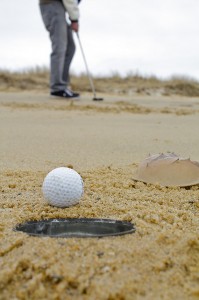 When our daughter was young we always headed to Cape Cod during the summer for a week or more of serious R and R and fun. Once she grew up and went on her own, my wife and I decided to change our visits to the Cape to early autumn, when the crowds are one-fourth the size, the beaches quiet, the daylight air still mild, the nights crisp, and the seafood as good as ever.

The Cape is a wonderful venue for fall golf, with the courses in good condition and the competition for tee times nowhere near as intense as during the summer months. Courses on the Cape will stay open all winter, providing Old Man Winter doesn’t send snow or ice pelting down on the peninsula that sticks out like a flexed arm into the Atlantic Ocean.

Cranberry Valley Golf Course, designed by Geoffrey Cornish and Brian Silva and located in Harwich, is well a maintained course and features a superb routing that flows easily over beautiful terrain, which includes marshes and, of course, a few cranberry bogs.

Management enhanced the course a few years ago through an extensive bunker redesign and restoration, overseen by noted architect Mark Mungeam. Several fairway bunkers were relocated so as to come into play to protect par against today’s modern equipment, although the best players can still dare to fly the traps off the tee.

Cranberry Valley isn’t overly long, 6,745, but there are a number of dogleg holes that add invisible yardage and demand proper club selection and shot placement off the tee.

Bay Pointe Country Club in Onset offers a fun routing and a course that is easy to walk. The course, located just a mile from the Cape Cod Canal on the mainland side of the Cape, plays only 6,201 yards from the tips and is a par 70. It is a shot maker’s course, one where correct club selection and accurate positioning is rewarded more than brute strength off the tee.

The terrain of Bay Pointe is gentle, except for some hilly sections on the opening two holes, the first a par-five that measures close to 500 yards and the second the longest par-four on the course at 465 yards.

The layout also features one of the few island greens in Massachusetts, the seventh hole, which plays only 100 yards from the back tees. But you had better hit it right on the number or double bogey comes into the equation.

A few miles away is Sandwich Hollows Golf Club, which offers views of Cape Cod Bay to the north from several holes. The course is bordered by hundreds of acres of conservation area to the east, west and south, giving golfers the feeling of being isolated from players on other holes.

Sandwich Hollows features a number of par-fours on the short side, several long par-threes, and challenging par-fives, one of which (the sixth hole) measures close to 600 yards from the tips.

Up Route 6 a bit from Sandwich Hollows is the Yarmouth’s 45-hole facility that includes Bayberry Hills Golf Course and The Links 9 and Bass River Golf Course.

The original 18 holes at Bayberry Hills was designed by the team of Geoffrey Cornish and Brian Silva and opened for play in 1986. The layout can be stretched to almost 7,200 yards. The track features seven par-fours of over 400 yards and three par-threes over 200 yards, including the monstrous 241-yard 17th hole. Number four is a good par-four, playing around 400 yards with water guarding the right side of the fairway landing area and the front of the green.

The Links 9 was opened in 1999 and is a fun course to play if you want to tack another nine holes onto your round or are merely looking to fit a little golf in between sightseeing or walking the beach. A number of the holes are doglegs, which makes approach shots tricky if you don’t put your tee shot in the proper position. Number nine is a 195-yard par-three that demands a solid shot over water to reach a medium size green.

In contrast to the modern look of Bayberry Hills, Bass River Golf Club offers a 100-year-old course that the legendary Donald Ross renovated and expanded in 1914. The layout rolls along among trees and sandy hills and features narrow fairways, small greens and views of nearby Bass River.

The club’s signature hole is the sixth, a 169-yard three par that plays across the river. The layout is on the short side, but the holes demand good shot making and a deft touch around the greens, a Ross trademark.

The Captains Golf Course is Brewster offers 36 holes of very good golf on two distinct 18-hole layouts. The club bills itself as the Cape’s premier public golf facility. The conditioning here is always top notch, the golf is challenging and scenic, there are two practice greens and a driving range, a restaurant, a staff that is always available for lessons, and a fully-stocked pro shop.

The two courses–The Port and The Starboard–are solid routings. The Port plays to a yardage of 6,724 yards and has a slope of 131 and a rating above its posted par of 72, which gives an indication of the difficulty of some of the holes. Perhaps the best is the 573-yard, par-five eighth. A pond guards the putting surface and there are several large fairway bunkers to complicate matters.

The Starboard Course plays around 6,800 yards and has a slope of 122. It’s a bit more “player friendly,” with wide fairways and large greens and fewer bunkers than its sister track, which makes it more suitable for seniors and mid-handicappers. Number 18 is a great finishing hole, a 534-yard par-five that can be reached in two by big hitters.

Falmouth Country Club is a town-owned club that has 27 holes of golf–an 18-hole, par-72 course and the nine-hole “Talon” layout that appeals to players of all abilities, especially seniors, ladies and juniors.

FCC’s holes have a “Carolina” feel, and it is real treat to play here during autumn when the warm breezes blow off the Atlantic Ocean and the sun shines through the tall pines that line much of the layout.

FCC’s Championship Course plays 6,665 yards from the tips and has a par of 72. There is a nice mix of short, mid-length and long par-fours that will have you hitting every club in your bag, both off the tees and on approaches to the medium-sized greens.

The Talon Course plays 3,455 yards from the tips and, despite its reputation as a “family” course, the track has quite a bit of bite, such as the monstrous, 495-yard par-four first hole.

The 6,601-yard, par-72 championship layout offers an approachable routing for all golfers, yet one that can be tricky and baffle the best players at times. A number of the holes are lined with waste areas or wetlands, which means that you’d better keep the ball straight off the tee if you want to enjoy your round.

The seventh hole is a great par-five, playing 525 yards from the tips and big hitters can get on or close to the putting surface in two shots with a big drive. But water runs almost all the way down to the green on the left side and the fairway is somewhat narrow.

The Brookside Club in Bourne calls itself a public club with a private feel. The layout was originally designed by Mike Hurzdan and refined by John Sanford 15 years ago. It offers very good conditions and an approachable routing, one that pleases beginners and scratch golfers alike.

The first hole is a 460-yard par-four that tests you right out of the box, and the 10th hole is a nice par-five that plays almost 600 yards and tumbles softly downhill to the green.

Waverly Oaks Golf Club in Plymouth, a town that is considered part of “the old Cape,” has 27 holes of great golf.

The Championship Course is a test but it won’t beat you up. The 251-yard 17th, perhaps the most difficult short hole in the region, demands a lusty tee shot over a waste area and a yawning bunker that sits some 15 feet below the putting surface.

The club’s Challenger Course is a super spot for beginners and high-handicappers to have some fun. The layout plays only 2,264 yards from the back and is a par-33. Conditions on the Challenger track are just as good as on the Championship Course.