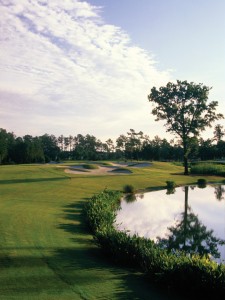 This is a solid layout that is worth checking out if you are in the Lowcountry. The club for several years hosted Annika Sorenstam’s event on the LPGA Tour, and is situated among scenic marshlands and live oaks, with 13 holes routed along the Wando River and Horlbeck Creek.

Tree-lined fairways provide generous landing areas to set up approach shots to multi-tiered greens guarded by bunkers and water. This is a true shot maker’s course that can be stretched to a whopping 7,188 yards (a slope of 147), with four other sets of tees to meet the playing abilities of all visitors. Play it down the first time you visit and you’ll have much more fun, trust me.

I gave it a shot on a recent visit and came away impressed with the routing and conditions, which were fine. The greens are on the large side and roll true. They are kept at a medium speed, befitting a resort area course and one that receives a lot of public play.

The course has received a number of plaudits, including South Carolina Course of the Year by the National Golf Course Owners Association; a Top 15 Best Places You Can Play in the State by the Charleston Post and Courier; Course of the Year by the South Carolina Golf Course Owners Association; and an Honorable Mention in Golf Digest’s Best New Courses.

RiverTowne Country Club greets you with an opening hole that lets you unwind a bit. A short par-four dogleg right, the first gives the player a chance to come into the sloping green with a wedge after a solid drive that favors the right side. I fit a drive between bunkers that guard the driving area both inside and outside the dogleg and was left with a pitch to the green. Challenge the bunker inside the dogleg and you not only shorten the hole, but also set up the best approach angle into the putting surface.

The shortest par-four on the course, the 311-yard sixth is a sweet risk-reward hole, with sand, live oaks and marsh contributing to the challenges. The green at six backs up to a marsh eager to gobble up any long approach shots, and a deep bunker fronting the left half of the green waits to do the same with anything short and left. I hit a good drive and knocked down a half-wedge in for an easy par.

With marsh skirting the entire left side of the 586-yard par-five’s fairway, along with three large oaks–the last of which if 213 yards out from the back tee and pinching the fairway from the right–the 11th is the most demanding tee shot at RiverTowne. A second shot played to the crest of a ridge and avoiding a large bunker right will leave a pitch of between 110 to 120 yards. The green is flanked by marsh to the left and a small pond to the right. A very narrow opening has been left in front should you entertain thoughts of reaching this one in two. Not likely.

With a lake running the length of the left side of the 211-yard par-three 14th and bunkers to the right and rear of the green, the target is clear and dangerous to find. But the deep green is designed to be large enough to receive the shot required.

The mammoth 478-yard par-four 18th at RiverTowne completes a finishing stretch that may be as difficult as any in the Lowcountry. The 18th hole is set against a marsh to the left from tee to green, so you can expect the wind off the Wando to add to the difficulty of this long hole that bends slightly from right to left. I took a five, which felt like par.

All in all, RiverTowne Country Club is a good test of golf, with nice conditions and lots of pretty scenery.