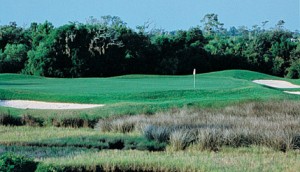 The coolest thing about playing golf as a daily fee golfer at Charleston National Country Club in Mount Pleasant, SC. is that it was never supposed to happen that way.

You see, Charleston National was originally conceived as an exclusive, well, “National” club, along the lines of Augusta National Golf Club. An airport was even built not far from the club that would welcome members on a private runway. Rees Jones was hired to transition his drawings onto hundreds of acres of pristine lowland, full of marshes, flora and fauna about 20 miles away from the city of Charleston.

The course was pretty much built when plans were altered dramatically when Hurricane Hugo roared into the area in 1986 and totally altered the landscape, tearing down thousands of beautiful, old live oaks that were draped with Spanish moss. The original two dozen or so members, their product damaged and changed, began to withdraw and the developers decided to switch gears and make their club a public one, while building attractive communities on much of the rest of the property.

We, the paying public, were left with one heck of a course, the routing of which was only slightly altered and it clubhouse moved inland and off the ocean where it was originally sited, as was the proposed finishing hole. The changes left most of Jones’ layout in place. So, it has become our treat to play the once-private-now-public Charleston National, which only costs $50 or $60 bucks for 18 during the week and slightly more on weekends.

The course was carved out of property near the intracoastal waterway, through natural wetlands and lagoons and a pine and oak tree forest. The result was a championship caliber golf course with some of the best views on the southeastern coast.

Charleston National, which was voted the number one non-resort golf course in the Charleston area by Golf Magazine, is the only Rees Jones design in the Charleston area open to the public. The par-72 stretches just over 7,100 yards from the tips, and there are five sets of tee markers to accommodate all playing levels. The greens are undulating, as befitting a private course, although kept on the slower side to accommodate all public golfers. A number of wooden bridges are strategically placed to carry players over the natural areas from tee box to green. Go slow and you may see egrets blue herons, alligators and other wildlife floating or crawling by as you pass. The finishing holes at Charleston National are among the prettiest in the region.

The first time I played Charleston National, ironically on a cold February day (well, cold by South Carolina standards) I fell in love with the layout. Playing 18 holes is like hitting golf shots in a Lowcountry nature preserve. The holes stand apart from one another (sometimes way apart) and there is immense solitude to be found, especially on the back nine on quiet days. Hugo left enough old oaks and other trees to frame some of the holes, mostly on the outward nine.

Jones designed a course that is challenging from the back markers but very approachable from one or two tees down. There are quite a few forced carries, mostly over marshes, but none that will cause you to shake and shiver. The par-threes here are all superb, starting with the seventh, a 218-yarder and ending with the 188-yard 18th. That the finisher is a par-three is a bit odd, but that is because the owners flopped the nines several years ago for pace of play purposes and to allow players to stop at the clubhouse on the turn. All of the short holes demand shots over the marshland, which is in abundance at Charleston National, but if you play one marker down you’ll be hitting nothing more than a mid-iron and sometimes a short-iron into the large and receptive greens.

One of my favorite holes the course is the fourth, a 360-yard par-four that plays towards a bay that is visible as you approach the green. There’s a pond on the left side and large homes hug the water’s edge, with mounding on the right. The sixth is a perfect example of a good, short par-four. It plays 360 yards from the back markers, only around 300 yards from the next two sets of tees, and a good drive leaves me with a short-iron or wedge into a small green that is guarded by a tree on the right and marsh front and left.

The 12th hole is perhaps the most daunting hole on the course. My tee shot always favors the right side of the fairway to avoid bunkers and marsh on the left. Do that and you are left with a choice to either lay up to around the 150 mark, or try and carry a marsh and shorten the hole. But the fairway landing area beyond is rather small and my play is to lay up and have a mid-iron into the green, which is elevated and has deep bunkers guarding it. Par here feels like birdie and I’ve only made a few of the former but I take a big number out of the equation.

As I mentioned above, the back nine is, I believe, the best nine holes in the area, and that includes some real fine golf courses. The views are magnificent and there isn’t a weak hole, save for perhaps 17, which measures 438 yards but is rather boring in that it is straight and has no real distinctive features to it, except for some bunkering and a large, deep, sloping  green. It almost feels that Jones fit this one into the layout but I’m quibbling because the rest of the holes are so darn good.

I must mention the 16th, another sweet risk/reward hole. It plays only 325 yards from the back and again offers eye candy views of the marshes and some magnificent homes that are located about a wedge shot away from the tee box. The safe play is to lay a five-wood or long iron out onto the fairway and have a nine-iron in your hands for the second shot. But I always pull driver, take it over the left side of this dogleg left and try to shorten the hole into a chip shot. It isn’t out of the question for big hitters to reach the green, especially from the tees down from the back markers. But again, there are woods to the left and marsh right, left and long of the small putting surface, so you had better be accurate.

The conditions at Charleston National are very good. It must be challenging for the superintendent and his staff to care for a course that is surrounded by Nature that would love to turn the land back into what is once was, one of the most stunning pieces of real estate in Mount Pleasant.

Give Charleston National Country Club a try. You’ll be back for more.