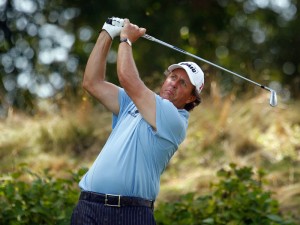 No, it’s not March 20th, or the first full moon after the first of the month, or any other old farmers’ tale. It’s Masters Week, as any golfer knows.

The season doesn’t officially start until the first shot is struck in earnest on Thursday, when we sit back and take in the beauty that is Augusta National Golf Club, dressed in all her green and flowery finery.

I can tell you that if you think Augusta National is beautiful on television, you ain’t really seen nuthin’ until you are there, walking the course.

On a practice day a few years back, I stood in the pine straw off the fairway on the 13th hole and looked down in sheer awe at the sight below, Rae’s Creek meandering along the side of the fairway, the 12th green to the left and the 13th green across the creek to the right, azaleas and other flowering shrubs ablaze among the tall Georgia pines, white sand glistening on a warm, sunny April day. It was as close to a real life painting as I have ever witnessed.

So, what’s going to happen this year that will captivate and thrill us? Can Tiger claw his way into contention after a pretty dreadful early season? Will Phil parlay his scintillating play at the Shell Houston Open into a fourth green jacket? Can Lee Westwood get the monkey off his back and finally win a Major? Will one of the young studs like Dustin Johnson, Bubba Watson or Gary Woodland bring the course to its knees with meteoric drives and short irons into the maniacal putting surfaces?

For my money, I like Mickelson’s chances. His final 36 holes at Houston were vintage Phil and a thing of beauty. This time of year energizes Phil and he simply loves Augusta National, where he has cemented his legacy as one of the best players in the history of the game. A fifth Major and a fourth green jacket would put him in a whole other class of golfers, close to the likes of Tom Watson, Arnold Palmer and Sam Snead. Mickeleson’s short game looks dynamic once again, and a magical short game is what is the difference between winning and losing at Augusta.

I just can’t see Tiger doing anything great, especially with his putting woes continuing and the greens at Augusta (you just can’t see how much slope they have until you stand next to them!) no place to find your touch and stroke. He’ll be around the leaders but his late tournament fades have become troubling. It’s more mental than anything. I just don’t know if he really believes he can win, or if has chased all the bad stuff out his mind from the greatest fall from grace any athlete has ever had to endure.

I can see Johnson, Woodland and maybe Anthony Kim or even a guy like Mark Wilson jumping up and grabbing the green jacket. Johnson would be my best bet to do that among those guys. He’s not exactly on form, but if he can keep it straight and long off the tee he has to factor into the equation.

Some others to watch out for: Vijay Singh, Matt Kuchar, Rickie Fowler and Geoff Ogilvy.

If you are going to Augusta, lucky you. Drink in the surroundings, bite into a pimento and cheese sandwich, and enjoy the beauty that is golf at its highest level. If you’re watching on television, grab a cold one or two, don’t leave your Hi-Def widescreen and welcome in spring as it has been welcomed in for decades.