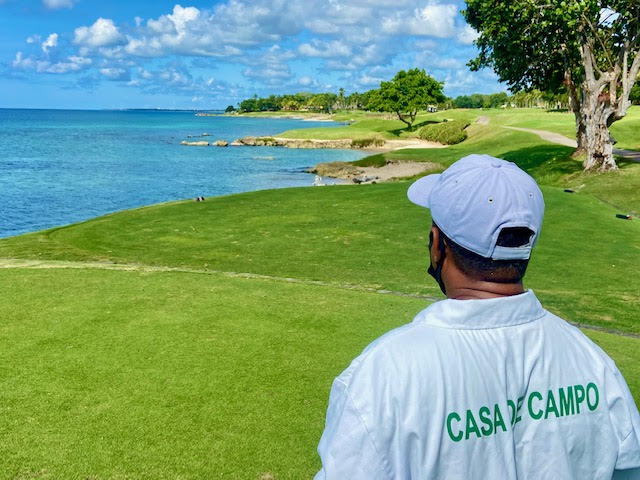 Pete Dye’s final resting place is on one of the scenic par-three holes he designed on Teeth of the Dog. (Photo by Harrison Shiels)

Montreal native Gilles Gagnon went from skating on ice to walking on water. After playing hockey for the Michigan State Spartans in the early 1970s he traded scoring goals for sinking putts to become the golf professional at Casa de Campo Resort in the Dominican Republic. The luxury resort’s Teeth of the Dog course plays along the Caribbean Sea – which is one big water hazard – but it was hazardous ice that led Gagnon to abandon his pro hockey career after MSU.

“I played for Port Huron and I slid off icy roads one too many times driving home to Lansing after night games,” said Gagnon, who also survived a team bus crash and a tough head coach in Ted Garvin, who went on to lead the Detroit Red Wings. “He didn’t like players who came from college hockey so he kept creating puck drills so the other players could crush me in the corner…which they did to gain his favor.”

Gagnon survived it all and is now an immortal as Casa de Campo’s golf professional emeritus. He is loved and respected throughout the golf world as is his late friend Pete Dye who designed the famed Teeth of the Dog and the resort’s other scenic golf courses including the Links Course and the dramatic Dye Fore course. Dye, a native Ohioan who also created landmark PGA Tour courses such as TPC Sawgrass; Whistling Straits and Harbor Town, chose to live, die and be buried at Casa de Campo (translation: house in the country.) The title of Dye’s autobiography “Bury Me in a Pot Bunker,” was fulfilled by his surviving family members and Gagnon, who took the ailing Dye for a sunset cart ride near the bunker in question on the golf course during has final days. “Pete looked across at the sea and I told him, ‘You’ve really done good, my friend.’ The moment provoked a smile and a tear in his eye.”

Gagnon has many enduring friendships. Michigander Bill Scaletta, from St. Joseph, heard Gagnon’s voice in an interview on my syndicated morning radio show. “What a joy it was to hear Gilles’ him again. It brought back memories of the last time I talked to him 50 years ago when I was his roommate in Case Hall at Michigan State,” said Scaletta. “I always wondered what happened to him. I tried look him up in Montreal once and was even near Casa de Campo once on a mission trip to La Romana but didn’t know he was there.” The two men had another unknowing close call when they each attended the 2021 Ryder Cup at Whistling Straits. They’re reconnected now.
Dr. Tom Jamieson hear Gilles on my radio show, as well. “Fortunately, I’ve known Gilles after playing dozens of times at Casa de Campo. I love the place,” said Jamieson who lives on the Country Club of Lansing where he’s played countless rounds with his son Parker who is on the MSU golf team.

Another Gagnon friend, Michigan PGA executive director Kevin Helm, called the show from him office overlooking Eagle Eye Golf Course near Lansing – a design Dye influenced and approved. Helm has led groups of statewide golfers to Casa de Campo for pro-am events. “Gilles is a great host and the ultimate gentleman. We had two great years there and it doesn’t get much better. We had an opening party right on the beach with dramatic lighting and an exciting setting. Whatever you’re looking for you can find it at Casa de Campo. Everything is reachable by personal golf cart,” said Helm, who hosted Gagnon for a nostalgic visit back to East Lansing a few years ago.

Parker LaPointe, a Ferris State University student from Traverse City, is presently serving a PGA internship at Casa de Campo among the resort’s staff of internationally intriguing pros from as far and wide as Canada, Argentina, Italy, Wisconsin and San Diego under the direction of Robert Birtel from New Orleans. “We have a very diverse staff. And out head caddie master is from Puerto Rico,” said Lapointe, who invited himself to the party by cold-calling the resort – and is now avoiding Michigan’s cold winter.

A Delta flight to Punta Cana and a one-hour shuttle drive will put you in the midst of Casa de Campo’s 7,000 gated acres of villas, beaches, pools, polo, shopping, shooting, spa, an Italian marina village, and surprisingly haute international cuisine, including Spanish croquettes and paella at Minitas Beach Club or mole tacos and margaritas at Chilango Taqueria in Altos de Chavon, the resort’s 16th-century replica Mediterranean village full of artists. It’s popular with the betrothed as its inspiring St Stanislaus Church and stately square and fountains over the Chavon River make for storybook weddings and photos.