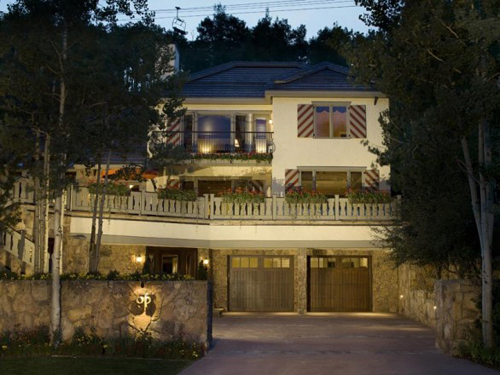 BEAVER CREEK, CO – Michigan’s President, the late Gerald Ford, is buried in his hometown of Grand Rapids on a shaded hillside along the Grand River beside the Gerald R. Ford Presidential Museum. But Ford maintained a home in Beaver Creek, Colorado, 12 miles to the east, of Vail, for the last 40 years of his life. It was his Western White House for the Republican President Ford. Gerald and Betty Ford lived in Beaver Creek for five months of each year; hosted celebrities in an annual charity golf tournament; ceremoniously lit the Beaver Creek Christmas Tree each year; and served as Grand Marshall for the Independence Day Parade. Serious business took place here, too, as Ford founded, in 1982, a forum called the American Enterprise Institute, which brought world leaders such as England’s Margaret Thatcher, Germany’s Helmut Schmidt, and the American Presidents to Beaver Creek. Now, you’ll encounter skiers from around the world each time you ride a Beaver Creek chairlift.

“I don’t think anyone did more to put Beaver Creek on the map than Gerald Ford,” Harry Frampton, Chairman of the Board of the Valley Foundation, told me as we sat in the Centennial Conference Room of the quaint and classy Inn at Beaver Creek, where Ford hosted an annual reception for the charities which benefited from his golf tournament. In 1981, Ford was one of the founding members of the organization, as Frampton explained. “For over 20 years President Ford never missed a single board meeting. He was there every month. And he was always there on time. He was also very active in contributing to the meetings.”

What was it like to sit in meetings with a former President of the United States?

“It was very intimidating sometimes. But I wasn’t as scared as my wife. The first time we were invited to a cocktail party at President Ford’s home, she was just as nervous as could be. But once we got to the house, Ford greeted her warmly and asked her at least ten questions about her and her activities. It calmed her right down. He was such a good person that way.”

Gerald and Betty Ford could be spotted anywhere in town – even grocery shopping in the local Safeway store.

“Of course he always had security agents around him, but we all knew them by name. It was very friendly,” said Frampton.

According to www.PresidentFordHome.com, Ford’s 10,000 square-foot home, at 65 Elk Track Court, was built in 1983 after Ford was offered his first choice of lots during the planning phase of Beaver Creek. Its’ seven bedrooms and nine bathrooms, as well as the exterior, underwent a $5-million renovation last year and the house is on the market for $14.5-million. Features which respected the historical context, such as the late President’s study and the mountain’s only private indoor swimming pool have been preserved.
“I have also added some special features to the home that will make certain it will forever be known as the former home of the American President,” says current owner Kevin Hayes, who closed on the purchase of the home through President Ford’s attorney, coincidentally, only hours before Ford passed away. “I know of no home of a former American President that has ever been available to the public with such an extraordinary usefulness.”

The home’s security quarters are bunkered into the hillside across the small yard behind the home. The house is most visible by hopping a ride on the Strawberry Park chairlift, just outside the back door of the Inn at Beaver Creek. (Ford’s home is three support poles up the lift on the left!) In fact, that convenient chairlift is the closest to a hotel anywhere in North America, (about 30 feet) which is reason enough to consider making the Inn your headquarters if you visit Beaver Creek. With only 45 rooms, it’s a homey escape from the hustle and bustle of the village area, yet only about 100 yards from the center of town. Staff members, who remember your name and tend to your needs quickly, make you feel, shall we say, very Presidential. You’re likely to encounter Presidents and CEO’s, business moguls and titans of industry who favor the Inn. When I asked the bartender if many celebrities stay at the Inn, he replied, “Celebrities? No. Our guests are more likely to be the people who hire and write checks to the celebrities.”

After a daily complimentary hot breakfast, that Strawberry Park chairlift, just beyond the wood-paneled ski lockers and out the Inn’s back door, lifts skiers to a potential elevation of 11,440 feet of elevation and 148 trails over 1,805 acres, with challenging moguls, steep sweeping runs through wooded passages, and gentle glides leading to the stylish villages of Beaver Creek, Bachelor Gulch and Arrow Head. The route I took to the Broken Arrow Bar stretched over four miles of varying downhill pitch with majestic mountain views the entire way.

Back in the Beaver Creek Village, you can enjoy outstanding dining at restaurants such as “Toscanini,” a trendy Italian eatery just beside Beaver Creek Village’s charming, year-round outdoor ice skating rink, or, near the resort gate, in Beaver Creek’s original homestead ranch house, a four-star, French, chef-driven gourmet restaurant with magical cuisine and atmosphere. There are romantic “on mountain” dining options as well, such as Beano’s Cabin, accessible only via sleigh ride, or, during the day, you can ski to the festive, themed Red Tail Camp, where the vegetarian chili is a spicy, warm-up option.

Rooms at the Beaver Creek in range between $200 and $400 per-night; a daily lift ticket at Beaver Creek, which allows skiing from 8:30 a.m. until 4 p.m., costs $80 for adults. There are various flight options into the Eagle/Vail or Denver airports from Michigan. Denver is about two-hour’s drive to Beaver Creek via shuttle bus or rental car. Vail/Eagle Airport is 25 miles from Beaver Creek, and Beaver Creek will give you a free lift ticket on the day you fly in just for showing your boarding pass and Vail Valley lodging confirmation. Visit www.BeaverCreek.com to have a look at the various amenities and even book travel (special discounts are available.)

President Ford made Beaver Creek his home; you and your family can be certain to feel at home here, as well.