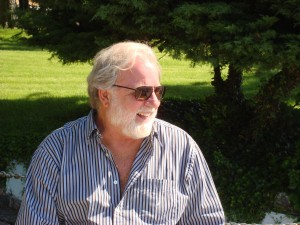 Pat Dailey in the sunshine at his island rental cottages at Put In Bay on South Bass Island in Lake Erie.

The infamous “gales of November” howl through the Great Lakes and evoke a sense of foreboding deep in the stomachs of seaman and sailors each autumn. But beer- bellied boaters simply swig suds and sing the songs of their legendary folk hero Pat Dailey, known concurrently as the “Great Lakes Troubadour” and “The Coolest S.O.B. in the World.” Even landlubbers grin when they hear Dailey’s concerts are intended for “mature adults…and boaters.”

Strumming from beneath his fishing cap and behind his white beard – reminiscent of Ernest Hemingway – the 72-year-old’s “Great Lakes Song” is a ballad schoolteachers use to help children learn the names of the lakes; while kids’ ears should be covered during his “Never Lie to you about Fish.” The rascally coot performs all summer at Put-In-Bay, the island resort in the middle of Lake Erie, and all winter at Hemingway’s hangout Sloppy Joe’s in Key West. He will make a rare appearance in Mid-Michigan, performing a free concert at Reno’s East, on Abbot Rd. inEast Lansing, Saturday, Nov. 10, at 8 p.m. The doors open to the public for a “Pre-Pat-Party” at 6 p.m.

Dailey’s appearance is being held on the anniversary of the “Wreck of the Edmund Fitzgerald,” the ore freighter which went down in stormy Lake Superior in 1975. In tribute, Great Lakes Brewing Company’s “Edmund Fitzgerald Porter” will be offered.

While Dailey seems to have lived his life on vacation – Hawaii, Steamboat Springs, San Francisco, Las Vegas, and Shipwreck Kelly’s in Chicago – it was a Great Lakes trip aboard a ship that inspired his best songwriting, such as his ballad and convinced him to settle in what he calls America’s “North Coast.”

“I looked out from the topside of that freighter and the lake looked like an ocean but the air was fresh. The sun was setting on the waves, it was peaceful, and I was moved,” said Dailey. Rougher waters had him penning the lyric “Don’t take these lakes for granted; They’ll go from calm to 100 knots so fast they seem enchanted,” in his ballad “White Squall.”

The fireworks and fun followed fast, though, when Dailey began singing at Put in Bay in 1978, playing cheeky songs like “Just How Drunk Are We Going to Get?,” “Big Money Walleye,” and “Legend of the Lake” for up to 3,500 people a night. Though there are comparisons, don’t ask him to sing a Jimmy Buffett song. “When Jimmy starts playing Pat Dailey songs, I’ll start playing his,” he barks with a twinkle.

Dailey jokes that he’ll be traveling via his 15-foot motorboat to perform at Reno’s in East Lansing, a fish tale of baloney that would certainly draw the catcalls and heckles he loves provoking from his audience. Dailey’s watery travels, played out in his songs and lyrics, will provoke tears and laughter, too.

For more information and his tour schedule, visit www.PatDailey.com

Michael Patrick Shiels, a Lansing-based travel writer, may be contacted at InviteYourself@aol.com or via www.TravelTattler.com

One Response to “The Great Lakes Troubadour Still Cruising At 72”