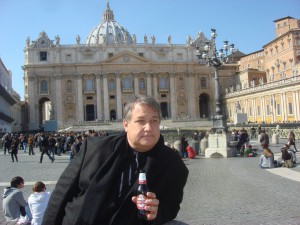 Vendors at the Vatican are in and around St. Peter’s Square offering souvenirs and refreshments.

My friend Father Jerry Vincke, a priest and Michigan-native serving as spiritual director of the Pontifical North American College, was squinting in the noonday sun on the building’s roof, clutching a bottle of Chianti and a bowl of pasta. He’d planned a humble picnic overlooking the grandest of settings as St. Peter’s Square and the world’s largest basilica, plus the papal apartments. The Vatican’s fanciful Swiss Guards were in full view below, too. A sweep of the eyes in the other direction revealed the River Tiber, the Seven Hills of Rome and the Eternal City’s landmarks.

“I never find this view anything but breathtaking,” said Vincke, who counsels the American seminarians selected to study at The Vatican – the world’s smallest city state and the headquarters of the Catholic Church. While not everyone can lunch on the roof, you can have Gelato at Vinckie’s recommended spot: Old Bridge Gelateria – near the Vatican Museum entrance. And, as Vinckie and I also did with Lansing seminarians Dan Westerman, James Mangan, and Zach Mabee, you can dine down the hill at an Italian restaurant on Piazza della Rovere named DivinPeccato which translates, ironically, to “Divine Sin.”

You can also see the Pope…guaranteed.

“I just got back from Rome where I had an audience with Pope Francis,” said Father Jake Foglio during a recent homily at St. John’s in East Lansing. “…It was just me, the Holy Father, and 100,000 other people!”

The easiest way to see the Pope is during the Sunday Angelus Prayer, which he delivers at noon, in various languages, for about 15 minutes from the window of the Papal Apartment above St. Peter’s Square. Be prepared to be moved by the pockets of people from around the world singing traditional songs in huddles and flying their native flags and banners. They rejoice and cheer when the Pope speaks a portion of his address in their national language.

The square holds so many people that you may stand where you wish and no attendance tickets are needed. “You can walk up five minutes before noon and be just fine,” said Vincke. Some free tickets are available for the Pope’s Wednesday morning audiences during which he actually appears in the square to pray at 10:30 but there is also plenty of ticketless standing room.

It is not so easy, however, to tour the Vatican museums, Michelangelo’s Sistine Chapel, and catacombs, however, due to the high demand on any given day. Based on the extensive walk-up lines I saw even early in the morning, I highly advise you arrange a guided, private tour in advance of your visit to avoid long waits to see the world’s most significant art collection.

There are plenty of gift shops on Borgo Pio adjacent to and around St. Peter’s Square, including the Vatican Post Office, from which you can send a uniquely-stamped postcard. A kiosk in the square offers refreshments, including the Italian beer Peroni, which I sipped in the afternoon daylight.