This is the final post in this series and I’ve saved the best of the four majors for last. You can read the previous posts here:

Why is The Open Championship the best of the four majors? The history. St Andrews, hosting every few years, is the home of golf. Golf was banned in Scotland in 1457 because the Scottish kings thought that people were goofing off playing golf and not practicing archery enough. Every golf addicted cubicle worker can sympathize with their 15th century Scottish brethren. James IV started playing himself and lifted the ban in 1502. The archbishop of St Andrews made a decree that allowed townsfolk to play golf on the St Andrews property in 1552. That’s a 463 year old golf course! That’s before Galileo was born. That’s before Shakespeare was born.

It’s not only one the oldest golf course it’s also one of the greatest golf courses in the world. It could have the greatest single golf hole in the world, The Road Hole. You hit your tee shot over a hotel. The eponymous road is not more than five feet from a green that the best golfers in the world are hitting long irons into. On the other side of the road there’s a rock wall. On the other side of that is out of bounds. Miguel Angel Jimenez intentionally hit a chip shot into the wall and it ricocheted back onto the green. Brilliant. If you’re a chump and you bail out left there’s a bunker there that you have to play backwards or sideways out from.

The Open is the most strategic of the four majors. In 2006 at Royal Liverpool (Hoy Lake) Tiger used his driver once in the entire tournament when it played 7300 yards and won by two strokes over Chris DeMarco. Super strategic.

Jean van de Velde merely needed a double bogey on the final hole of the 1999 British Open at Carnoustie to seal a victory. He chose to hit driver off the tee, pushed it right and got lucky to have avoided the burn. Then he doubled down on his bad strategy. He went for the green on his second shot. The shot ricocheted off the grandstands before hitting the wall on the burn and ended up in two-foot rough. His third shot finally went into the burn. He took off his shoes and socks and waded into the burn but he decided to drop instead. He hit his fifth shot in a bunker. He hit a great sixth shot and nailed the 6 footer for a triple that dropped him into a playoff. He lost to Paul Lawrie in the three hole playoff. Not very strategic. Here’s his Wikipedia page picture: 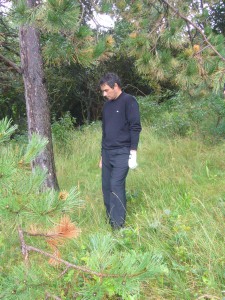 He’s in deep grass looking like he’s just about to make another horrible decision.

And then there’s Ivor Robson.

He’s the first tee announcer. If you don’t know who I’m talking about here’s a link to tour pros doing some decent and some really bad imitations of him.

And what quirky thing do other majors claim their own? The Masters has pimento sandwiches. At the 1982 Players Championship Jerry Pate threw the PGA commissioner Deane Beman and Pete Dye into the water on the 18th hole before jumping in himself. Now that would have been a great tradition. But the US Open and the PGA Championship have nothing, not even a weird sport coat.

So that’s it. And in the end how do they line up?