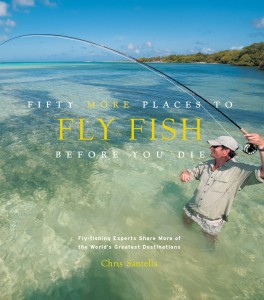 A few weeks back, I visited New Orleans for the International Fly Tackle Dealer show.  I would have preferred visiting Denver, the historical site of the show, as New Orleans in August is a little sticky for my taste.  (The day I touched down, the temperature was 97 and the humidity 90%, giving the Big Easy a heat index of 116 – nice!)  Nonetheless, it’s always fun to walk through hotel lobbies where almost every single person is wearing a technical fishing shirt and a hat bearing the logo of their favorite lodge, and every other conversation you overhear concerns an insect hatch or bait blitz.  I felt right at home.

I had several objectives going to this year’s IFTD show:  to visit with old friends, to take advantage of free beer at any number of industry events, and to help my friends at Anglers Book Supply promote my newest book – Fifty More Places To Fly Fish Before You Die.  My publisher – Stewart, Tabori & Chang – had generously created a blow-up poster of the book and had scrounged up a dozen or so books to give away (no small task, as the book had not officially arrived in warehouses from the printing presses in Asia).  The hope was to let fly fishing retailers in attendance – and anyone else who cared – that a new “Fifty Places” book would soon be available…perfectly timed for the holidays!  (There’s no coincidence there:  we estimate that nearly 75 percent of my books are given as gifts!)

Walking the show floor with friends, I was introduced to many new folks.  My pals would introduce me, saying “This is Chris Santella, the writer.”  The other folks would look at me and smile with a hint of pity, undoubtedly thinking “He must sit in his underwear in his mother’s basement, typing a blog that no one ever reads.”  After the pause, my friends would say, “He did Fifty Places To Fly Fish Before You Die.”  Immediately listeners would perk up, mentally dressing me in pants (at least shorts) and a shirt and placing me in a non-basement room, perhaps even in my own house.  Which is to say—people in the fly fishing world know and respect the book, even if they don’t know me.  And that bodes well for the success of the second Fifty Places fly fishing book.  For better or worse, brands work.  And the Fifty Places series has, much to my amazement, become a small brand. 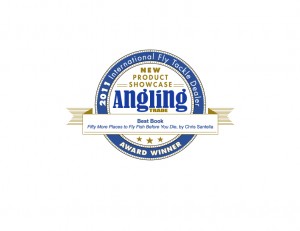 The award logo -- there's a trophy, too!

It’s my hope that the follow-up to my first Fifty Places book will fare a bit better than some of the big screen sequels that we’re tortured with each summer.  Fifty More Places To Fly Fish Before You Die follows the same formula of my previous books – interviews with knowledgeable people from the fly fishing world talking about some of the world’s most exciting angling destinations – all enhanced with beautiful photographs.  Whether it’s mako sharks of San Diego, golden dorado in Bolivia, bonefish off Los Roques, Venezuela or giant rainbows on Alaska’s Kanektok, the book tries to capture the excitement, the passion and the joy of fly fishing – and how place informs our experience.

There was a new twist to this year’s IFTD show – the new product showcase, which was sponsored by Angling Trade magazine.  Whether it was because of the pretty poster, voter’s familiarity with the first book, or an act of pity, I was very proud to learn on the second to last evening of the show that Fifty More Places To Fly Fish Before You Die had won the best new book award for 2011!

I half expected snow to begin falling through the balmy 92-degree air.