The short seventh at Mayakoba, with Las Brisas Restaurant and the Caribbean in the background.

Mexico’s Yucatan Peninsula – the arm of land that extends north and east into the Caribbean Sea from the Central American nations of Belize and Guatemala – has become a favorite escape for winter sun-seekers.  The region’s largest city, Cancun, offers non-stop nightlife that’s sure to appeal to spring-break style revelers, and broad beaches for nursing the morning’s inevitable hangover.  Further down the peninsula, hints of an older, calmer Mexico appear, though the tourism interests are expanding their claim along the Caribbean.  These include the birth of many new golf resorts.  “It used to be that Acapulco and Cabo San Lucas were the golf spots in Mexico,” said Bill Hogan, president of Wide World of Golf.  “Within the next ten years, the Mayan Peninsula will exceed those venues, thanks to the many fine new courses being built.  There’s, there’s Moon Palace (a Nicklaus design), Playa Mujeres (by GregNorman) the Hilton Cancun and El Camaleòn (also by Norman). There are at least four more being built.  The resorts around Cancun provide excellent quality and great value.”

El Camaleòn was created on a parcel of land that encompasses three distinct landscapes – tropical jungle, mangrove swamps and seaside beaches; the contrasting settings inspired the course’s name (The Chameleon in Ingles), though an assortment of geckos and iguanas are certainly present on the grounds.  The course is further distinguished by the limestone canals that meander through most of the layout, pulsing with clear, inviting water.  The canals are testament to a geological phenomenon found through much of the state of Quintana Roo, on the eastern side of the Yucatan Peninsula.  The surface strata consists of porous limestone, remnants of what was not so long ago (in geologic terms) an ocean floor.  Over thousands of years, rainwater filtered through the limestone, creating an extensive series of underground rivers.  At El Camaleòn, the surface strata has been excavated to expose the rivers.   The Yucatan is also well known for its cenotes (pronounced “say-no-tays”), sink holes providing entry to the cool underground rivers.  In fact, a cenote graces the fairway of the 558-yard opening par 5 at El Camaleon; at 300+ yards from the tee, it provides an excellent target for most of us.  For the big straight hitter (or the duffer who badly misses his/her second shot), a shot in here will mean a stroke and a drop.  (The Mayans revered cenotes, viewing them as portals to a spiritual world below the earth.  At the nearby ruins of Chichén Itzá, divers have discovered jewelry, pottery and human skeletons, believed to be offerings to the gods.)

“I think that Greg did a great job with the design,” said Fred Funk, who won the inaugural Mayakoba Golf Classic in 2007, the first PGA TOUR event to be based in Mexico..  “It’s hard to lay out a course that walks the line between being challenging for professional-level players and enjoyable for higher-handicappers, but Greg pulled it off.  El Camaleòn is a fun course to play, as it doesn’t beat you up with its length.  All the grass on the course is seashore paspalum, mowed at different heights for the greens, fairways and rough.  It has a very pristine look, and the playability is excellent.  The ball really sits up, like you’re hitting off carpet.  While it’s not particularly long, there’s not a lot of room for error; if you stray far from the fairway, you may find yourself in the mangrove swamps which come into play on many holes.  Go into the mangroves, you’re done.  The wind certainly is a factor, especially on the east/west holes—it’s one of the defenses the golf course has against par.”

The ever-changing landscape and constant presence of the canals (which attract abundant birdlife) makes a round at El Camaleon a visual feast.  For Fred, the track’s par 3s stand out from a playability perspective.  “I like the fact that they’re not 240 or 250 yards—par 3s that long are not much fun to play.  The seventh hole abuts the beach, looking right out to the island of Cozumel.  It’s only 125 yards, but the wind coming off the Caribbean makes club selection tough.  You need to figure out how to keep the ball out of the wind.  Number ten is the longest par 3 (at 220 yards) and has massive green, with a clear water-filled quarry and limestone cliffs to the right.  The fifteenth (153 yards) sits back up against the ocean again.  The wind can make my club choice swing anywhere from a five to a seven iron.”

If your game isn’t working exactly as you’d like, El Camaleon is a great venue for a tune-up – it’s the site of the recently opened Jim McLean Golf Academy at Mayakoba, the only McLean facility in Mexico.  The school features a two-bay “SuperStation” where JC Video Swing Analysis is used to help students understand the fine points of the swing.  One and two-day programs are available; both include playing lessons.  “We don’t try to impose a strict method on our students,” McLean said when I spoke to him at the Mayakoba Academy.  “Everybody is built differently, and there are a lot of different ways to make a golf swing and do it well.  In our teaching method, you can do it your own way as long as you stay within the parameters or limits where we find good players who have been able to do it very well.” 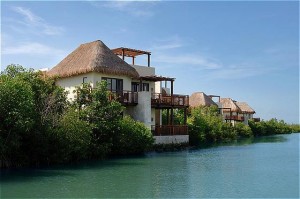 Most of the casitas at Fairmont Mayakoba rest along the canals; several are beachside.

For the PGA TOUR players who make the effort to go south of the border, part of the pleasure of playing El Camaleon is the relaxed setting at the Fairmont Mayakoba, selected as Fairmont Hotels & Resorts “Hotel of the Year”.  “The resort is very well done,” Fred Funk added.  “There are a number of wonderful pools for the kids, a nice spa and a beautiful beach.  There’s everything you could hope for to make it a nice experience for the family.”  Most of the accommodations are in casitas resting along the aforementioned canals; tall windows let in plenty of light, and you can greet the morning on the deck overlooking the lagoon.  Marble bathrooms are appointed with soaking tubs and immense glass-walled wall showers.  Several beachfront casitas let you drink in Caribbean views from a private terrace or nearby infinite pool.  A tamarind margarita on the terrace at Las Brisas Restaurant, resting above the Caribbean, is perfect ending to a day in this sub-tropical paradise.

Getting There:  El Camaleon is 42 miles south of Cancun, Mexico’s Yucatan Peninsula.  Cancun is served by most major carriers.

Accommodations:  The Fairmont Mayakoba (800 441 1414; www.fairmont.com/mayakoba) has 401 rooms overlooking either the canals or beach.