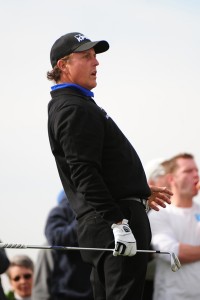 Who’s hot: Unlikely winners. Add Gary Woodland to the roll call of unlikely winners on the PGA Tour this year.  He joins Jhonattan Vegas and D.A. Points on the list. Heck, let’s even throw in Mark Wilson, who has won twice this year. Even though Wilson had two PGA Tour titles to his credit, he came into 2011 ranked outside 200th in the world. On that note, Sal Johnson from golfobserver.com compiled a list of where this year’s winners were ranked prior to winning their tournament. Only Match Play champ Luke Donald was in the top 10; and only two were in the top 35. Here’s the list:

Will the trend continue this week? Don’t bet against it.

Who’s not: Phil Mickelson. Mickelson got off to a solid start, finishing second at Torrey Pines. However, he hasn’t done much since then. Only 1 top 10 in his last five tournaments. He placed 55th in the Cadillac Championship, finishing with a horrible 76 on Sunday. Mickelson begins his run-up to the Masters at the Arnold Palmer this week. Is his recent poor play an indication we shouldn’t expect much from him at Augusta? Hardly. Last year, he had only 1 top 10 in seven tournaments going into the Masters. And he walked away with another Green Jacket. Just the same, I’m sure Mickelson wouldn’t mind a strong showing this week.