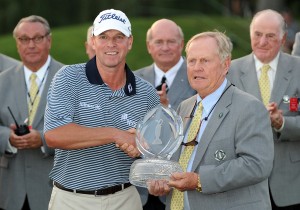 On my Crain’s Chicago Sports Business blog today, I wrote:

Question of the day: Would you rather have an annual PGA Tour event in Chicago in July without some of the bigger stars? Or would you prefer a FedEx Cup in September with a stronger field? However, it’s only going to be here every other year at best.

I’ve been thinking about that question with the John Deere Classic set to tee off Thursday in the Quad Cities. As improbable as it seems, it is the only regular PGA Tour tournament to be held in Illinois.

As I’ve lamented many times over, after this year’s BMW Championship at Cog Hill in September, the tournament will begin to migrate throughout the country. Next year’s BMW will be in Indianapolis. The 2014 event already has been awarded to Cherry Hills in Denver. It seems likely the 2013 BMW will be in Chicago, although probably not at Cog Hill. I’m hearing Kemper Lakes as a leading candidate. However, Western Golf Association officials aren’t making any guarantees, with San Francisco being mentioned as a possibility.

Meanwhile, thanks to a long-term commitment by John Deere, the folks in the Quad Cities know the PGA Tour will make an annual stop in their area for many more years. Tournament director Clair Peterson runs a great event. He came up with the ingenuous idea of arranging for a charter plane on Sunday night to shuttle players in the field to England for next week’s British Open. There are 20 players set to be on the plane, including defending British Open champion Louis Oosthuizen and 2009 winner Stewart Cink.

Neither champion would be at the John Deere if not for the charter. It definitely has strengthened the field in recent years.