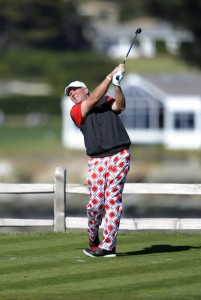 John Daly the idiot is at it again. Yesterday, he gave an interview to radio station in Atlanta. Among the themes were Tiger Woods and his definition of adultery. It takes stupidity to a new low.

Gary D’Amato the Milwaukee Journal-Sentinel has the text of the interview. Here it is:

Did you talk to Mallett about personal responsibility and how things might have been different if you had made better choices?

“I set myself up a lot back in the day to get ridiculed. And I deserved it, because I did some stupid things — whether I quit on the course, walked off, or threw a club, or did something stupid off the golf course — destroy a hotel room or whatever, I mean I’ve done it all. Luckily everything I’ve done was legal; I’ve never done drugs, thank God. But you don’t think about things when you’re on top of the world, you don’t think about those type of things. And when I look back I wish I did, because whether it’s one fan, millions of fans, thousands, your peers, the peers that you’re playing with, your teammates, whatever — when you do something bad, it’s going to hurt not only you but someone else. And that takes a lot away from you as an individual. I mean, you can look at what Tiger’s going through. It’s embarrassing. Is he embarrassed? Hell, yeah, he’s embarrassed. Any time we do something bad we’re embarrassed, but the way I’ve felt good about myself is I’ve always been honest. Whether I’ve done good or bad, I’ve always told the truth. And it gives the media a one-day story instead of a prolonged eight, nine months story that Tiger’s was.”

Did you have the chance to say that to Tiger?

“I did last year at the PGA. And what we talked about I couldn’t even fathom kind of telling you guys because it’s a personal conversation, but it made me relieved of what Tiger was going through. Do I blame Tiger for what he did, and does he? Yes. But does he have a reason? Yes. And that reason is something I don’t want to talk about. But I told him, ‘If you would have come out that night after the incident and told the world what was going on — not listened to your agents, not listened to anybody else, just what your heart said and thought what you just told me — this story would have ended in one day.’ And he said, ‘I know, I know. I just had to listen to everybody.’ I said, ‘That’s the thing you’ve got to understand,Tiger, you’re the greatest player that’s ever played, you don’t have to listen to anybody. You have to listen to what your heart tells you to do.’ And he says, ‘I thought about talking to the media right after it all happened, I really did, and told them the truth and told them what was going on. But I was told not to.’ So, I don’t blame him in that aspect of listening to the bad advice, which I totally think he got throughout the whole situation.”

Was he talking about that first Thanksgiving night, or after when all the sordid details emerged?

“Afterwards, afterwards. I think everything afterwards that everybody found out about.”

So, there was some way to get people to at least partially understand what was going on had he come out and spoken candidly?

“Exactly. I mean, you’re looking at a guy who all the way through his college days, all there was was golf, golf, golf, golf golf. And then there was more golf. And then there was more golf. The guy never had a chance to live a life, and you know, certain things that people go through they find out they like and don’t like. And as a young man or whatever, there’s certain things you like and certain things you don’t like. He found out late what he really liked because he was never around it. He didn’t have a chance to find out what women were like and what girls were like that much until he was in his late teens, late late, almost 20. I don’t think folks realize that.”

But doesn’t everybody lose the right to have sex with others after making the decision to get married?

“Well, you should if your wife’s good and makes love to you when you want to be made love to, and does things with you and wants to do things with you, and wants to support you, and wants to be with you in your career, wants to take the selfish side of the player. I mean, in this sport, in major sports no matter what, even a guy that runs a multi-billion dollar corporation — a woman has to understand that it’s a lot on a person’s shoulders to deal with. You can either be a part of it, supportive and keep going, and not go your materialistic ways that I’ve been through. My exes, if you look at my life, they just quit supporting me. Plus, they didn’t want to have sex anymore. And when that happens — and I’ve always been straight up front with every one of them — I said, ‘If you’re not going to give it to me, I am going to go get it somewhere else.’ And that’s just the way I’ve been whether there’s a ring on my finger or not. Is that adultery? Maybe so, but from what I understand, when you’re married they’re supposed to give it to you.”

So Woods should have gone up to a podium and said ‘I’m not getting it anymore, I’ve had enough.’?

And that would have kept the story from blowing up into the media circus that it became?

“I think so. You wouldn’t have had 127 or 128 women come out and say they had sex with Tiger. I mean, if people really believe that Tiger had sex with 127, then we’re not really as smart or common sense as we think we are. I mean, come on.”

And finally, if Daly could play one course with four people, where would it be and with whom?

“It’d be like Angelina Jolie, Drew Barrymore, I still love Meg Ryan … it’d be all girls. It’d be wherever they want to play.”