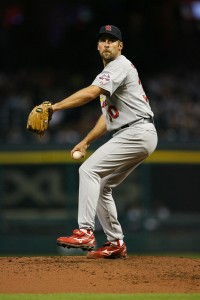 I don’t know about you, but I took great pleasure in seeing John Smoltz implode last week.

For those of you who don’t know, Smoltz, a scratch golfer with designs on playing on the Champions Tour, received an invite to a Nationwide Tour event in Georgia. Let’s get started with the dream, right?

The good news for Smoltz is that he broke 90. The bad news is that he didn’t come close to breaking 80.

Smoltz shot 84-87. At times, he surely looked like he was filming one of those Southwest Airlines “Wanna get away?” commercials.

This was the baseball equivalent of giving up 7 runs without retiring a batter in the first. A complete embarrassment.

Smoltz, though, shouldn’t feel too bad. All his futility showed is that golf is a hard, hard game. There is a huge difference between playing with the boys at the club and playing against pros. I’d put that yardage at three light years.

It also shows that if a world-class athlete like Smoltz, a definite Hall of Fame candidate, can get whipped in golf’s spotlight, then perhaps we shouldn’t feel too bad about our games. It turns out we’re no closer to playing with the big boys than he is.