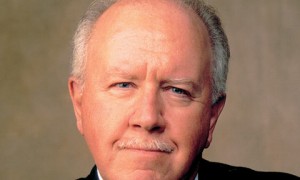 “He climbed out of bed for what must have been the tenth time that interminable Sunday night. Making certain he did not awaken his wife, he made his way silently onto the balcony off the bedroom of the hotel high atop a hill. Clouds hung low over the dark Irish Sea, but he could still see the outline of the Ailsa Craig miles off the shoreline. A sliver of Scottish moon sprinkled shadows across the land.

“The grandstands, empty and cold now, hid the 18th green from view, but there was no shrouding the huge, familiar old yellow scoreboard off to the left. He did not have to squint to read the names still at the top. He would see them imprinted on his intricate mind for all time.”

Damn, I thought after reading the opening two paragraphs to his book on Tom Watson’s near miss at Turnberry. If only I could write like Jim Huber.

Then again, if only I had a golf swing like Ernie Els.

I think Jim would like to see his writing prowess being compared to Els’ swing. Graceful, effortless, and memorable.

Like everyone else, I was stunned to hear about Jim’s sudden passing this week. Too bad he wasn’t around to read all the tributes that poured from so many different people.

Jim was the consummate pro in every way. He had the ultimate respect from everyone in the business.

And envy too. In age when everyone seems to shouting all the time on television, Jim still relished the written word. His essays on CNN and TNT were truly memorable and moving. His former colleague Inga Hammond said she would have to watch them two or three times prior to going on because she didn’t want tear up while on the air.

Like so many other people in the business, I considered myself lucky to have Jim as a friend. He was a frequent guest on our golf radio show in Chicago.

I’ll never forget the last email I received from him.

I sent a note telling him how much I enjoyed the Watson book. He wrote back: “I can’t tell you how much your words mean to me.”

It almost felt as if I validated Jim’s effort on the book. Jim didn’t need me to tell him how good he was.

Then I thought about it. Perhaps, he just appreciated somebody took the time to read his book and felt compelled to make a comment about it. Isn’t that we all want as writers?

Do yourself a favor and pick up a copy of Jim’s book on Watson. It is Jim’s major winner.

Thanks for all you did, Jim. Hit ’em straight.