This is Part IV in a series of five posts chronicling my trip to Bandon Dunes Golf Resort from January 12-17, 2012. Read the other related posts here. 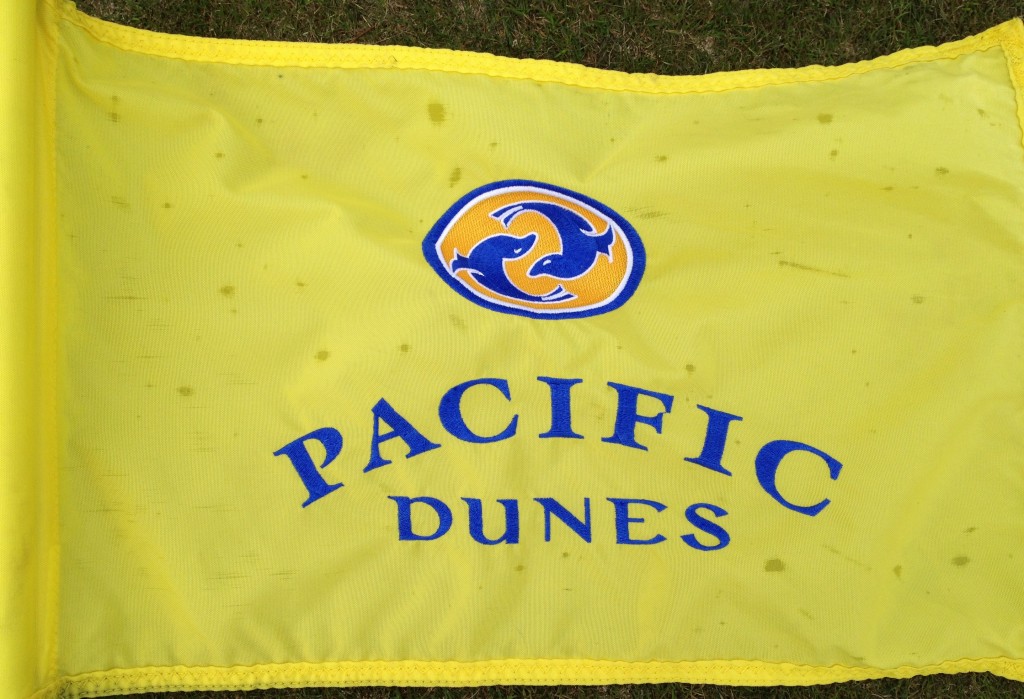 Sunday morning’s forecast sounded ominous.  The temperature was expected to drop into the mid-30s and a cold and wet Alaskan jetstream was headed straight for the Oregon coast.  We packed our rain gear and headed out for the practice center.

After a brief spell on the chipping green and the driving range, Mark and I decided to warm up for our round at Pacific Dunes by playing the Par 3 course, Shorty’s. I was expecting a typical “practice-style” nine hole warm-up with bland hole set-ups and poorly conditioned greens.  I was dead wrong.

Shorty’s is a true delight.  It makes splendid use of native plants and trees to frame the greens. Because most of the holes are between 100-150 yards, there is less need to account for bailout areas around the pin.  The extra space allows for zen-like arrangements of native shrubs, trees, and rocks right next to the putting surface.  The result is a quick and fun warm-up round with all the natural beauty you’d expect from a course at Bandon Dunes. 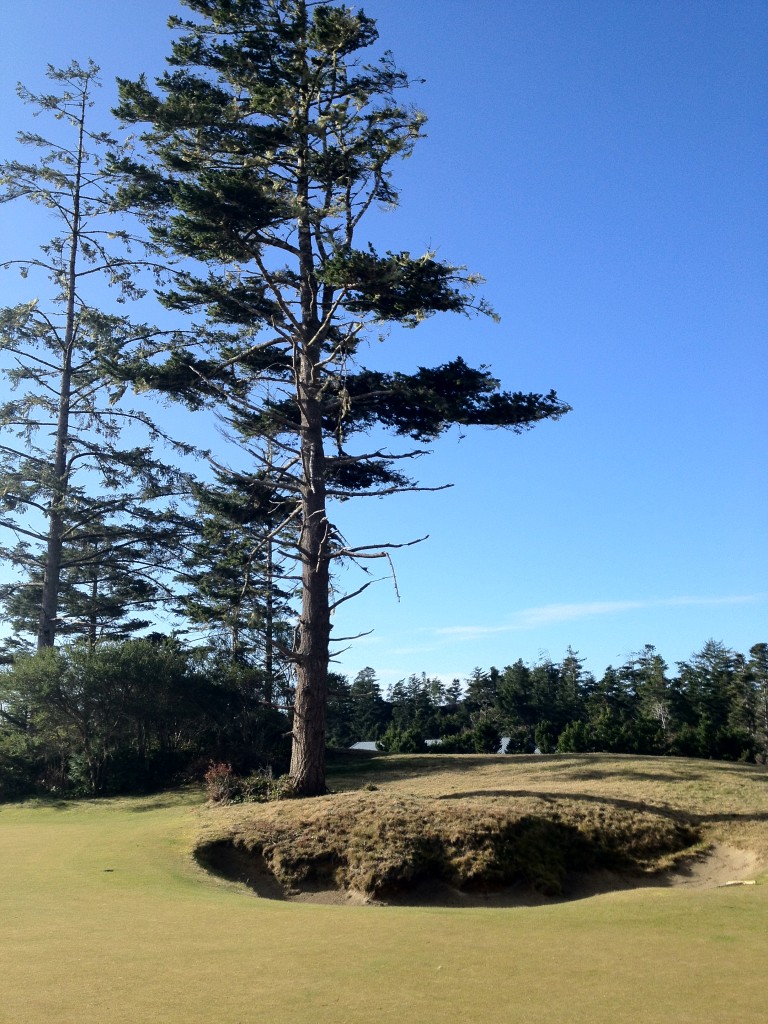 Despite being considered a “practice” course, Shorty’s is excellent Par 3 warm-up and features interesting vegetation arrangements near the greens. 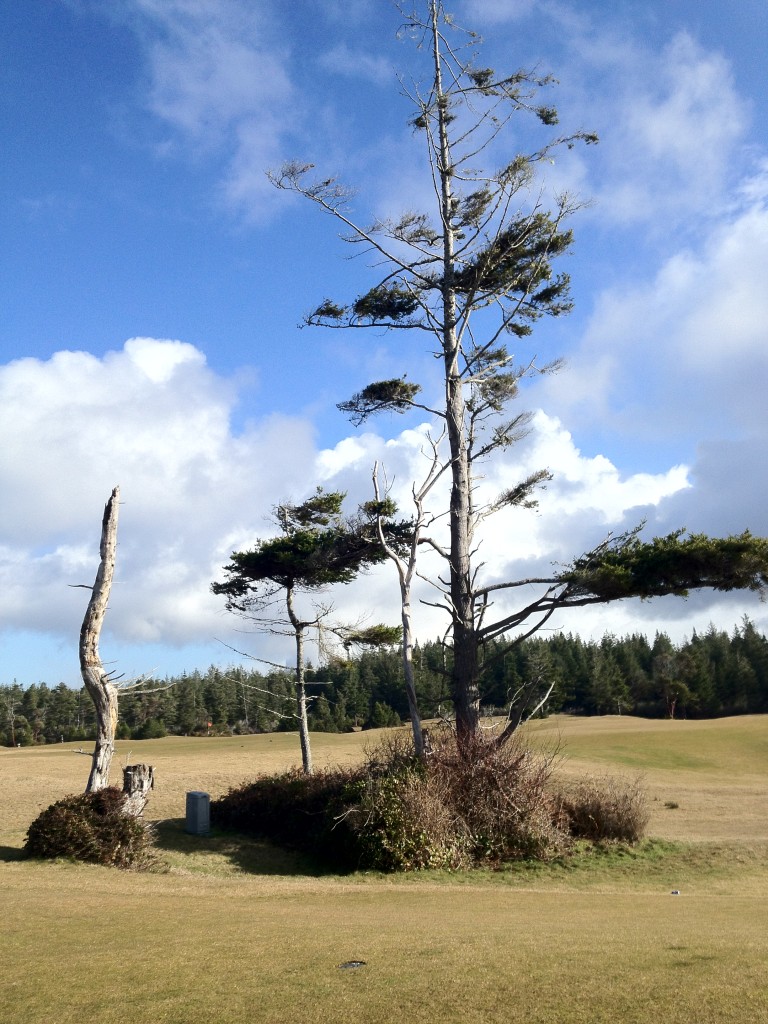 Mark and I eschewed caddies for our rounds on Sunday and Monday.  We thoroughly enjoyed having Richard and Alden on our bags for the first two days, however, we needed a break.  We spoke at length over dinner the night before related to our impressions of the caddies, individually, and also about using a looper in general.

We both felt that the local knowledge with winds, club selection, and breaks in the green were extremely valuable.  However, when 99 percent of the rounds you play are without a caddy and you step into the situation of having one, there can be a tendency toward information overload. Whereas Mark and I both rely a good deal on feel in our games, our rounds with caddies became more technical. We emoted much more about our mechanics and generally felt less relaxed.  I don’t think it was playing with people watching so much as it was having a larger number of individuals always around your shot.

When we played Bandon Trails, there were nine people in our group: four golfers, their four caddies, and a caddy in training.  When you’re used to play twosomes, threesomes, and foursomes at your local muni, an entourage constantly following your round can be overwhelming. With that in mind, we headed toward the first tee of Pacific Dunes with just a pullcart in tow.

We stepped onto the first tee and we introduced to our playing partners, Jeff and Tracy, both from the Olympic Peninsula in Washington State.  The clouds had already begun to gather and the winds picked up.  For some reason, I didn’t feel as loose as I would have liked. Despite the practice at Shorty’s and my long-time anticipation of playing my first Tom Doak course, I didn’t feel mentally relaxed.  My mind mirrored much of the weather around us and it would unfortunately carry on throughout much of the round.

I immediately warmed up to the course on the Par 4 2nd hole, a whimsical two-shot hole of 368-yards. Though the pronounced tilt of the fairway is evident from tee, you do not get a true sense of the fairway’s slope until you get into the middle of the hole.  Despite a hooked drive over by the pine tree to the front left of the fairway, I managed to get on the green in regulation and two-putt for par. Earlier in the trip, I had heard some caddies remark that the greens at Pacific were unremarkable in terms of the quality of the roll. I noticed this a bit on the 2nd green, but reserved judgment until I had seen more of the course.

In between the 3rd and 4th hole, a system passed over the course.  Jeff and Terry suggested that we take shelter by the snack shack by the 4th tee.  Mark and I did as suggested and hung out under the shack’s roof while Jeff and Terry ordered hot coffee.  Not knowing how long the cell would take to pass, I suggested to Mark that we put on our rain gear and get going.  Jeff and Terry seemed surprised, but obliged.

When Mark and I got to the 4th tee, which sits right on a cliff overlooking the Pacific, we bundled up.  We were ready for the infamous Bandon weather we had heard about all these years…and sure enough, we got it.  As Mark teed off on 4, pellet-sized hail was literally blowing into his face sideways.  The conditions were definitely difficult but we seemed to enjoy the hole even more because of it. It’s not everyday you get the opportunity to play a round of golf through hail. Some might call it folly, I call just another part of the adventure.

On the 9th hole, I began to get a bit frustrated with the course’s routing.  Thus far, I had enjoyed the quality of golf — exacting shots were required, wayward ones penalized, and Doak’s design philosophy was evident.  However, the entire course seemed a bit cramped to me.  Granted, part of the appeal is that the holes are close together.  This is reminiscent of the courses in the British Isles and promotes walking.  But the 9th tee is an example of Pacific Dunes lacking adequate space, almost to the detriment of another golfer’s safety.

The tee box on 9 faces a large horizontal ridge about 150 yards in the distance.  It features two sets of greens and you need to check the sign leading up the tee box to determine which green is in play that day.  We were playing the upper green and therefore a tee shot to the right was preferred.  I overcompensated and badly pushed my drive right.  While the fairway is generous, I missed too far right.  When I got over the ridge, I was surprised to see that my ball had landed only about 20 yards in front of the 6th tee box.  While I hit a bad shot, it was not a some sort of banana slice that missed wildly.  What caused the most concern is that the line of play on 6 is such that a golfer teeing off would not notice an incoming tee shot from 9.  Furthermore, because I was behind a ridge, I had no idea that yelling “fore” was needed (nor would it have been heard). 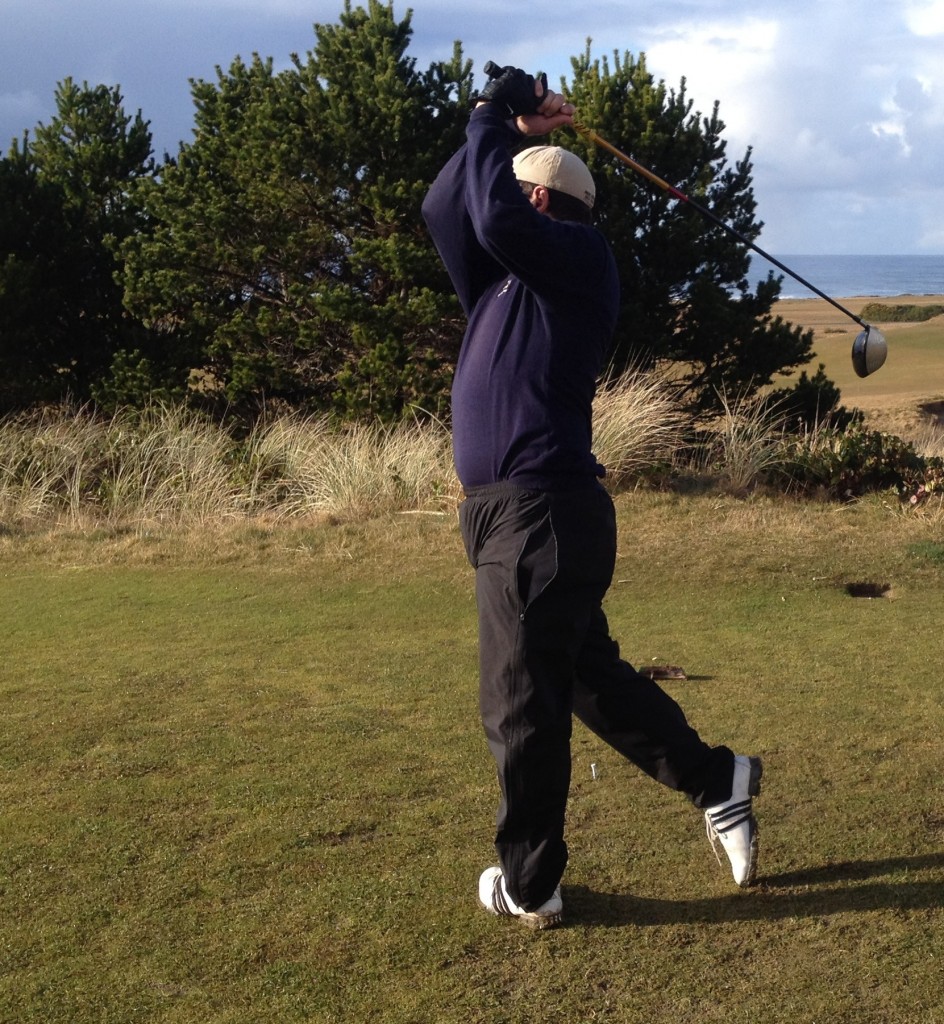 Finish my shot off the tee on the 9th. A bit of the Reverse C going on. Is that a good thing or a bad thing?

I got the same cramped feeling on the Par 3 11th.  In a highly unique manner, Pacific Dunes starts its back nine with back-to-back Par 3s.  I loved this idea in theory, but it didn’t seem executed as well as I had hoped.  The 11th feels like an afterthought due to its very short length (It played 108 yards that day).  But with a hole so beautiful, it’s also hard to call it an afterthought.  This was a prime example of the peculiar paradox I had felt all day.  Pacific Dunes is so highly praised that I wondered if I had let opinions from others color my judgment.  Adding to this is the very cerebral nature of the course.  On the one hand, I loved so many aspects of the course (the 13th in particular) and on the other, I didn’t find myself having much fun or quite understanding the course as I had hoped. I did, however, keep me thinking the entire round, which I guess is a good thing.

Any reservations I may have held prior in my round gave way on Pacific Dunes’ 13th hole.  Much like my experience on the 15th at Bandon Dunes, time seemed to stand still as we played the entirety of the hole.  The cold and wet weather had passed.  The sun was out, albeit briefly, and the shadows began to get long in the late afternoon sun.  From the tee, the ripply undulations of the fairway beckoned.  Off in the distance, up by the green, was the most magnificent natural blowout bunker I’ve ever seen.  Created completely by nature, it stands tall and proud to the right hand side of the green. The 13th’s location atop a seaside cliff made for very windy conditions around the green. I managed a bogey despite the wind playing well into our face.

The 13th is just as beautiful, if not more so, when looking back down the fairway from the green.  And it’s moments like that in any round that capture you, that keep you coming back, that make it difficult to explain to those that do not play the game just what kind of magic one can behold on any given day of golf. 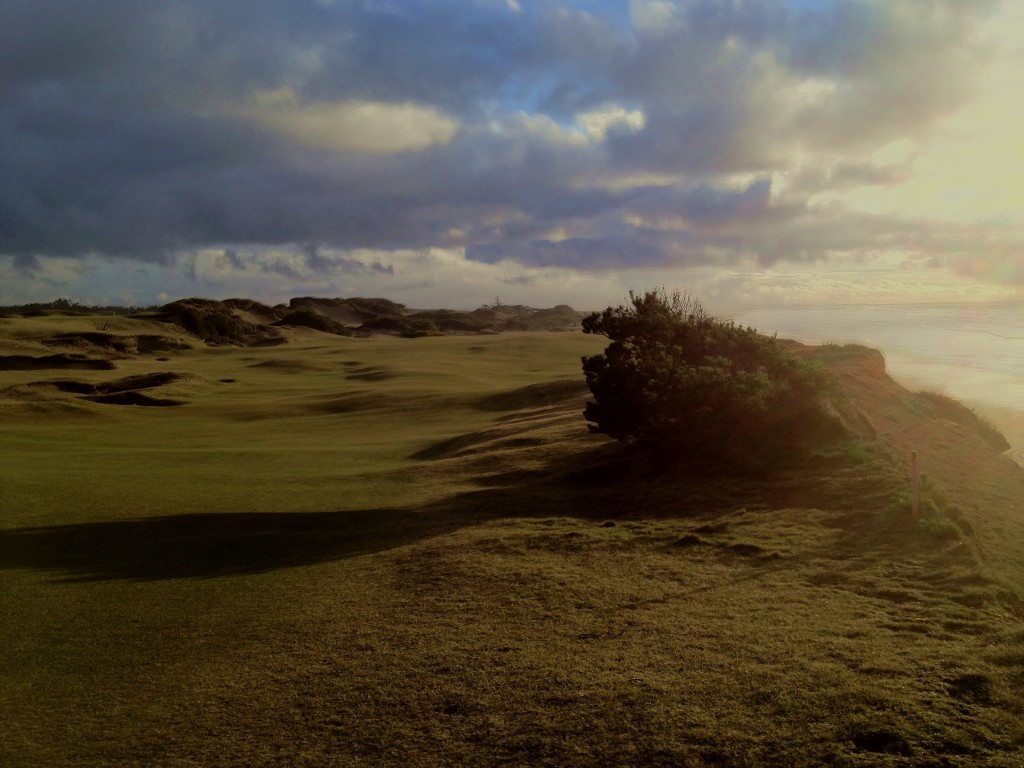 A view looking back down the 13th fairway from the green. My honest opinion is that this is the most gorgeous hole on the property.