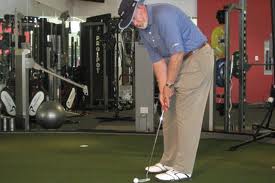 There is probably no worse feeling in golf than missing a short putt, especially when something is at stake, a trophy or even a small bet. That had to be the reason that a recent survey by the Dave Pelz Institute showed the short putt as the most feared shot in golf.

We all miss them, even the touring professionals. In fact, Pelz (pictured) confirmed in his new book “Golf Without Fear” that his research showed that amateurs perform closer to the level of pros on short putts than they do on any other shot.

In regular play at most courses, these short putts of up to three feet or those within the leather—that area between the putter head and where the grip starts–are usually conceded.

The golfers in my regular golfing group back at the Brookhaven Country Club in the 1980s used to put a piece of black tape about 18 inches up on the shaft and these putts were considered “gimmes”where we did not have to putt them. There was one player, Johnny Bradshaw, who used to really agonize over those putts between the black tape and the end of the grip and ended up missing a lot them in the worst case of the yips I had ever seen.

At the Hillcrest Counry Club in Vernon, Texas, there was a piece of black tape at about 24 inches up the flagstick that indicated “gimmes.” This once created a problem for me when I served as the tournament chairman for the club championship. Many of the players didn’t read the rules and were picking up these “gimmes.” I didn’t find out until I ventured out on the course and saw the other two members of my rules committee doing it. Oops! What was I to do? I took the easy way out and simply handed in my resignation as the tournament chairman. It seems that the regulars at the club had always played that way even in tournaments and I was not aware of it.

Some golfers have found ways to try to coax “gimmes” from their playing partners by using the following antics:

*Pretending they can’t find their ball marker, jiggling coins in their pocket to show they are making an effort and hoping that you’ll say that the putt is good.

*Walking up and leaning over on one leg and making like they are trying to avoid your line before making what they think you will not think is a serious attempt.

*Hitting the putt with the back of the putter and saying something like “that’s always good in my usual group”.

*Knocking back your three-footer with hopes that you will return the favor. It usually works with me.

On a more serious note, there are players in match play who will be generous early in the round, but will make their opponents putt everything later in the round when the pressure is really on. Count me among that number.