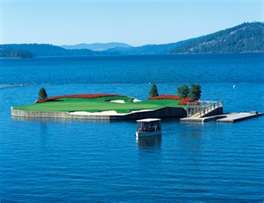 If you want to spruce up the fun side of golf a wee bit, here’s a clever game to try in your golf league, foursome, buddies trip, or usual weekend group.  Best of all, it is great for good and not-so-good players alike and will always have you grinding even if you think you are out of a hole or the match.

Everyone antes up $5 and gets one poker card for – and here’s where you can pick the combinations – a one-putt, chip-in, sandie, birdie (2 cards for eagles), fairway and/or greens hit, etc.  You can  also pick the hardest couple holes and award a bonus card for parring those.  For every three-putt, you are assessed an additional dollar just so you don’t get reckless going for those one-putts.  And, the one-putts are calculated from off the green, as any tour statistician would do.  At round’s end, over cocktails and beers, all is tallied up, debts are paid, cards are dealt, and whoever has the best 5-card poker hand wins the entire pot, unless you wish to divide it up into first, second, and third place.

Last week I was on a media golf trip to the superb Circling Raven Resort near Coeur D’Alene, Idaho.  On the second day we headed to Coeur D’Alene Resort – with the famous floating island green – and we all played the Poker Game, which I’d never done before.  With steely-eyed focus (and a bit-o-good-fortune) I one-putted the first 8 greens and lipped out for birdie on 9….for 35.  True, on most holes I was just off the green on the frogshair, but there were also some good pitch and putt saves on that lovely course nestled on the bluffs of Lake Coeur D’Alene. We were awarded a bonus card for hitting the island green 14th, which I did, and got to enjoy the short boat ride to and from the maritime green complex while the captain was issuing certificates to players.  The verdict is still out as to how much this green cost to build, with estimates ranging from $1 million to $5 million.  I might need a few more one-putts to pony up for that.

After golf, I had amassed 13 cards but it was not enough to best ‘Canada’ Bruce, whose full house beat my Ace-high straight.  Still, everyone had fun because they realized they were never out of the hole no matter how badly they played; they could still make a putt or a chip and gain a card.  I found myself thinking about Dr. Bob Rotella’s newest book, ‘The Unstoppable Golfer’ where he touts the importance of confidence in the short game as the most important talent to have – along with rock-solid fundamentals and never-fail shots.  (Watch for a review on that book here shortly….).

Knowing the importance that putting would play in Poker Golf, I set my mind up to do just that.  Except for being a little unlucky and not getting the greatest cards in order to win, I still was able to accomplish my goal of obtaining at least 10 cards in order to give myself a fighting chance…..as well as a fun challenge.