Up For Bid: One Lightly Worn Green Jacket

Sure, The Masters has ended and, like Tiger, you didn’t get fit for a new green jacket on the first Sunday of April. Well, if you, or Tiger, are retaining any hope of adding some green to your wardrobe this year, there’s still a chance. An online sports auction house called American Memorabilia has what it claims is an authentic Augusta National jacket up for auction.

Given that the stiff tails in Augusta only let The Masters winner take his jacket home for one year before racking it in the club closet where all member coats are kept, it’s presumable that either Phil Mickelson traded his recently acquired garment for donuts (see: Tom Bedell’s A Position post, Phil Mickelson With a Glazed (Donut) Look in His Eye), or one Peach-State coat checker is about to retire and take that midnight train far, far away from Georgia.

The auction site makes no claims as to who was the coat’s previous inhabitant, but given that it tapes out at a size 50, which I assume is in US sizing, it certainly didn’t belong to Freddie Couples or little Mikey Weir. It’s possible that maybe Vijay Singh would fill out a 50, although it’s just as likely that the lucky auction winner will be wearing none other than Craig Stadler’s 1982 emerald blazer. 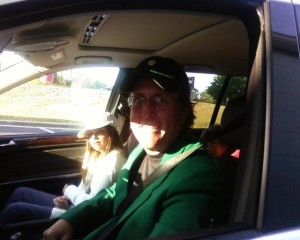 You Want To Trade What for a Dozen?

My bet, however, is that the jacket in question was never the Walrus’s, but rather that it comes from one of the rank and file Augusta National members. While the private club has been awarding the green coats to tournament winners for  61 years, each member has been fitted with one since 1937. If Augusta National has, say 300 members at any one time, it’s safe to say this probably isn’t the first coat to get taken off the hanger and never returned.

Just don’t make the mistake of thinking that winning the auction will somehow get you in among the azaleas. Chances are that if you show up on Magnolia Drive wearing your new purchase, and it really is authentic, it won’t be yours for long.

So, in the end, the coat will cost a lot and you won’t be able to wear it around much. Why not just become a member? Happy bidding, the auction ends September 17th.