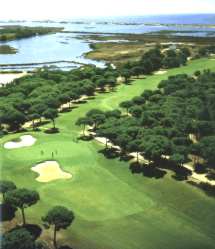 San Lorenzo is one of the jewels of the Algarve.

While on a business trip to Africa a number of years ago, we had a stopover in southern Portugal’s Faro, the major city in the gorgeous Algarve region.  With an open afternoon, I took the opportunity to play San Lorenzo, which at the time was widely regarded as one of Continental Europe’s best courses.  Set in the Quinta do Lago development, the Joseph Lee design winds through rolling tree lined fairways.  It also includes the stunning, demanding and fun sixth hole, a par four dogleg left with a narrow fairway backed by sand dunes, an estuary and the Atlantic Ocean.  Hitting downhill to a small target and biting off as much turf as one dared – – especially in this setting – – is about as good as golf can get.

Best of all, I had most of the course to myself.

Although math is not one of my strong points, I knew that San Lorenzo’s “yardages” were in meters.  And it was pretty easy to calculate that 150 meters was 164 yards.  But on the first four holes, my approach shots kept coming up short.  I was using rented clubs, but my ball striking seemed OK.  Finally, I caught up a couple from the U.K. who politely invited me to play through.  Before moving on, I asked them if I were missing something on my conversation math.

They looked at me as if I were stupid, which is not really an unfamiliar reaction.  The meters, they told me, were measured to the front of the green, which I don’t recall was mentioned on the scorecard, and not the middle that’s customary in many other places.  Dummy.

The rookie error was quickly corrected and though I’ve not been back, I’d accept the chance to play San Lorenzo again in a New York second.  Great course in a fabulous part of the world.  And as is now customary whenever I’m playing somewhere outside the U.S., I casually ask to where are the meter-ages measured.