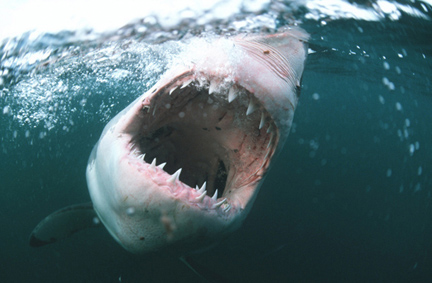 A Guide to Schmoozing Sharks, Meeting Manta Rays, and Traveling with a Porpoise

If bonding with underwater species is your idea of a good time, various commercial and educational opportunities exist worldwide to study, swim beside, dive next to, and possibly even communicate with a variety of large, friendly, dangerous, and/or simply curious sea creatures.  In fact, outfitters may promise to put you in the water with just about everything but the Loch Ness Monster.  And you don’t even have to have a C-card (scuba certification)—just a few C-notes: Many outfitters offer trips for snorkelers and swimmers.

David Fishman, formerly editor-in-chief and publisher of Fathoms: The Magazine of the Underwater World explains how chance encounters have led to a new type of tourism.  “It begins with people who have a passion for the oceans and get excited seeing underwater habitats,” Fishman says.  “They start by cruising a coral reef and seeing a whole other world teeming with life.  From there, they seek out trophy experiences that take their interest to the next level.  Instead of a chance encounter with a dolphin or a turtle sweeping past, they ask: How can I get in the water with a whale shark?

“A whole industry has grown up around offering as much of a guarantee as is possible to encounter underwater animals in a wild environment.  Dive and tour operators provide expert guides who know when, where, how, and at what depth you’re likely to see various animals.”

Bill Acker, owner and CEO of Yap Divers in Micronesia, adds,  “It has never been easier for guests to enjoy safe, responsible animal encounters.  There are excellent resorts and operations all over the world and with airlines improving and expanding, even remote areas are relatively easy to get to.”

But just because a dive shop or tour operator has a slick web page and makes a few promises doesn’t mean that the company will act responsibly to protect both you and the animals it makes its living off of.  Ron Steven, a dive instructor and environmental artist (www.rogest.com) suggests that consumers ask a lot of questions of outfitters. “Most operators offering an interactive experience with any critter in the wild must have accreditation, be permitted, and have a trained crew and an appropriate craft,” he says.  “They should have an operating manual that thoroughly explains what you’re getting into and an outline of what’s going to happen, how they’re going to deal with an emergency or accident or if an encounter gets too close.  Ask an outfitter if it has the right permissions, staff training tools, and procedures for interacting with wildlife.”

Bill Acker adds that “Word of mouth is huge, so if potential visitors know someone who has had a positive experience, that’s one way to tell who is really operating responsibly versus just talking responsibly.  Having been in business in one location for a long time is another fairly good indicator.”  Consumers can also consult dive websites, and seek out operators who’ve received awards from consumer publications and environmental groups.  And oh, yes—watch out for a guy named Gilligan peddling a three-hour tour.

Finally, you may be wondering just how dangerous these outings really are—to humans and to the animals.  Although some of the animals do pose a potential threat, adventure tourism is still tourism— which is to say that in most cases, many people have already safely enjoyed the trip you’re on.  Talking about a particular lemon shark dive he participated in, Ron Steven says, “Any shark in the water is potentially dangerous, but they’re not that interested in humans.  We don’t look like anything they should be eating.  They won’t come up and savage your leg off.  We do more damage to sharks than they’ve ever done to us.”  And from their perspective, if animals really don’t want to spend time in our company, they can swim away—and they’re much better swimmers.

In addition to the thrill of swimming with the fishes, such experiences are important for another reason.  Bill Acker reflects,  “These encounters are magical when done right and people who have experienced these magical moments with under-water animals come away dedicated to preserving the experience for future generations.”

Following are ten examples of sea creatures great and small (and just plain strange) that you might want to meet.

In the Galapagos Islands, divers and snorkelers have the rare possibility of getting in the water with dozens of three-foot green sea turtles with prehistoric eyes and graceful flippers.  What’s attractive about this adventure is that since the turtles have no natural underwater predators they’re not afraid of humans.  You can watch them eating jellyfish or sponges or nibbling algae off stones, oblivious to you.

Next Best Thing to Law School

Off of South Australia, certified lunatics (certified by a dive organization, that is) can spend more time with sharks than Maria did in West Side Story.  Divers wearing dry suits are suspended from the dive boat in metal cages while fish guts are placed in the water like a shark smorgasbord.  ‘It’s right out of a sci-fi movie as these luminous shadows come closer and closer with speed and grace,” says Ron Steven.  “As the powerful, fierce-looking creatures nose and rock your cage you realize how vulnerable and out of your realm you are.”

Each fall off the coast of Bonaire, nearly a dozen species of coral spawn at an exact time that’s synchronized with the phases of the moon.  Divers can get in shallow water and enjoy a pristine night dive while waiting for the appointed moment.  David Fishman describes it thus: “You can see the translucent orange eggs in the coral polyps’ mouths waiting to be released.  Massive brittle stars and other predators come out and move to the top of the coral heads.  There’s an eeriness and sense of anticipation that all the animals are waiting for something special.  When the packets of sperm and eggs start to pop and float to the surface its like an incredible upside down snowstorm of sexual energy.”

Bill “Manta Man” Acker, owner of Manta Ray Hotel and Yap Divers, explains the exhilaration of diving with manta rays in Micronesia.  “There are no words to describe kneeling on the sand when the 82-degree water is crystal clear and 10 or more garage-door-sized stealth bombers glide in so close that you could literally reach up and touch them.  The mantas are cleaned by very colorful small wrasses darting in and out of their mouths and gills, and the surrounding coral is covered with every color and size of tropical fish.”

Jellyfish Lake, in Palau, is one of very few places worldwide where snorkelers can mix it up with five million golden jellyfish.  Eons ago, a geologic upheaval trapped ocean jellyfish in lakes still influenced by the intrusion of seawater through limestone fissures.  The resourceful jellyfish evolved to survive in the lake environment, and in the process lost its powerful stinging capability.  Diving is not allowed in the lake because the water is toxic below a certain depth.

For most folks, seals are those cute creatures that swim inquisitively up to them at the aquarium.  But leopard seals are 9-10 feet long, weigh 800 pounds and sport large, sharp teeth.  Intrepid divers can watch them chase and feed on king and emperor penguins.  “Diving with these powerful, curious, playful creatures has become a real prized expedition for those willing to don a dry suit and get on an expedition to Antarctica,” reports David Fishman.  “Its like going to the bush in Kenya and watching a lion take down a gazelle.”

“This was the single best adventure I ever had,” says Ron Steven, of being in the cold water off Vancouver Island with humpback whales.  “First we could hear but not see the humpbacks and orcas.  Then we got in the water to snorkel when they were cruising around our boat.  They’re very inquisitive.  It’s a goose-bumpy experience; their sheer size and grace and comfort are mind-boggling.  And the acoustics were like a cross between Enya and Space Invaders.”

A Congregation of Cuttlefish

Divers off the southern coast of Australia can watch hundreds of thousands of cuttlefish dating and mating.  David Fishman describes “the haunting style of obvious intelligence of the cuttlefish, which has an ability to mimic other creatures, change color, texture and shape, and watch you with its large eyes.”  Photographers and environmentalists have undertaken a grass roots effort to make the cuttlefish mating a tourist attraction to protect the creatures from fishermen, who are also drawn to the large aggregation of protein.

In the Northern Triangle between the Galapagos Islands, Cocos Islands, and Malpeo in the eastern Pacific, dozens— even hundreds— of hammerhead sharks school during the day, sleeping and socializing with their own kind before feeding at night.  Divers can swim right into the middle of the parade with little risk, as long as they get back to the boat before the evening meal.  Or they may be the evening meal.

Years ago, fisherman off Grand Cayman, in the Caribbean, noticed that when they cleaned their fish, platoons of giant, graceful sting rays would swoop in to snack on what they threw overboard.  Today, snorkelers and divers can both swim with these creatures on the site.  As Ron Steven describes it, “Imagine taking your nephew or Mom for a nice day sailing, arriving on a sandbar, and popping into the water with a snorkel.   Slowly, six-foot rays come in and scoot between your legs and bump and nuzzle you in the water.  You can take great photos and get to see wild marine life up close and personal in a situation that’s not stressful to the ray or the guest.”