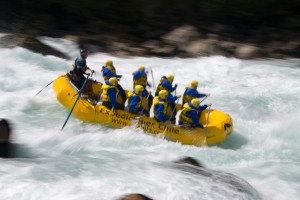 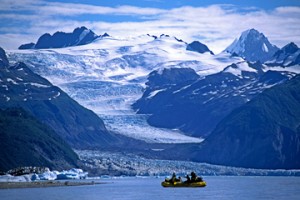 All photos by Leon Werdinger/Ottertrack Productions.

As a former professional whitewater guide I believe there’s no better way to travel than on a river—whether you’re after a white-knuckle adventure or a floating meditation.  If you’re searching for an international escapade that involves more than visiting crumbling churches, and want to combine thrills and culture on your next vacation, a river outing might just be your E-ride ticket.

According to Leon Werdinger, a professional outdoor photographer and long-time river guide, there are several great reasons for floating— and paddling— beyond our borders.         “On some outings, it’s a great way to connect with local cultures and meet villagers or sheepherders,” Werdinger says.  “And river trips allow you to reach locations where you can see exotic wildlife— on Africa’s Zambezi, fore example, you’re definitely going to see hippos and crocodiles— and to access places that you couldn’t reach even trekking or backpacking.  These trips also often feature an international clientele, which makes them even more interesting.” 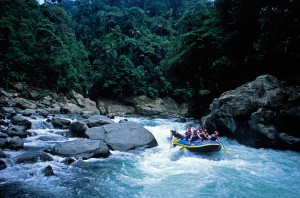 If you’re considering an international river trip but don’t want to end up like Meryl Streep in the movie The River Wild, make sure to do your homework up front.  For many folks, choosing the right river can be more difficult than paddling through foaming whitewater. There are a number of factors to consider that might affect your safety as well as your enjoyment.

Rivers are a lot like people— formed by their surroundings and exhibiting personalities that run the gamut from frolicky to ferocious.  Rapids— the behavior manifested by these personalities— are rated according to their potential for upset and injury on a scale of Class I to Class VI.  A Class I rapid resembles, say, the water in a swimming pool when George Foreman wades in; a Class VI looks more like a frothing smoothie in a blender, and is essentially unnavigable.  Most active folks with an adventurous spirit will be comfortable on Class III and even Class IV whitewater.  Only real adrenaline addicts— and probably only those with previous river experience— should sign up for Class V whitewater.

Because these trips involve far more variables than a stroll through an art museum, be careful in choosing who takes you to— and on— the river.  Martha Gaughen, Vice President of Sterling Brownell, an upscale leisure travel agency specializing in soft adventure, offers this advice.  “It’s critical that you pick the right outfitter, and the more challenging the river, the more critical.  Perform your due diligence: find out what sort of equipment the outfitter uses.  Who are their guides?  What’s their experience level?  How long have they been in business?  What safety measures are in place?  Are helmets and life jackets required?  What’s their medical backup?  A lot of these trips are to very remote places, so every expedition needs to have a plan and a person on the trip who’s wilderness certified. Ask a lot of questions and get feedback from actual clients.”

Finally, the very styles of these trips, and the level of service offered, can vary widely.  On some expeditions you can practically get a pedicure while your guides are busy whipping up a seven-course dinner.  Other outings are more participatory.  As Lonnie Hutson, owner of Sundog Expeditions in Deary, Idaho explains, “I find people have a better time on our trips if they really contribute.  People like to get involved, whether that means helping with gear or chopping vegetables in the kitchen.  Passengers and guides really bond when they work side by side.”

From Canada to China to Costa Rica, here are ten international river trip choices that shouldn’t land you in hot water. 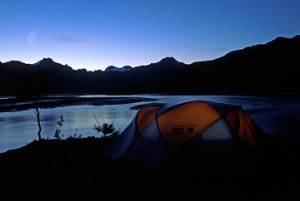 The fact that just reaching the Karnali requires an overland trek with porters should give some idea of how remote this big-volume Class IV-V waterway is.  The week-long trip flows through a series of narrow, forested canyons and ends in Bardia National Park.  Most of the gnarly whitewater occurs in the first few days.

The day-long section at the top of Africa’s Zambezi river offers what photographer/guide Leon Werdinger calls “gnar gnar whitewater, with five gnars.  If your raft flips you’re instructed to stay in the main current, because the eddies along the sides have crocs and hippos— and they do flip rafts there.”  The overnight stretch farther downriver is mellower, and floats through rural villages.

Martha Gaughen calls the Pacuare’s whitewater “fun but never threatening.  You can take 1, 2, or 3-day trips and combine them with other eco-tours to volcanoes or in the rainforest canopy.”  Highlights include the chance to see toucans and sloths and swim beneath waterfalls. 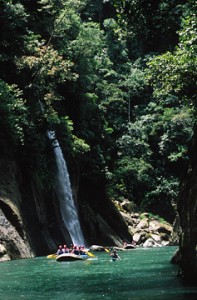 Eric Hertz, President of Earth River Expeditions, describes the Yangtze as one of the most culturally interesting river trips in the world.  “The scenery is pretty— high, rolling, green hills— but the untouched Tibetan culture is unbelievable.  We see monks in red robes in stone villages cut out of cliff walls, amazing temples with paintings, and the people are really welcoming and thrilled to see us.  This is one of the all time great river trips.”

An unusual island river trip, this one-day outing on the Upper Navua cuts through a gorge of black lava overgrown with ferns, vines, and other jungle flora.  The easy Class II whitewater is perfect for family outings.  Riverside waterfalls await around nearly every bend.

New Zealand’s fun, technical Shotover River is most often run as a day trip from Queensland in the company of Kiwi guides with ‘no-worries’ attitudes.  Highlights include a rapid that flows through a tunnel and then pours right into a Class IV drop back out in daylight.  Leon Werdinger rates the shuttle drive to the Shotover, on an eroding hillside, as “a Class V—it’s the scariest road I’ve ever been on.” 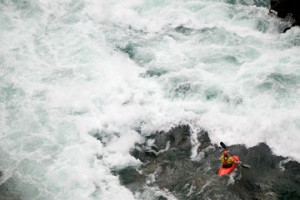 Describing the hard-core whitewater of the Futeleufu, Martha Gaughen quotes a client who told her, “If you swallowed a piece of coal before this trip it would come out as a diamond.”  The intense, challenging Class V river is often run as a day-trip in combination with such other adventure sports as rappelling and zip lines.  The river cuts through a beautiful mountain valley.

Eric Hertz calls the Magpie the second best multi-day whitewater river trip in North America— and that’s saying something.  Guests are flown in by float-plane for a week of warm-water boating in a pristine area that “looks like Siberia.”  The Magpie has been run so seldom that the rapids don’t even have names.  One highlight is camping across from a 100-ft waterfall with a powerful volume of water.

Ten- to twelve-day trips on the Tombopata carry travelers from the Andes to the Amazon along a river boiling with Class III-Class IV rapids.  It passes through two national parks.  Some expeditions are joined by a naturalist who points out such wildlife as monkeys, tapirs, macaws, and even jaguars.  Guests stay at lodges and camp out en route. 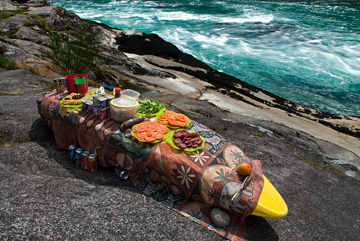 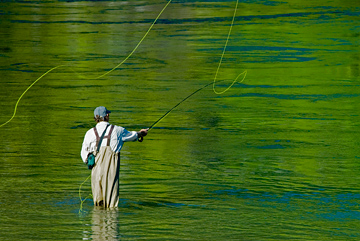