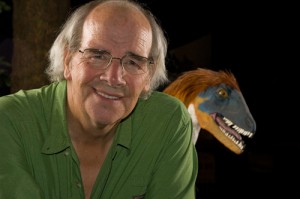 After hunting dinosaur bones all morning with paleontologist Jack Horner and his wife Celeste in the badlands of eastern Montana— tramping through slick gullies and across crumbling plains silly with prickly pear cactus, sagebrush, and rattlesnakes– we stopped for lunch and a geology lesson atop a high escarpment.  As I dug into my sandwich, Horner pulled a rib out of his battered green army pack and commenced gnawing.

Although this particular rib did not originate in the Cretaceous period (it was from last night’s barbecue), Horner considered it thoughtfully between bites.  “Ee-yup,” he said– an indication that he was thinking deeply.  “Yup yup yup,” he added, as if to clarify.  It turned out that he was thinking about why the Hell Creek Formation stretching before us seemed to contain more dinosaur bones than a strip bar contains drunks.

“This was a lowland area of river flooding where sediments covered things,“ Horner said, picking clean the rib bone.  “They stayed covered for 65 million years– long enough that they haven’t eroded.  But erosion had to begin so that the right level is weathering out right now.”  Lucky for Horner he grew up in the right place at the right time.  Eastern Montana has proven to be a mother lode for uncovering dinosaur bones, especially those of T-Rex.  Finding them—as I learned from watching him and Celeste in the field– often involves walking slowly through the badlands, traversing steep ridges, and looking down at the ground as if you’re inconsolably sad. 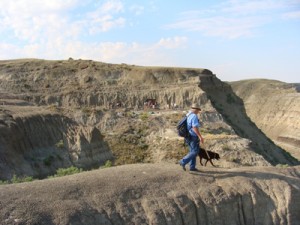 A veritable dino divining rod, Jack Horner has uncovered more dinosaur fossils than anyone else in history. The uniqueness of his finds (a bone bed containing more than 10,000 duckbill dinosaurs; the world’s first dinosaur embryos, e.g.) and the theories he’s drawn from them have led us to begin looking at dinos as more than just big, clumsy, often-violent creatures who were too dumb or too unlucky to survive.  It is astounding what Horner has deduced from dinosaur bones—that they were social animals that traveled in herds; that they raised their own young; that T-Rex was a scavenger, not the fearsome predator it’s been miscast as in popular culture.  Horner has also contradicted accepted theory by hypothesizing that dinos were warm-blooded and could shift their metabolic rates as they grew older, which may account for their tremendous size.

I traveled to this godforsaken locale not far from where the radical Freemen cult made their stand years ago to spend a couple of days with this Master, who each summer welcomes 30-50 dedicated volunteers to help with his research.  Why would you go?  Because dinosaurs are cool, huge, and gone, and working a dig combines the adventure of a camping trip with the chance to play detective in a case that’s gone unsolved for millions of years.

But volunteers must prove themselves self-motivated, fast learning, and physically fit—and that’s just to reach the site, which in this case is a long and lonely drive even from the remote city of Billings.  In addition to my hunting dinos with Horner and Celeste, I also helped a handful of other volunteers and staffers excavate one of the project’s more recent finds– a 40-foot Tyrannosaurus Rex. 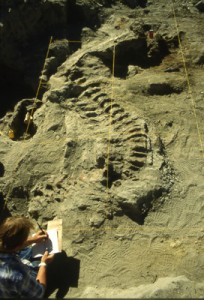 In a field where academic credentials are like a secret handshake, Jack Horner can offer only the high-five of a high school diploma.  Yet even without the degrees he’s a Regent’s Professor of biology at Montana State University; Curator of Paleontology at Bozeman’s Museum of the Rockies; author of many books including “Digging Dinosaurs” and “Dinosaurs Under the Big Sky”; and recipient of the prestigious MacArthur “genius” grant.  He’s also consulted on the three Jurassic Park movies (and admits to rooting for the dinosaurs).  Not bad for a guy who describes himself as “a glorified ditch digger, squatter, and beggar.”  Physically, his beard and sunglasses make him look both scholarly and dangerous.  One of his colleagues calls Horner “the Hank Williams Jr. of paleontology”– and not just because of the resemblance.  In his earlier years, Horner earned a reputation as camp wildman.  But these days, Horner’s young staff and visiting volunteers ratchet up the beer drinking and dissonant country singing when Horner’s not in camp.

On the day I spent with him in the field, Jack kicked off our afternoon adventure by exclaiming– like one of the Hardy Boys– “Let’s go explorin’!”

Not knowing exactly what to look for at first, every rock, stone, pebble, and twig appeared to be a dinosaur to me.  When I picked up what I thought was a gorgeous fossil, Horner identified it immediately.

In the course of the day, I learned to discern between bones and stones after Horner pointed out that any “rock” above a certain size had to be a bone because there were no big rocks here, and that bones have texture—marrow space—whereas rocks don’t.  Each time I presented a genuine specimen, Horner quickly nailed it– a champosaur rib; a prehistoric turtle shell; a bone fragment from a modern buffalo.

But we were looking for more than scattered fragments.  “I’m not interested in single bones,” Horner said.    “I want to find more than one bone weathering out in the same place.”  That afternoon, dragging packs full of water, snacks, picks, brushes, shovels, a portable GPS system, and other gear that volunteers will grow familiar with,  we (Jack, that is) stumbled upon three new dinosaur skeletons—“associations of bones,”– although he appeared to be simply wandering absent minded through the topography.  But I knew that he was thinking about what the climate was like here millions of years ago, asking himself how bones might have come to rest in a particular place or position, at a specific angle.  Had water moved them here?  Had they been scavenged?  He pursued his forensic detective work silently as he picked at the dirt around them.  Volunteers—who mostly work the sites that Horner now devotes most of his time to finding– have even more time to decode stories as they spend hours communing with bones.

I tried to walk out in front of Horner for awhile so I’d be likely to spot a juicy find first.  But where a hillside looked like a hillside to me, Horner spied a black rock poking out ten feet up the slope.  When he finished examining it he said, “Yup.  I’m beginning to think Tyrannosaurs are a dime a dozen.”  Soon after, he also spotted three ribs from a triceratops lying on the ground imitating rubble and stones.  Horner asked me to name the site, which I called “Triceratropolis.”

The next day I experienced what occurs after Horner finds a worthwhile specimen– by spending eight hours on my knees with one of his crews of about eight people essentially chipping away ground like hard-frozen chocolate ice cream using a chisel, awl, and paint brush, and being extremely careful not to hit any part of the Tyrannosaurus that lay buried in the hill.  Which is what most volunteers will find themselves doing most of the time.  The field crew chief on this excavation also taught me to mix plaster and water into a gooey paste to apply protective casts around bones for when they’re carried out to a museum for further study– and possible reassembly into a threatening museum dinosaur.  Horner’s more permanent workers—grad students, mostly—demonstrate a technique once and hope you’ll catch on.  Horner currently trains all his crew chiefs who then train inexperienced volunteers such as myself.

When I asked Horner how he’s managed to find so many more dinosaurs than anyone else (he’s uncovered fully one third of all the Tyrannosaurs ever discovered), several geologic epochs seemed to pass before he responded.  “Maybe nobody went looking, or they didn’t know what they were seeing,” he said.  “Dinosaurs might be everywhere.  There could be T. Rexes all over the place.  I don’t want to predict.  I just go out and find stuff.” 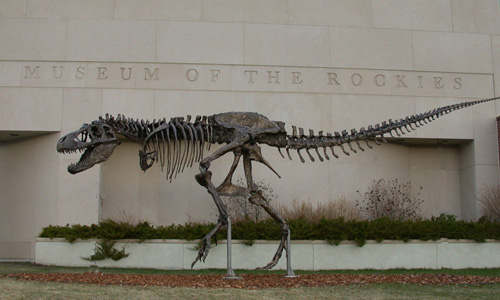