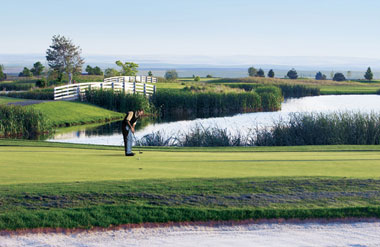 In the high desert east of Oregon’s Cascade Mountains,  ride on toward the Native American owned Wildhorse Resort and Casino, located just outside Pendleton.  Wildhorse isn’t a gamble at all: lousy poker players will actually make money by paying the low greens fees on the golf course rather than betting their two pair against three-of-a-kind in the poker room.  The underrated and largely unknown track stretches to 7,112 at the base of the Blue Mountains.  Designed by local architect John Steidel, the holes wind across high plains amid native grasses beside 1,400 planted trees including Ponderosa Pine, Mountain Mahogany, and Western Larch.  On the horizon, view the Columbia Plateau.  But also keep your eye on the greens, which slant and slope rather than undulating.  The first good hole comes at number two, where two bunkers lurk in a hollow, OB lies to the left, and the fairway curves uphill.  The visuals here are tricky, making distances hard to figure.  Other standouts include number fifteen, where a high mound hides the green and water waits patiently to the left.  Along the course you’ll spot the Tamastslikt Cultural Institute, a Native American community center and museum well worth a visit following your round. 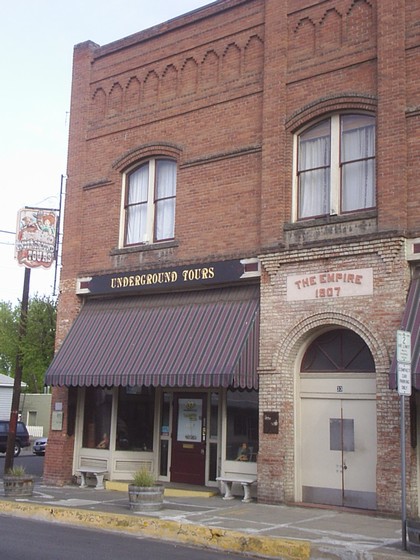 Also worth visiting is the nearby high desert western town of Pendleton.  A century ago the sleepy burg boasted 32 saloons and 18 houses of ill repute.  Today, it’s most famous for the Round Up, a rodeo that’s taken place every September since 1910.  If you miss the roping events, you can still visit the Hall of Fame Museum located under the grandstand. Downtown, pick up the Pendleton Underground Tour (541-276-0730), which proceeds through tunnels and subterranean rooms that once housed the Shamrock Card Room, a meat market, and a Chinese laundry.  The rooms have been made to look as they did when in use, down to the smallest detail. Spend all your extra gold dust at the Pendleton Woolen Mills factory store (541-276-6911).