Not that you would ever watch golf on television, but if you did you’d likely see Tour players executing the occasional shot that might cause you to reflect: ‘I’d be as likely to grow antlers as make a shot like that.’  And I’m not just talking about 300-yard drives or high, perfect five-iron shots that plunge to the green and jump into the hole.  I’m talking about shots that seem to defy physics and appear as if they’ve been created by the special effects department.

Here’s an ironic fact: the players who can successfully pull off these shots are also the least likely to need them.  Sure, I can bury an approach in the sand, trickle my tee shot into a shallow creek, or spray a long iron into dense shrubbery.  But once I get there, I’m the guy who might slash at the ball three times before using the Johnny United wedge– which is to say throwing my ball back onto the grass.  That’s why I’ve consulted some of the West’s best golf instructors, who offer the following advice on how to hit a few of these seemingly impossible shots.

The only thing worse than having your mile-high wedge shot fall two feet short of the green and plug in a bunker (the well-known “fried egg” lie) may be to have it sail over the green and plug in the back bunker—on a downslope.  For a good visual of a golfer hitting an impossible bunker shot, consider Ernie Els’s nearly mystical escape from a bunker beside the 13th green in the final round of the 2002 British Open at Muirfield.

For guidance on how to hit a plugged, downhill bunker shot I turned to Tim Mahoney, Director of Education for Troon Golf and an instructor at Talking Stick Golf Club in Scottsdale, Arizona.  Mahoney, who is a GOLF Magazine Top 100 Teacher, offers some general advice before getting to the specifics.

“First and foremost, never hit two shots in a row from a bad lie,” he advises.  “Get back to the grass.

“Second, never attempt a miracle shot after you’ve hit a bad shot.  Take your medicine and get back in the game.

“To hit this shot you need to understand how a sand wedge works.  It’s built like a shovel, and is the only club that has bounce.  The worse a lie is the more sand you want to take with your shot.  Here, to take a lot of sand, tilt the club up by closing the face at address or leaning the shaft forward, toward your target.

“Then position your body to swing along the slope by setting your shoulders parallel to the slope.  On a downhill lie, lean left and put more weight on your lower foot.

“Finally, trust your shot.  The golf ball will fly in the direction of the slope.  And remember that there’s no rule that says you have to fire at the flag.  You can always go sideways or backward.”

Mahoney adds that this is really an easy shot—but that’s why he’s Troon Golf’s Director of Education and I’m the one who buried it downhill in the bunker to begin with. 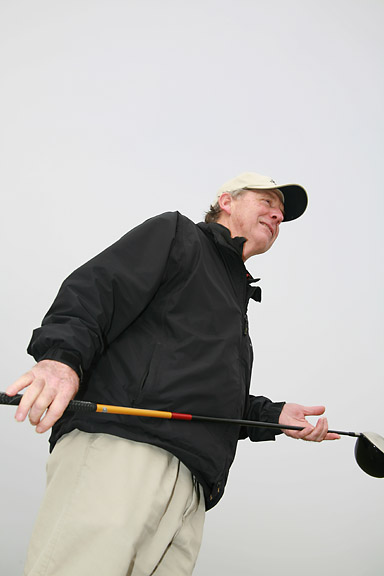 Golf was invented by the Scots, who happen to live in a landscape full of such unfriendly flora as heather and gorse.  Now that golf has spread across the globe, endless varieties of malevolent vegetation have created some of the most difficult golf shots imaginable.  Take, for example, ice plant, which looks lovely in a ceramic pot in my yard but acts as fierce as a jackal on a fresh kill when it gets ahold of a golf ball.

Possibly the most famous golf shot ever hit out of ice plant occurred at the AT&T Pebble Beach National Pro Am some years ago.  Jack Lemon executed the shot on the 16th at Cypress Point, from the edge of a cliff above the ocean, with the help of Peter Jacobsen, Clint Eastwood, and Greg Norman, who formed a human chain the end of which held on to Lemon’s belt as he somehow managed to hack the ball back to grass without falling into the Pacific.

Grant Rogers, a PGA Master Professional and golf instructor at Bandon Dunes Resort on the Oregon Coast, has found himself in a bit of ice plant over the years.  In fact, he admits to playing a shot similar to Lemon’s on the same hole at Cypress.  His most vivid memory is of walking toward his ball and hearing his caddie scream a warning: sometimes there’s no ground beneath ice plant.

Rogers describes the shot as “pretty classic.  It’s right up there with hitting out of gorse.  If you don’t hit it perfectly the ball goes straight down.  That’s part of the fun.  It’s a deadly shot.

As for actually hitting it, Rogers says, “Take a lot out of there with a really big swing—hit the ice plant and the ball and everything around it.  Use a big-faced club with lots of loft.  If you’re actually serious about hitting out of ice plant you have to THINK it’s going to come out.  Otherwise you could take endless swings and the ball will get tangled and harder and harder to move.

“If you look up and the ball’s not in view, try looking straight back down.”

Rogers had so much fun talking about hitting golf shots out of ice plant that I decided to offer him one of our other challenges as well: hitting out of water.  At the 1999 British Open at Carnoustie, Jean Van de Velde needed a double bogey on the last hole to win the tournament.  After flailing on several shots he found his ball lying half drowned in the Barry Burn (creek) fifty yards from the green.  Van de Velde removed his shoes and socks, rolled up his pants legs, and waded into the stream.  As he prepared to hit the shot, a photographer upstream of his ball also stepped into the water, accidentally diverting the current enough to immerse Van de Velde’s ball all the way, thus robbing viewers of the chance to watch a professional golfer execute what may be golf’s toughest escape.  Van de Velde made a seven on the hole and lost in a playoff.

Grant Rogers recommends only attempting this Houdini-esq maneuver if some part of the ball is visible above the surface of the water.

“It’s pretty gutsy to even think about hitting this shot” Rogers muses.  “It’s almost like an ice plant shot or a sand shot.  It may cause chaos with your golf stance, but maintain your balance and get as ready as you can under the circumstances.

“Open the club face to give it more loft.  A little swing won’t work.  You need to take your most lofted club, take a full swing, and hit everything– feel like you’re going to hit the water behind the ball and move the water out of the lake or stream.

“Break your wrists really early in your backswing to get the club more upright and to give you a chance to blast down and really move the ball out of there.”