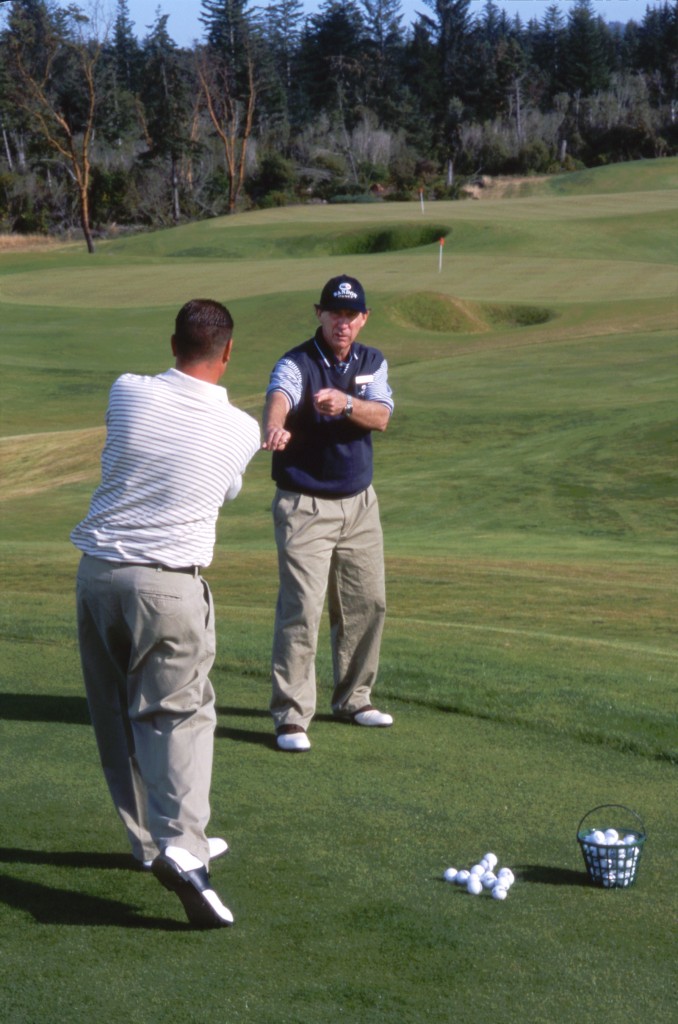 The master engaging his adversary. Photo by Wood Sabold.

A cold, hard sideways rain  rattles the windows at Bandon Dunes  as Grant Rogers, the resort’s director of instruction, looks outside. He  doesn’t appear all that happy about playing in this weather—it isn’t nearly bad enough to suit him.

“I like when you have to bring your North Face gear to play,” Rogers observes, scanning the windswept links. “There are other extreme sports. Why can’t there be extreme golf? There’s no bad weather for golf; there’s just weather. People should experiment with it because some people who think they won’t like it will like it a lot. Anything can happen, and that’s the fun of it. ”

In his several decades of teaching golf along the Oregon Coast—first at Salishan Spa & Golf Resort just outside Lincoln City, Ore., and now at Bandon a couple hours to the south—Rogers has earned a reputation for three things: 1) his love of playing in forbidding conditions; 2) his wild, adventurous stories; and 3) his singular instructional style. Do not expect a traditional lesson from Rogers—unless you’ve been educated in an Eastern tradition. The recipient of both the 2006 PGA Pacific Northwest Teacher of the Year Award and the 2005 PGA Oregon Teacher of the Year Award, Rogers is often referred to as a guru. In my own experience, he is the only person who’s ever given me a golf lesson that I didn’t know I’d gotten until several days later.

I first crossed paths with Rogers nearly 15 years ago when I was writing a book on alternative golf instructors and was referred to him by one of his students, who called him the “Zen master.” I contacted Rogers asking to set up a Zen golf lesson so I could profile him in the book. He responded evasively and said I should just come down and see him.

Having just moved to the Northwest from Manhattan, I was blunt with the ponderous Oregon golf pro; I told him I didn’t have the time to visit if he couldn’t provide the kind of material I needed. It took a couple years for me to understand what Rogers had been trying to tell me in his soft-spoken way: If you call something a Zen lesson—whatever that could possibly mean— and establish certain expectations, you’ve essentially ruined the very possibility of getting such a lesson.

At Bandon, despite the rain—or perhaps because of it—Rogers and I head out to see what kind of adventures might befall us. Between shots, huddled in our Gore-Tex, he starts telling stories.

Such as the one about playing at St Andrews. At night. With only a putter. And being one over par after 11 holes. And the one about playing through a thunderstorm at England’s Royal St Georges, where the lightning was hitting the ground so close he could smell it. He tells me about the time he fell asleep on a surfboard in Hawaii and only awoke when he caught a huge wave by accident. Another story begins, “One time my wife was going to the Amazon jungle with our daughter, who was 2 . . .” Rogers offers up stories about barking dogs and blind golfers, bunkers so deep you couldn’t throw a ball out of them, and a pro who disappeared into the Alaskan wilderness after hitting a ball washer on his drive during a major tournament.

As we walk the most sublime links golf course in North America, Rogers also touches on his golf philosophy, if aphoristically. We stand on a green overlooking the ocean, and I notice there is standing water—in my golf bag.

“Somebody in every foursome is going to have the most fun,” he muses. “It might as well be you. I tell students, ‘Don’t wait until you’re good to have fun.’” Rogers explains that he really likes skiing because when someone tells you they had a good time skiing, that’s the end of the conversation. They never go on to tell you about every turn they made on every run. “It’s like putting,” Rogers adds. “A putt either goes in or it doesn’t. It’s no big deal. There’s really nothing to think about.”

The following day, as I motored back to Portland along I-5 in more pounding rain, I thought further about our round together. I’d played well, but Rogers had seemed to struggle, especially for one of only 200 or so PGA master professionals in the entire United States. In particular, I was surprised that Rogers’s drives had never seemed to land very far past mine, even when I caught one thin or pulled it into the fescue.

When I mentioned this later to a friend, he recalled a story Rogers had once told him about giving some guy a playing lesson and hitting the ball wherever his student did, because that way they could walk together, which made it easier to talk.

Here are a few excerpts from my conversation with Grant . . . 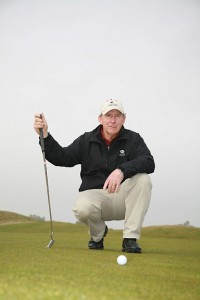 “Every time I play Pacific Dunes I can’t believe how amazing it really is.

It is part Links and part magic.  The magic is the walk and everything you discover between your shots.  Anytime is the best time to play Pacific Dunes, but when you can play it in the wind and rain it is extraordinary and a match for any other great course in the world.”

“It’s a good thing we’re talking today because two days ago I wouldn’t have had a story. Yesterday I was playing a match and my partner hit his drive way right into the gorse.  He actually found it and hit it right again, off the golf course.  The rest of us walked up to the hole.  We didn’t see my partner but he fired an iron from out of nowhere and launched a line drive that hit me right in the jaw  I almost dropped, but I didn’t want to give our opponents the satisfaction.  The ball bounced off my jaw to about 45 feet and he made the par.  I’ve been hit before, too.  Several times people hit shots right at my head and I caught them.  I asked a guy I was giving a lesson to if he knew where his ball went and I said I caught it, and then I showed it to him.”

Anything unexpected in your golf bag?

“I sometimes carry two putters.  I like to putt from long distances, from 150 yards in, and don’t want to wreck my Scotty Cameron putter so I carry another putter that’s sturdier.  Sometimes I tee off with it.  People identify certain clubs with certain shots.  I like to destroy that mental image.  You can use any club from any place on the golf course and still play well.”

“Lorena Ochoa.  It’s amazing that she weighs 118 pounds and is one of the longest drivers on Tour.  She’s a good model.  Not the type of person who can rip a phone book in half but she’s got a good two-speed swing and really accelerates through the ball.  She’s not afraid to take it back really easy and then— BOOM—let it go.”

Why are so many golf professionals such robots?

“They think they have to be to play well.  I disagree.  I had a student tell me the other day that he can’t focus for four-and-a-half hours.  Why would you?  A lot of these guys focus for that long whether they need to or not.  I love guys like Trevino who goofed around a lot and then was deadly serious for the 2-3 seconds when he was ready to hit the ball.”

“It’s the one you think is the hardest. It’s all about the mental game—you have to think there’s a way to hit the shot.  It’s not the shot that’s hard, its how we view it.”

“In the future, backswings will vanish like the dinosaurs did.  The golf swing will start from the top and travel to the finish position.  All it’ll take is one tour pro to be successful with this.  It’s a simpler way to swing.

“I tell students about a big-wave surfing competition I saw in Hawaii.  This Australian guy won and after they gave him the check someone asked him who the best surfer in the world was, and he said ‘The one who’s having the most fun.’  Somebody in every foursome is going to have the most fun.  It might as well be you.  I tell students not to wait until they’re good to have fun.  Celebrate every good shot.  You don’t know when you might hit another.

“Be serious about improving but don’t take it too seriously.  Enjoy the journey.  It’s like in martial arts when students are in a big rush to change colors, to earn a darker belt.  You should enjoy being a white belt.  The inventor of Aikido, who earned ten black belts, asked to be buried in his white belt.  If you keep playing golf your color will change.”

“The first person who ever hired me as a teaching pro told me one thing: just don’t make anyone worse.  That’s a constant mantra for me—help people get better and don’t overwhelm them with things they can’t do.”

“To be 150 years old, a shadowy figure walking the links, who people point to and say: ‘Don’t play that guy for money.’”