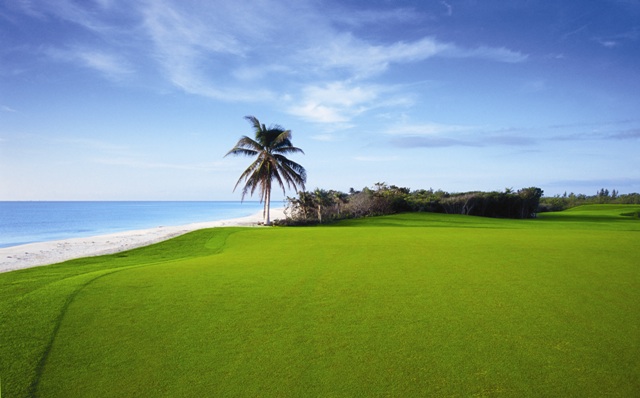 You already know you're going to hit this palm tree at El Camaleon Golf Club.

The ancient Mayan culture invented one of the earliest forms of ball games, so it’s only fitting that golf thrives among the stone pyramids, jungles, and gorgeous shorelines of their homeland.  Visiting golfers will be glad to note, however, that unlike in early Mayan times, the winners of modern contests will not be sacrificed to the gods.

The state of Quintana Roo, on the eastern edge of Mexico’s Yucatan peninsula, makes for a perfect happy/sunny destination combining golf, archaeological tours, fine resorts, water sports, shopping, fiery cuisine, and hip towns such as the charming, beachy Playa del Carmen.  While some visitors will prefer the action of Cancun, the Riviera Maya to the south, provides a slower-paced (and quieter) alternative to high-rise hotels and crowded bars. 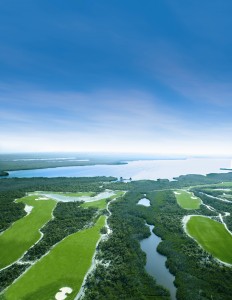 Just north of Cancun lies Playa Mujeres Golf Club.  Although the name translates to “Women’s Beach,” men are equally welcome to hit into the bunkers of this new Greg Norman design that stretches 7,218 yards along lagoons and beside the gleaming Caribbean.  If you visit Playa Mujeres for the area’s watery attractions, ten holes on the golf course provide an opportunity for splashing. 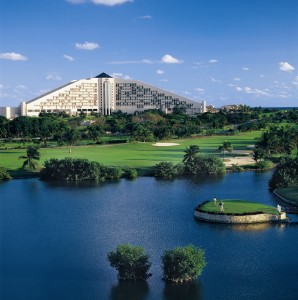 The Hilton and Cancun Golf Club. The island tee is not available for overnight stays.

Smack in the middle of Cancun’s Hotel Zone, on the sandy spit threading between Nichupte Lagoon and the Caribbean, lie two more courses worth playing for their convenience.  Robert Trent Jones, Jr.’s Cancun Golf Club at Pok-ta-Pok proffers an older layout routed through lush vegetation, beside Mayan ruins, and offering watery views in all directions.  The 6,750 yard course may seem as tired as some of the partyers you’ll notice slumped over their morning coffee in local cafes, but Pok-ta-Pok still provides a fun, easygoing warm-up for some of the more challenging courses to the south.  Close by, the Hilton Cancun Golf Club is Cancun’s only resort with an on-site course.  Designed by Pedro Guereca, this windy venue has recently undergone a huge renovation and promises some good, clean fun for less serious players. 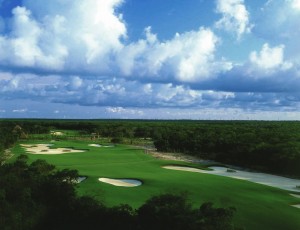 Heading south from Cancun, the Moon Spa and Golf Club is associated with the humongous all-inclusive Moon Palace Resort.  Equally gigantic is the quality of 27 holes of Jack Nicklaus signature golf—some of the strongest golf in the Yucatan.  The Dunes, Lakes, and Jungle nines can play in eighteen-hole combos to as long as 7,200 yards.  Highlights include number eight on the Lakes Course, a 133-yarder to an island green— or green island, if you prefer.  Number three on the Dunes course may be the best on property; this 229-yard par three routes over a lake lined with limestone slabs to a green protected by perfect pot bunkers.  In keeping with the all-inclusive theme of the resort, all food and beverage is included in green fees. 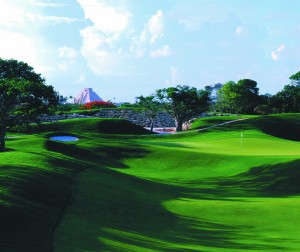 For a more architected—some might even say over-designed—course, try Iberostar Resort’s Playa Paraiso Golf Club, a crisply run facility centered around a wildly dramatic layout designed by P.B. Dye.  The holes boast beautifully carved features and swooping mounds, deep bunkers, large elevation changes, and non-traditional hazards such as rocky river beds.  Unique hand-laid stonework appears on several holes, a subtle tribute to the Mayans.  The 6,800-yard track exudes an upscale, resorty feel.  Number three presents a short risk/reward par four of 312 yards full of such eye candy as curvy swales, splashes of pot bunkers, trees, and a fairway that winds canyonlike between high grassy mounds.  Three lakes decorate Playa Paraiso, which will seem even more like paradise if you can hit high shots to the greens. 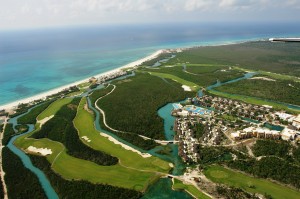 An aerial view at Mayakoba may help you plan your approaches. Or not.

In 2007, Mayakoba Resort’s Greg Norman-designed El Camaleon golf course hosted the first-ever PGA Tour event in Mexico.  This invitingly user-friendly venue plays to 7,200 yards.  Much like it’s namesake—the chameleon— the golf course changes personality as it transitions between three landscapes: jungle, thick mangroves, and oceanside dunes.  Many holes run alongside limestone canals filled with blue water.  Two holes—both par threes—play to the edge of the Caribbean.  While Norman did not create tremendous golfing excitement here, El Camaleon is an immaculately maintained and forgiving layout, with aesthetically pleasing greenside bunkering and wide, welcoming fairways.  The associated Fairmont Mayakoba Hotel is possibly the best place in the area to lay your head between golf rounds. 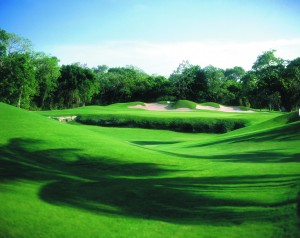 The swoopy, shadowy 13th at Playacar.

The southernmost of Riviera Maya’s golf venues, Playacar Spa and Golf Club offers one of the toughest courses around—and is also in the toughest shape.  Narrow fairways, small greens, and a prodigious slope rating of 148 combine to make this a stiff test in spite of the free food and drink included with green fees.  Robert von Hagge’s design feels a bit like Myrtle Beach at times—except for the thick jungle, archaeological vestiges, and iguanas the size of collies.  At other moments the holes conjure nostalgia for Spain, Florida, California, and even a middle-eastern oasis.  The front nine plays 450 yards longer than the back.  Number thirteen is one of the most aesthetically pleasing, a short par four with a dry, grassed depression full of lounging lizards fronting the tiny, elevated green.

Though some may consider this crazy talk, there’s actually more to do in most foreign countries—including Mexico—than play golf.  Those attracted to the confluence of sand and water known as “beaches” will find an entire coast waiting to be discovered in Cancun and south along the Riviera Maya.  Although many beaches are accessible only through resorts, explorations down some enticing dirt roads can turn up the perfect stretch of coastline, a few palms, and a simple palapa bar serving grilled fish and buckets of cold beer.  Kayaking, scuba diving, snorkeling, fishing, and other sports are available in many locations along the extensive coral reef just offshore.  Visitors can also immerse themselves in a number of cenotes—naturally occurring sunken freshwater pools that punctuate much of the Yucatan Peninsula.

Those looking for more bustle than isolated resorts offer but less spring break attitude should check out Playa del Carmen a charming small town full of restaurants, cafes, bars, galleries, and shops mostly gathered along one cobbled pedestrian street two blocks from the beach.  You can buy everything from tee shirts to tequila, handcrafted artwork to huaraches.  Small, intimate boutique hotels line the side streets and offer secret retreats with shady courtyards, private pools, and terraces proffering ocean views.

No trip to the Yucatan is complete without an excursion to connect with ancient spirits—no not the golf Gods, but the Mayans who erected stone cities in the jungle and created one of history’s most sophisticated calendars.  A bit further down the coast lies Tulum, the only Mayan site ever erected beside the ocean.  This walled cliff-top city was constructed in the sixth century and some buildings still display remnants of brightly colored paintings inside.  Try visiting early in the morning or at dusk, when the crowds have dispersed and the mood is subdued and reverential.  A small village near the ruins—with hotels and other services— makes a nice base of operations for those looking to escape the invading hordes.

About two hours inland from the Riviera Maya stands one of the grandest examples of ancient Mayan architecture anywhere in the region. Chichen Itza, a stone city from the eighth century, creates a mood of mystery, power, and puzzlement.  The site was abandoned in the ninth century then resettled by the Toltecs, only to be abandoned again.  Upwards of 100,000 people lived in thatched palapas over 25 square kilometers surrounding the palaces and temples here.  At the Castle of Kukulcan, built according to principles of the Mayan calendar, sunlight creates the image of a serpent moving up and down the exterior steps of the stone pyramid on the days of the equinoxes.  The site is also home to one of the largest ball courts ever built, with warlike symbols and perfect acoustics.  No ancient driving ranges have been discovered thus far.

Lorenzillos (52 998 883 1254, www.lorenzillos.com.mex).  For lobster, shrimp, soft shell crab, and other seafood in a party/pirate atmosphere, this busy eatery overlooking the lagoon in Cancun delivers.

Yaxche (52 984 873 3712, www.mayacuisine.com), just off the main drag in Playa del Carmen, serves up original Mayan and Yucatan cuisine in a building that replicates an ancient temple.  Ask for a table in the garden, where frescoes, carvings, stone pillars, and waterfalls create the perfect atmosphere.  The flank steak with hot peppers is outstanding—though fish, seafood, and vegetarian dishes spiced with chiles, coconut, and other fresh ingredients also excel.  Winner of the National Restaurant award.

Hotel El Rey del Caribe (52 984 884 2028, www.reycaribe.com.)  All 25 rooms of this eco-conscious colonial-style hotel in Cancun open upon a lush courtyard with pool and Jacuzzi.  The hotel is proud to use solar power, and has extensive recycling, composting, and rainwater catchment systems in place.

Fairmont Mayakoba (52 984 206 3000, www.fairmont.com.)  The first of five luxury hotels to be built at this resort along the Riviera Maya, many of the Fairmont’s 401 rooms are located in two-story casitas overlooking the golf course and a series of water-filled canals.  Guests can reach their rooms, five restaurants, pools, the golf course, beach, and other amenities on small boats, bikes, on foot, or by golf cart.  The environmentally responsible resort also boasts the deluxe Willow Stream Spa.  Try the Food of the Gods massage, which includes a delicious chocolate body scrub with zero calories.

Playacar Palace (52 984 873 4960, www.palaceresorts.com.)  Located within walking distance of Playa del Carmen, this all-inclusive resort will change your mind about all-inclusives with its sleek, upscale look, hip vibe, and cool places to hang out.  208 rooms all sport double Jacuzzis and most overlook the beach and Caribbean beyond.