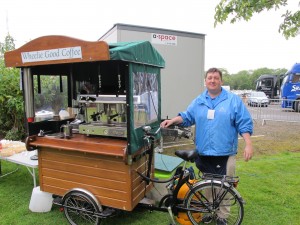 The best two shots I had all day.

Well, it wasn’t pretty out there for me today, although it sure was pretty– the Killarney Golf & Fishing Club provided a meticulously maintained venue for the pro am for the Irish Open this morning.  We teed off at 8:25 on the eleventh hole and faced daunting challenges early, as the course played long and wet and I played like I was underwater.

By the time we’d warmed up fans began to gather, and I was hoping that tournament organizers were including helmets with entry fees.

The highlight of my day came at the 1st hole, when after knocking mm drive just into the second cut into tall, wet grass, my new coach Arthur Spring Sr.  recommended six iron for the difficult 160-yard shot.  A crowed of on-lookers had just finished clapping for the approach of our touring pro John Parry.  My goal on the approach was not to hit anybody hard enough to send them to the hospital.  But my shot cut crisply through the grass and launched the ball over the corner of beach I needed to fly and bounded once short of the green and then high up onto a ridge at the left edge of the putting surface.  At first I didn’t recognize the sound, and when I did, assumed it must be for Rory McIlroy, who was actually teeing off on an adjacent hole.  But no, the clapping was for me.  It was enough inspiration for me to knock the double-breaking 25-foot downhill putt to three feet and solidly put the next one away for par. 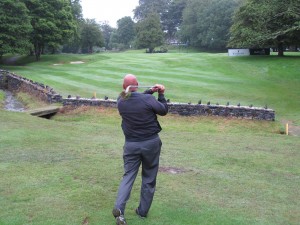 No I didn't reverse the negative. Cybergolf journalist Steve Habel plays from the other side of the ball.

I must also mention one other highlight, since you weren’t there to see it.  Just after passing Padraig Harrington, who pretended not to even recognize me, we came to one of the shortest holes on the golf course.  Coach Spring wisely took driver out of my hand and suggested perhaps a rescue club hit with a little draw.  I responded by scuffing a half-sculled, half-shanked low-runner which came to rest– as if I’d intended this– in the center of the fairway about 160 yards from the green.  I stepped up confidently with a seven-iron and hit the identical shot onto the green, although there was no applause, and in fact people seemed to be trying to look away.  Then I left my twelve foot putt about six feet short and knocked in the next one for one of the worst pars ever witnessed by someone who purposely came out to watch other people play golf.  But the best part is that I beat our touring pro on the hole. 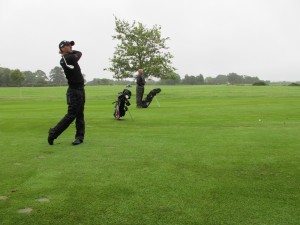 The perfect form of Euro tour pro John Parry. I actually out-drove him here (so what if he started from 70 yards farther back).

Many of the pins today were set at the top or bottom of equally impossible ridges, which made for much entertainment and consternation, a strange combo.

We finished at eight under par, which sounds somewhat impressive since I am not going to explain what the format was for the event.