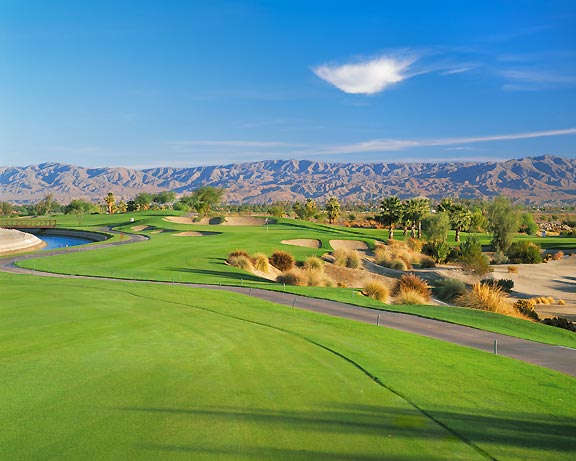 The absolute perfect golf round would combine the camaraderie of a quietly entertaining friend like fellow Golf Road Warrior Jay Stuller with the steadying presence of a woman golf pro like Dede Cusimano (whose gorgeously smooth swing made Jay and me look positively vaudevillian in comparison), and the artistic perspective of one of the world’s great painters of golf courses (the charming Graeme Baxter), who just happens to be Scottish and speaks with a lilt as freshening as a sea breeze rippling over heather.  Such was our morning at La Quinta’s  Silver Rock—an Arnold Palmer design that’s one of the longest on the PGA Tour (at 7,578) but also long on fun when played from the “combo” tees at around 6,300.  In going around, Baxter taught us to “bluter” the ball—a Scottish term defined as “hit it as hard as you bloody well can”.  The painter– who essentially draws for a living– also worked the draw on holes that alternatively demanded a long drive on a par four that would be hard to reach without it, and a long drive on a hole short enough to tempt you to swing for the green off the tee.  Such as the fifth, where I dumbly swung out of my shoes while Cusimano crafted a fairway wood to end up, well, in the fairway– from where, incidentally, par seemed much easier than the bogey I made from my tee shot, two counties to the east.  Throughout the morning Dede served as our guide, spiritual leader, and entertaining host since she was the most local of us all– she teaches just down the road at Rancho La Quinta Country Club, and I would take a lesson from her any day after watching her play with breezy confidence.  And unlike a lot of golf pros, she actually seemed to enjoy herself– but maybe that was because Baxter was so fun to be around.

Part of the pleasure of playing Silver Rock is to scamper out into the desert and right up against the mountains without the intrusion of trophy homes or some guy in his bathrobe drinking coffee on his back deck as the frame to your tee shot.  And speaking of frames, I’d like to put a nice one around Graeme’s gorgeous portrait of Silver Rock’s tenth hole, shown here.  The artist also happens to be a bit of an escape artist, as he demonstrated in getting up and down from some unusual places: though I assumed he was rooting around beneath a large, overhanging tree because he was thinking about painting it, in actuality he was searching for an uncooperative ball. 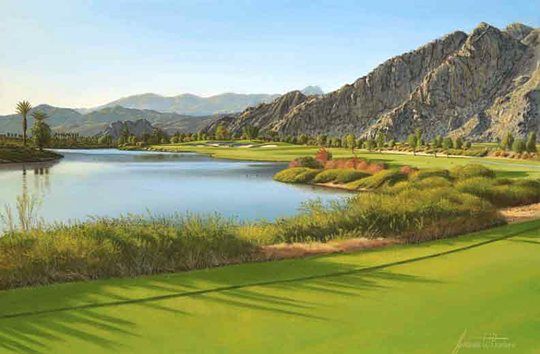 To see more of Graeme’s artwork and to read about his golf exploits from Australia to Wales, visit his website here.