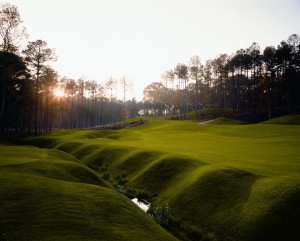 In an era when golf course architects seem to take great pride in their ability to make our game ever more difficult (thanks, Jack!), and to punish us in increasingly cruel and inventive ways for even slightly mis-hit shots, architect Jim Engh has taken the opposite tact.  And golfers should love him for it.  I’d give him a hug right now if he was in front of me.

Engh has figured out what nobody else in golf seems to understand: that scoring well– and even going unreprimanded for less than perfect shots– just makes golf more fun.  Engh’s brilliant Creek Club at Reynolds Plantation leaves no mediocre shot unrewarded and even truly terrible golfers can climb up to the clubhouse from the eighteenth green (or at least from one of them– Engh designed three final greens that are used on alternate days) feeling great about their round.  And I just can’t think of a single thing wrong with that.  There’s also nothing wrong with a really good player shooting a 68 or a 69.

When the Golf Road Warriors show up at this private club that persistent golfers can usually still find a way to get on (although you have to play in the company of a member), the starter tells us a bit about the course awaiting us: that no hazards lurk behind the greens, for example, and that we’ll find this layout just a little different from most courses we’ve ever played.  He says this with a kind of smirk, and in fact everyone we’ve met all week who plays here– including many members– says the course is “different” in the same way they’d describe a distant uncle who’s just not quite right in the head.  I can only say in response that not only don’t they have anything to apologize for, but they should be bragging haughtily about this rare jewel that they have almost entirely to themselves.  In closing, the starter also tells us not the pin position but the green position on number eighteen– it’s the middle one today.

In inventing a clever layout that tends to bump balls back toward fairways and nudge them away from hazards and kicks them in slow circles toward the pins up around the greens, Engh also created golf holes of intense visual beauty.  From the first look at the course and its Zoysia fairways from the first tee Creek Club impresses with a downhill shot across a creek and past two sentry trees that lend definition.  After a solid drive I hit two very mediocre shots (the first lands high and off line but rolls down another forty yards toward the hole, the next barely makes it back across the creek and touches down way short  and left of the green but kicks and rolls up toward the pin) on the 578-yard par five first hole, and yet find myself with a 15-foot birdie putt, and I am liking this already.  Looking up at the pin sheet on the approach I note that you don’t often see pin positions of minus 25 and minus 28 feet. 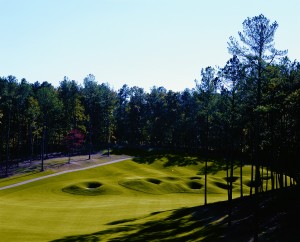 To Jim Engh: We LOVE you, man! Photo by Joann Dost.

After the second hole I’m still rusty but find that not having hit a good shot yet I’m still at even par for the starting pair– it’s just a great idea that’s so counter-intuitive to every overly difficult course I’ve ever played.  I revel in this balancing of golf karma that finally rewards bad shots whereas so many other courses tend to punish even good ones.  In a way Engh’s work here reminds me of David Kidd’s designs at The Castle Course in St. Andrews and Tetherow in Central Oregon, except in an opposite way– whereas Kidd’s earthworks tend to move the ball mostly away from your target unless you choose exactly the right hump or curl and hit in the precise way the design demands, Engh seems to have pre-figured virtually every off-line shot a golfer could hit and created features that usher such shots back into the most playable position possible.

Peter Kessler and I are playing the course in the company of golf professional Mike Davenport, who makes two birdies in the first four holes and must be starting to feel confident, as he actually hits his drive on number five onto the middle of a narrow bridge and we watch it bounce toward an alternate fairway– a brilliant maneuver that most pros wouldn’t even attempt.

By number six I recognize that not only are many of the greens bowl-shaped, but they contain multiple bowls that gather shots and circle them back toward the various cupping areas.  One of these is so steep and fast that Kessler– to our great amusement– is forced to chase after his cigar as it rolls down a hill.  It’s the quickest I’ve ever seen him move.

One shot demand that Engh does require is a high loft to many of the greens, which sit uphill behind various crazy humps and bumps.  But these are crafted so beautifully that each hole is an individual artwork of design elements– or several artworks, actually, as tee shots are framed beautifully by trees and creeks, and green complexes are photographic compositions of hummocks and bunkers (that mostly don’t even come into play) and rolling, curvy lines.

Number twelve is one of my favorites all day– a risk-reward shot where the risk is much less than the reward.  Golfers can choose between two fairways, but the more difficult one only requires a 210-yard carry to reach.  Streams, lakes, and pot bunkers converge in the center of the hole and the two fairways S-curve gracefully through and over and around them.  Possibly the craziest hole on the routing comes at thirteen– it’s a par three over water with a green that wraps 60 yards in the perfect shape of a croissant, where the pin could be hidden completely out of site at the back behind steep mounds.  Everything drains down from raised hills toward the green like in a watershed collecting rain from miles around. 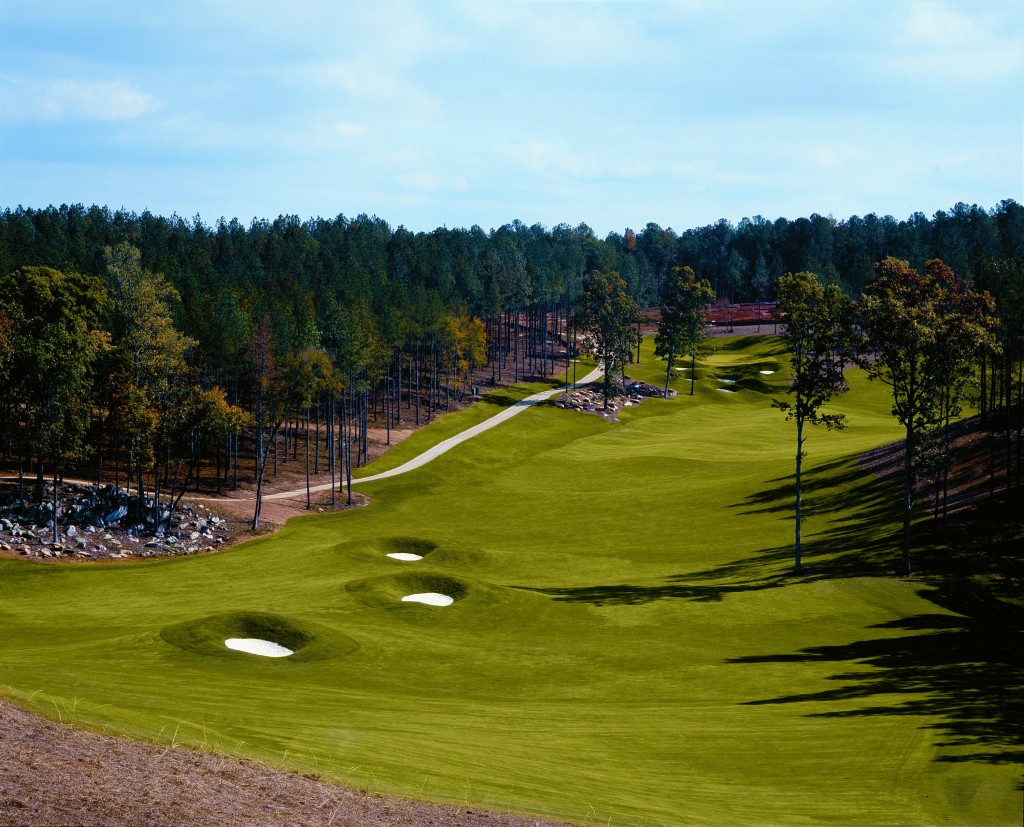 On sixteen– a short par four with the green perched way up above gumdrop mounding– I hit my best shot of the day, though Mike Davenport tells me I’m a bit long.  But when we get up to the green and I’m looking for my ball he points silently toward the hole.  We’ve been told that the Creek Club awards a surprising number of birdies, eagles, and holes-in-ones, and as promised, my own personal eagle has landed here.

An un-exemplary display of golf nets me an 81 for the day and a long-awaited victory over Kessler, who is nowhere near as lucky as I am.  He’s forced to hand over twenty dollars at the lunch table– it’s the first time we’ve played for money because I told him I needed greater motivation than simply a running tally of lifelong wins and losses to be at my most competitive.  It works as I knew it would, except Kessler borrows back ten bucks at the airport later in the day to tip the skycaps.