Today the Golf Road Warriors took on Rees Jones’s Black Lake Golf Club, about an hour from our current digs at Treetops Resort.  We drove there in high style in a Cadillac Escalade, provided by GM, that was only a bit larger than at least one of the par threes on the the golf course, and even smoother.  And how appropriate to drive there in one of the most luxurious American-made cars in history, given that Black Lake is owned by the United Auto Workers, and part of a sort of resort camp opened in 1970 as a retreat and learning center where UAW members and their families could get together away from the normal strains of daily life.

We managed to find a few strains of our own on the workmanlike golf course that is consistently solid in every way if also just a tad uninspired.  Number one at Black Lake presents a clean opening foray of 430 yards with bunkers at the landing area and the green.  A good opening hole is one that provides a full look at the entire routing, and this one delivers.  Number two introduces the theme of wetlands, which work to determine much of the strategy at Black Lake– it’s a 200-yard carry to the fairway from the back tees of this right-doglegging beauty.  A long fade works well here– not coincidentally the specialty of burly Warrior Tom Bedell.  In fact, we’ve seen him hit a long fade from the fringe around the green. 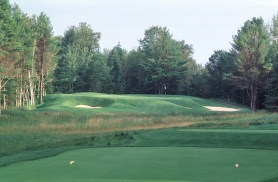 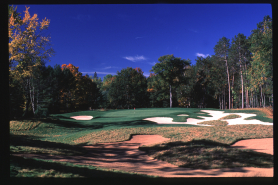 Par three of another color-- number 5.

Solid par threes appear at number three and number five, with completley different looks and shot demands– the first requests a mid-iron over wetlands to a raised green, while the fifth presents a maze of bunkers en route to a 206-yard challenge suggesting a well-struck hybrid and lots of air time.  While course features generally accentuate the natural beauty of the site, Jones’s bunkering is in places overwrought, twisting into the kinds of shapes you might see on a microscope slide.

The operative word pairing on the 515-yard par-five sixth is: risk/reward– coming on the second shot, when you need to decide whether you are both close enough and man enough to curve a fairway wood with a perfect long draw to a green running beside a blue lake. The front side closes and the back side opens with back-to-back par fives– the former a gigantically long monster of nearly 600 yards, but the subsequent challenge a mere 518 with a portfolio of bunkers and a lake gathering together in harmony near the green.

Other great holes include the “Sahara” hole, number 14, which architect Jones “discovered” in a natural sand pit on the site.  Nine tees provide more than enough options for you to find one that works– unlike Warrior Brian McCallen, who managed to find some sand to blast out of anyway (see below).  You may also notice that golf yardage books like to use a lot of “parentheses.”

By late in the day you’ll have figured that the many perched greens are more reachable with half a club more than you think you need.  Blacklake concludes with an uphill par five mined with bunkers and a green with many hidden assets that must be negotiated en route to the final cup.