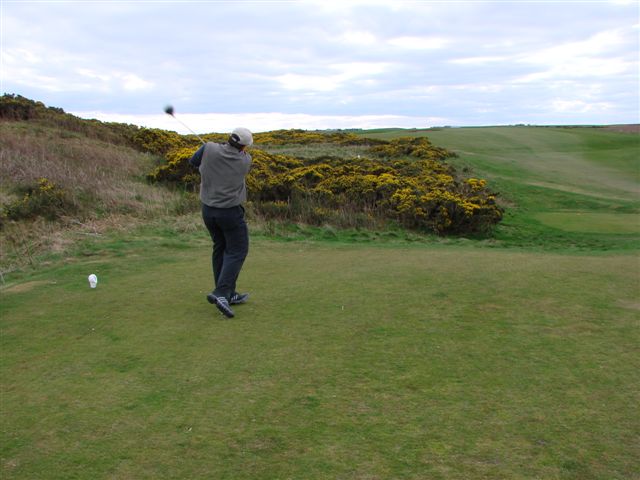 Do not try this at home. Author at Cruden Bay, Scotland.

I am the TaylorMade Golf Poster Child.

Not Dustin Johnson.  Not Martin Kaymer.  Not Justin Rose or Sean O’Hair or Sergio Garcia or any of the other super-talented touring pros TaylorMade uses in its ads– guys who could hit 300 yards off the tee swinging a 2 x 4 at a grapefruit.  Me– I’m the poster boy.  With my 11.1 handicap index and a swing so ugly you wouldn’t buy it a drink if it was alone at a bar in a blackout.

Nobody was more surprised than me to learn that I am TaylorMade’s ideal spokesmodel.  Most club manufacturers would run for the TOUR trailer upon seeing my golf swing, but the fact is that I am a testament to what TaylorMade Golf has accomplished.

When I first went for a session at TM’s MATT fitting system (Motion Analysis Technology by TaylorMade) five years ago, I was told that of all the golf swings they’d ever seen, certain aspects of mine were as extreme as they even believed possible—such as my angle of decent and the way I delofted the club.  At the time, clubfitter Michael Neff, working out of the Columbia Edgewater Country Club in my hometown of Portland, Oregon, fit me with a set of R7s specifically crafted to help me get more loft and move the ball from right to left—the opposite of what was happening in my golf swing, which encouraged not only low flight but a sometimes wicked slice.  The R7s worked their magic for me, and in the ensuing few months after receiving the clubs my handicap dropped from about a 15 to a low of 11.2. 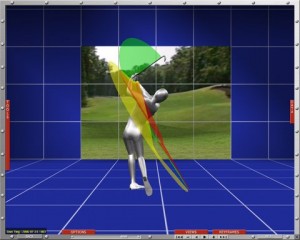 I’ve played with the R7s, quite happily and with great confidence for about five years in which I’ve remained between an 11 and a 13 handicap, with a steady, dependable, and predictable game—and the same ugly swing I’ve always had.

This year, upon hearing so much about TaylorMade’s new R11s, I thought it worth getting refit at the MATT lab to see whether anything had changed in my swing, and whether the new clubs could offer me any advantages that the old ones didn’t provide.

The answers were: yes, and yes. 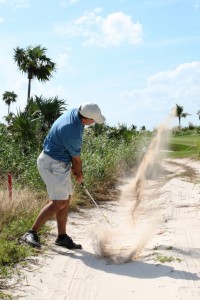 In case one photo wasn't enough (my second shot on a very short par four at The Abaco Club, in the Bahamas).

Almost as surprising as the extreme nature of my descent was the fact that between the ages of 45 and 50 my swing speed  actually increased by five miles per hour, a good sign.  According to John Warren, the fitting wizard who has taken over for but still works with Michael Neff, although I’d improved a bit in certain areas, my swing was, essentially still my swing.  Which was John’s very polite and professional way of saying: “Yikes!  Not pretty!”

But the good news is that new TaylorMade golf clubs have incorporated several rather reveolutionary features that no other golf clubs on the market provide—and they are especially important to someone with a swing like mine.  So while the company is pushing their new Burner 2.0 line because 99.9% of golfers have different swing problems then me (in fact, most have the opposite swing problems) and those clubs have the potential to change their games, the company’s new offerings are so versatile, and so customizable that their Burner SuperLaunch irons combined with the new R11 driver and fairway woods happen to have the answers to the question: how can anyone possibly make me a better player unless I start over and rebuild my swing from scratch?

As John Warren explained, the SuperLaunch irons were engineered with a higher-launching head and more bounce to aid a “digger” like me who often takes a divot about equal to my body weight.  The new R11 driver and fairway woods provide a way for clubfitters to adjust the club to give me more of a draw bias without closing the club head so much that it might encourage pull hooks.  TaylorMade Golf accomplished this by creating a club that has three independently adjustable parts: face angle, loft, and club head weight.

I took my new TaylorMade’s on a trip with me to Puerto Rico recently, where I played a collection of terrific courses including Robert Trent Jones II’s Bahia Beach, two courses at the Rio Mar Resort, the fantastically hilly and sublime El Conquistador designed by Arthur Hills and Associates, and one of the best new golf courses I’ve seen in many years—Royal Isabela— which I’ll be writing about in more detail shortly.

While the jury is certainly still out on the new clubs, I missed two hole-in-ones by less than three feet, shot one of the lowest scores of my career (81) on one of the most difficult courses (Royal Isabela’s slope rating from 6,675 yards is 145!), and my handicap has dropped .5 just from that trip.  And the funny thing is, I never felt like I was quite hitting the clubs perfectly, despite the excellent results.

If it ever stops raining here in Oregon I’ll take the whole new TaylorMade family out for a healthy spring workout program.  My lifetime golf goal has been to possess even a single handicap card that indicates a single-digit handicap, and I am currently as close as I’ve ever been.  I need to shave 1.2 strokes off my index and you can bet that I’ll be back here to report how we (myself  and my new TaylorMades) are faring.

And if they can make a guy with my golf swing into a single-digit handicapper, imagine what they might be able to do for you.  They might even buy you a drink if you’re alone in a bar.

To read my original story about getting fit for my first set of TaylorMade clubs click here.