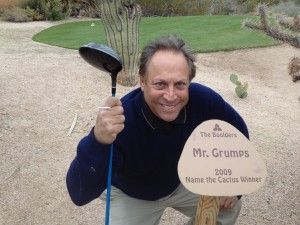 Peter Kessler is the only golfer I know who can talk in the middle of his own backswing, though much of what he says to himself cannot be repeated here for fear of scaring small children.  It’s often an admonition aimed at himself, his putting stroke, a stranger who coughed three miles away during Kessler’s set-up, or something unintelligible even to those of us who know and love him.

Today during an afternoon round at The Boulders South Course, playing a nine-hole skins game which he failed to win with a four-footer worth $32, we discovered they’d already named a golf hole after “the voice of golf.”