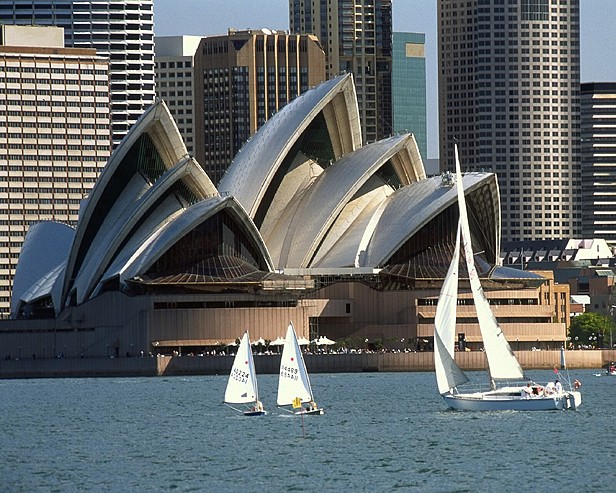 I must admit that on a recent trip to Sydney, Australia I didn’t actually visit the famous Opera House designed by Jorn Utzon and opened by Queen Elizabeth in 1973–  possibly the most recognizable icon of one of the most beautiful cities on the planet. Although the Opera House offers symphony concerts, ballet, theater, and of course opera, Sydney is a city best enjoyed out of doors, pursuing more adventurous activities. And since so many activities in Sydney are measured in terms of their proximity to the marching sails of the roof line of the Opera House, I saw the architectural marvel from so many perspectives I felt a personal affinity anyway.

Speaking of adventures, I’m afraid to tell you that the very best view of the Opera House comes from atop the Sydney Harbor Bridge, completed in 1932 after eight years of construction and known affectionately by locals as “the coat hanger.” And by “atop,” I don’t mean from a car on the asphalt surface of the road or while strolling down the pedestrian walkway.  I mean, literally, on top of the elegantly curved span, where the only thing blocking your view— downward— toward the startling edifice might be a puffy cloud or low-flying plane.  But more on that in a moment.

I visited Sydney with three other travel writers all named Tom, which made for some amusing introductions.  As part of the work we needed to accomplish—in this case “work” meaning playing rounds of golf at some of the world’s top courses, eating in fine restaurants, and enjoying other similarly tough pursuits— me and the Toms took part in a number of soft adventures and fell in love with this enchanting city.  Sure, Sydney boasts some brilliant museums— the Powerhouse, which explores human creativity in arenas ranging from science to decorative arts; the Maritime Museum, offering exhibits on underwater warfare; the Sydney Museum with it’s historical bent; and the Museum of Contemporary Art which is self-explanatory.  But we came to Sydney for a more active visit, and were not disappointed. 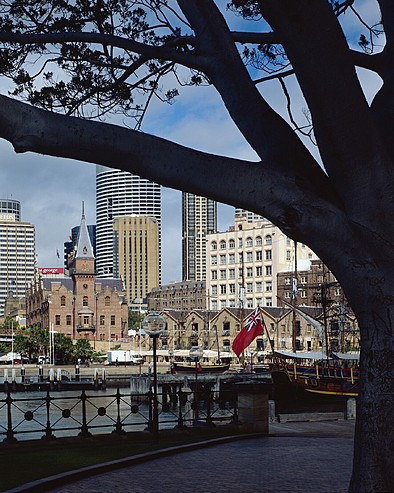 Sydney was founded in 1788 by a fleet of English sailing vessels whose mission was not to build a nation, but to rid another one of its worst elements.  The British government sent eleven ships full of convicts to establish a penal colony on the distant island continent.  By the early 19th century a governor named Lachlan Macquarie wished to establish a full-fledged city on this idyllic location beside the wide, protected harbor.  His superiors back in England felt Macquarie spent too much effort pursuing this dream and recalled him to London.  Although he left Sydney, his name remains on everything from a university to a fort to a hotel.

Much of Sydney’s early heritage can be seen in The Rocks— the city’s oldest preserved colonial district, now full of shops, pubs, restaurants, and galleries, many ensconced in historic sandstone buildings along a maze of narrow streets.  The Garrison Museum provides a glimpse of what life was like in The Rocks in the early years.  Today, the pulsing neighborhood wedged between the Harbour Bridge and the expansive Royal Botanical Gardens, overlooks a series of coves and attracts everyone from polyester-wearing cruise ship tourists to hip locals dressed for a music video.  Where businesses along the cobbled streets once catered to sailors who brought cargo to this remote outpost, today the Rocks attracts fleets of shoppers, diners, and bar-hoppers.

Before my own crew even had a chance to explore The Rocks, the Toms and I traveled just beyond the city to the New South Wales Golf Club, which has been ranked among the top courses in the world practically since revered architect Alistair McKenzie designed it in 1928.  The windswept layout was carved from natural coastal flora and offers broad, muscular views of Botany Bay and the Pacific.  The old links-style course, which has hosted the Australian Open, boasts narrow fairways and deep pot bunkers.  The famous sixth hole plays over pounding ocean surf and presents a fine example of the rugged beauty of much of this golf-crazed nation’s topography.  Walking the course is like a wilderness hike beside the ocean.  After our brisk and invigorating golf— and as so often happens in the challenging professional life of travel writers—we were forced to warm ourselves that evening in the elegant tri-story atrium bar at the Four Seasons Hotel back in The Rocks.

In the morning, our adventures ratcheted up slowly as we progressed from golf to snorkeling, in the company of Jane Strang, who runs a custom tour company called “A Sydney Day.”  Jane, a charming hostess with a lilt in her voice, picked us up in her roomy SUV and toured us through outlying neighborhoods such as Paddington (known for its elegant terrace houses, art galleries, and boutiques), and Darlington (home of a flamboyant Mardi Gras parade and casual late-night dining).  En route to the Rose Bay Wharf she motored us past Nicole Kidman’s house.  The Toms didn’t pay much attention to the architecture and history lesson as they scanned the clean streets for one particular blond actress who was not to be found.

Shortly, thereafter we boarded a dive boat run by the affable and talkative Captain Jack.  We darted across the harbor—between the weather stations on Clarke and Shark islands, past Taylors and Chowder Bay—to a protected cove nearly out in the South Pacific.  Rather than visit the 5000 captive residents at the renowned Sydney Aquarium, we snorkeled in the warm, clear water above a rocky reef filled with colorful local denizens interacting in their natural habitat.

On our return, Captain Jack sped past tiny Fort Denison Island, where in 1842 one of the last Martello Towers (a defensive fortification) in the world was built.  In a typical display of Aussie joie d vivre, a happy bride and groom were laughing their way through a photo shoot beside the fortress.  Of course, we detoured to dash beneath the Harbor Bridge, affording a view from underneath.  And glided practically up to the doors of the Opera House. 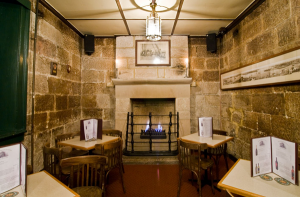 My Hero: The Hero Of Waterloo Pub

Back in the Rocks that night we ate a casual outdoor café meal of fish and chips and then threw back a few Coopers Ales at The Hero of Waterloo and the Lord Nelson, two of the oldest pubs in the city (built in 1845 and 1842 respectively).  I insisted on one more round as we stood at the square bar so we would be in the best possible shape for our surfing lesson in the morning, at world-renowned Bondi Beach.  Our crawl back from the pub led us past shops that we swore we’d be back to visit to buy gifts for our wives—opals for mine, aboriginal artwork for one of the Toms, a giant pan of pastries for another Tom (we suspected such a gift would be unlikely to make it home). 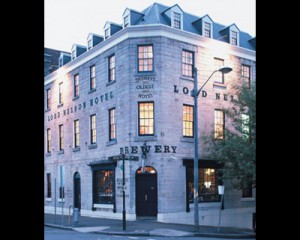 My Other Hero: The Lord Nelson

If you’ve ever spent two hours in a washing machine full of sandpaper, then you know precisely what our surfing lesson, from Let’s Go Surfing, was like.  The Toms’ and my gray hair stood out in the crowd of young studs and gangly underwear models who’d stepped right out of a magazine ad to participate in this adventure on a the perfect scythe of beach between rocky headlands.  We wrestled with our long-boards while being pummeled by the smallest of warm blue waves; farther out, the real waves swatted at more advanced surfers like King Kong knocking down airplanes.  Two hours later, exhausted, our ears filled with sand and tiny crustaceans, we stopped for double espressos and Lamingtons (squares of chocolate cake covered in coconut) in a coffee bar along Campbell Parade, happy to be intact.

After dinner at Nicks (see sidebar) we slept well in preparation for the next morning’s apex—literally—of our adventurous Sydney visit: the bridge climb.  This three hour tour began with a breathalyzer test, the handing out of special climbing suits that would prevent anything from falling out of our pockets onto the roadway far below, and an orientation during which we learned how to clip into safety cables and operate our radio head sets.  And then we were off—climbing ladders, creeping along catwalks and pylons, and finally beginning our ascent of the span, more than 400 feet above the water.  Our guide snapped our team photo at the top—me and the Toms grinning wildly through hangovers and acrophobia, the white sails of the opera house far below us in the distance.