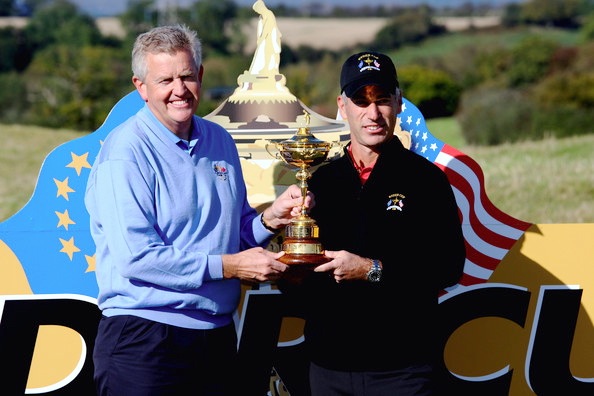 Why did the Europeans win? Because, once again, they played better in fourballs and foursomes than the US team did. Actually, the Americans fared better than usual in team play, winning the first sessions of both formats by one point. But it was the second rounds that killed the U.S., Europe coming out of Sunday with 5 ½ out of a possible 6 points.

Only Stewart Cink and Matt Kuchar were able to secure a half-point from the brothers Molinari. Everyone else lost, including Tiger and Steve Stricker, who lost 6&5 to Luke Donald and Lee Westwood in foursomes after having been victorious in their two previous team matches, beating Ian Poulter and Ross Fisher in fourballs and Miguel Angel Jimenez and Peter Hanson in foursomes.

But when it came to the final-day (Monday, in this odd case) singles, again the U.S. prevailed, winning six matches and halving two, meaning the Euros won four matches. I’m tempted to say something about the Americans showing more of that independent spirit that supposedly marks our country, but I don’t think that’s it. I think the pressure is always a little greater on the home team, Also, in most cases the singles were won by the better player—with the possible exception of Dustin Johnson beating Martin Kaymer 6&4, but Johnson deserved to end this year on a high note after what happened to him at both the U.S. Open and PGA Championship.

Was it Captain Pavin’s fault? I doubt it. It’s trite but true: He doesn’t hit the shots, they do. None of his pairings struck me as odd. At least he didn’t put Woods and Phil Mickelson together, and some of the teams—Bubba Watson and Jeff Overton, anyone?—worked out well.

As to Corey being “Borey”? Should he have been more rah-rah, more in their faces, more inspirational? If the players can’t get excited about playing in the Ryder Cup on their own, they shouldn’t be there. However, I do think it was short-sighted of Pavin not to have had some sort of plan (like Paul Azinger’s “pod” system that has been credited with helping the Americans win two years ago at Valhalla) to instill more team spirit. And by team spirit I mean forging better connections between the members of each two-man team for fourballs and foursomes.

Perhaps someday a psychologist will figure out why the U.S. team members don’t gel the way the Europeans do. Maybe it has something to do with the European Community, the easing of border restrictions between countries in Europe. For example, I’m not sure what language Hanson and Jimenez conversed in, but they obviously communicated better than Mickelson and Rickie Fowler or Mickelson and Johnson. Wait, do I see a pattern here?

Does Hunter Mahan deserve the blame for losing the Cup? No. Not even a little. In this regard, it was a true team effort and the U.S. team played just well enough to keep it close but fall tantalizingly close.

Was it the weather’s fault? Didn’t both teams play in the same weather? Leaky rainsuits shouldn’t have made any difference other than some slight discomfort.

As for scheduling the matches in Wales the first weekend in October? Yes, rain is likely. And wind. And cold. So what? Isn’t weather part of the game? Especially in Britain?

As for the venue, I wouldn’t have chosen Celtic Manor when there are so many wonderful links courses in Wales (Royal Porthcawl is only about 30 miles away and I heard the course was open on Friday during the worst of the rain in Newport). But site selection is about money. Period. And the fact that the weather was a factor proves to me that the Twenty Ten Course wasn’t a bad choice: Golf is supposed to be played in weather, good or bad. And last I looked, these are supposedly the best players in the world.

Furthermore, given how the matches played out, the course didn’t hurt any. I still say you could hold the Ryder Cup on a pitch-n-putt and it would be exciting.

Speaking of scheduling… In two years, the Cup will be played the last few days of September at Medinah outside Chicago. I heard the weather in the Windy City was cold and damp last week, too.

Somehow, the PGA of America and the PGA Tour have to work out the dates of the FedEx Cup and the Ryder Cup. I was sorry to hear on Golf Channel last night that a number of players feel some of the Ryder Cup money should go to the PGA Tour and its players, that the only way the two sides will work out a deal is if a check is written. Damn. I love that players compete in the Ryder Cup basically for free (with large charitable donations given in their names instead), as it lifts the event above most others since it is not about the money. But the PGA Tour represents a few hundred pros, not just the guys who make the Ryder Cup teams, and it’s easy to argue that the greater interests of their membership are served by the FedEx Cup and not some limited-field event with no cash compensation. As Alex Miceli rightfully said on Golf Channel last night, “It’s a business.”

So act like a business, get the execs in a room and work this out.

What about Wales? Forget the weather and don’t judge the country by one golf course. There is much more there than an American-style resort just off the motorway.

Wales is a wonderful golf destination (in case you missed it, I spent two weeks in August playing nearly a dozen Welsh courses and blogging about them; check out my posts if you’re interested in what real Wales golf is like). I hope this long-overlooked country begins to get some of the attention it deserves.

If you never got to Ireland or Scotland before they were discovered by the rest of the golf world, go to Wales.

So what’s the good news from the Ryder Cup? Tiger played pretty well by the end—he went 3-1 and his swing looked better than it had in a long time.

While I still think he needs a haircut (I’m beginning to confuse him with Justin Bieber), Rickie Fowler is a stud, one hell of a match player, and was a savvy Captain’s pick by Pavin as Fowler is likely to be on many Ryder Cup teams in years to come and might as well get some experience now.

As said earlier, maybe Dustin Johnson has exorcised some of his demons. And it will be interesting to see if Zach Johnson and Jeff Overton can build on this experience heading into next year.

On the European side, a new Ryder Cup nucleus is forming around the likes of Ian Poulter, Graeme McDowell, Rory McIlroy, Martin Kaymer, and the Molinari brothers.

And I’d pay good money to sit down and listen to Jimenez tell stories—as long as he brings the wine and cigars.

Future shocks? Players to watch if they can regain their old form: Phil Mickelson (just how sick is he?), Padraig Harrington (just how slow is he?), Jim Furyk (I know he won the FedEx Cup, but even he has to be thinking about winding down, no?), Stewart Cink (if he can keep putting the way he did in Wales, he’s got a few good years left).

Bold prediction. Expect the Euros to continue their winning ways in the Ryder Cup, dominating the series for the next decade or more. In fact, don’t be surprised if by 2020 we’re talking about expanding the U.S. team. Who would we want? The rest of North America (Mexico and Canada)? Maybe South America (wouldn’t you love to have seen Angel Cabrera play)? And can some American family adopt Ryo Ishikawa?