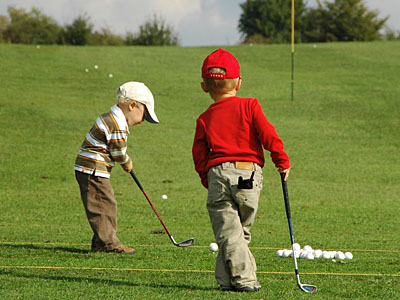 Yesterday came the news, reported here, that a New York State Court of Appeals had refused to penalize a golfer for not yelling “fore” before his poor shot struck, and seriously injured, another golfer. It seems the second golfer was standing well away from the expected line of flight of the ball and as golfers assume a risk simply by being on the course… Well, sorry.

In today’s follow-up column in the New York Times (oddly located in the “New York” section even though the examples range far afield, including internationally), Peter Applebome reminds us of some of golf’s other legal battles, and not only about injuries on the course. There are sex discrimination suits, environmental issues, the Casey Martin case against the PGA Tour, and more. As Applebome puts it, “golf has evolved into the perfect litigation machine.” There are even books, cited in the article, that deal specifically with golf and the law. (No, not on my holiday gift list, thank you.)

In fact, the article ends with a line from The Little Green Book of Golf Law, by law professor John A. Minan, an adage I’ve heard many times before and probably seen on needlepoint samplers available in cutesy-pie shops everywhere: “For right-handers, a ball that strays to the left is a hook, to the right it’s a slice. If it goes straight it’s a miracle.”

Minan’s added fillip, sure to be on the next delivery of pillows, “It’s not a legal principle, but it’s reality.”