Of all the statistics I heard at the PGA Show last week, the most depressing was that 7 out of 10 golfers are overweight.

Define overweight anyway you want—body-mass index, too much belly falling over the top of your pants (what a friend calls “dunlap disease”: Your stomach dun lap over your belt), or your clothes don’t fit. You know when you’re overweight and most of us are. 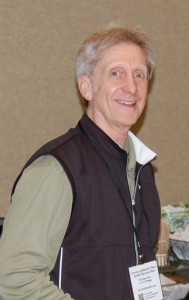 So says golf’s leading food and weight-loss coach Larry Jacobs (left), who offers a program aimed specifically at fellow golfers. About 35 years ago, Jacobs was suffering “incapacitating belly pain” that no doctor or ER could identify. It took two years to find a nutritionally aware physician who suggested it could simply be a particular food not agreeing with him; they soon determined that Jacobs was allergic to eggs. After his disabling pain vanished he was inspired to learn all he could about food, health, and fitness, and help others suffering similar conditions.

The original plan wasn’t specifically designed to help clients lose weight, but as they identified and eliminated problem foods, Jacobs noticed they were getting smaller and feeling better overall. So his program eventually became more about helping people with big bellies rather than bad bellies—with an important difference.

“I don’t like the word ‘diet,’” he says. “Diet means eating less, counting calories, and trying to defeat your hunger: If that worked we’d see a lot more thin people. Whatever ‘weight’ people lose that way, maybe half is fat and the other half is muscle and water, which you don’t want to lose. And eventually they get hungry again, revert to old habits, and put back some, all, or more of the weight they’d lost.”

Jacobs’ program—conducted through teleseminars that can be attended online or over the phone—begins by helping each individual identify his or her problem foods. He is very specific about what to give up temporarily and what can be eaten (as much as one likes) in the first two weeks. His information on “Eating Clean” is delivered in two-week intervals.

“I make a big promise: I can show any golfer how to go from being a fat storer to a fat burner in two weeks or less without dieting, calorie counting, or starving—guaranteed. In the first session, I temporarily take people off a handful of very common foods that statistically cause difficulties, foods like nuts, dairy, and a few others. When you go off those it’s amazing what happens to how you look and feel. And there are 50 or 60 foods that you can eat with no restrictions. It’s about eating clean, eating the right proteins, the right fats and oils, the right carbohydrates and starches, the right beverages. Since food is the foundation, when you finally get that right the results can be amazing.”

For golfers, Jacobs breaks the day into a front nine (morning) and back nine (afternoon/evening), and says that just as in a round of golf, you can make a lot of pars, birdies, even the occasional bogey or other.

“If you get a good breakfast and some physical activity early it’s like being under par. But if you screw up and don’t get your exercise, that’s a bogey. But just being a few over par isn’t going to ruin your game or your handicap, and you have the rest of the day to salvage the round. Even if you make a double-bogey you don’t give up the game; you get back to trying to make pars.”

There is much more to the program, explained in great detail at Jacobs’ website, thingolfer.com. His next series of seminars begins on February 15th, and is being offered at half-price. They always sell out.