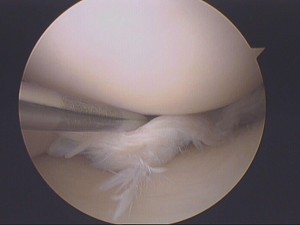 Not a portrait of the author, but pretty close to what my own meniscus tear looked like.

In the Discharge Kit handed me as I checked out of the hospital after my arthroscopic knee operation are four photographs, on which the doctor had written what they show: the torn meniscus; neighboring hard cartilage damage; the meniscus trimmed; and the other side of the joint, which is healthy.

I’ve become fascinated by the four photographs—circular black-and-white images that resemble early pictures of the moon—because they give some evidence, some reality, to the pain I’d been living with the last few years. The meniscus tear resembles a long wispy cloud spoiling an otherwise perfect sky; trimmed it’s pilling on a cotton sweater. The hard cartilage damage—which was unexpected, the doctor told me, not visible on any of my MRIs—looks like wispy hairs, what you might see on a goat. I think the doctor said he trimmed some of them away; we’ll monitor that cartilage over the next few months and if it still bothers me there’s another procedure—something about injecting gel—we might try.

Two days after the surgery (it’s now two days after that), I tried writing about what I’d experienced. I didn’t post it because its self-absorption would have been as painful for others to read as the knee has been for me. However, I like the title, which I heard somewhere: “It’s only minor surgery until it happens to you.”

As far as I can tell, the procedure went fine. Door to door, it took about 8 hours, more than half of that spent waiting to move into the next room. I wasn’t nervous, but did experience a few moments of reflection, particularly when I was finally heading into the OR and the physician’s assistant wheeling my gurney asked if I wanted to ride or walk in. As the doors opened, I walked in and realized—gazing on a scene we’ve all become accustomed to from television—that although I’d been hearing for years that the surgery was “nothing,” it was still surgery.

Home now, I think my recuperation has been very good. I only needed pain killers the first 24 hours, the swelling has gone down significantly, I’ve taken a walk outside, and I’m feeling only minor pain from the required exercises. I start physical therapy on Tuesday, when the pain is likely to increase. But so, I assume, will my function and mobility.

The first morning after the surgery I wasn’t thinking of when I’d play golf or ride a bike again but if I’d ever walk again. It hurt, and in such a way that it was impossible not to think that maybe this wasn’t such a good idea. That passed and I’m already glad for having done this: The current pain isn’t the sort of discomfort I’d been living with, but of healing, of incisions and stitches, of normal motion inhibited by abnormal swelling. I’ll ask the doctor about the gel, maybe getting it in the other knee, as well, which has hurt for nearly as long but never showed any tears: I’m betting that the hard cartilage damage, which is a form of arthritis (a family trait, I’m sorry to say), affects both knees.

My original calendar was to be playing golf on May 3. I now have the opportunity to play about a week earlier, and I’ve mentally penciled it in. That’s how good I’m feeling. Now. It could change.