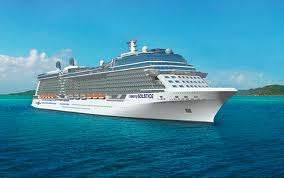 The Celebrity Solstice got the highest rating among entrants in the Mega Ship category of Conde Nast Traveler's cruise poll. But it did not win. Why not? Read on...

Regular readers know I can’t stand the several reader polls Condé Nast Traveler magazine puts out every year – and they just did it again.

It is not that I dislike the magazine or its readers (after all I am one!). It is because as a longtime expert in the travel and travel journalism business, I know how important these polls are, how seriously readers take them, and how like the Golf Magazine and Golf Digest Top 100 Courses lists, they directly influence how people spend their time and money. That is a tremendous responsibility, so the editors and staffers who work on the poll owe it to the public to get it right – but they never do.

I’m not even arguing over the winners or losers, though those are always problematic (meaning ridiculously idiotic) in these polls, elevating middle of the road properties over the world’s best. My problems are more with the frequent glaring errors of reality. To quickly recap, in the golf polls, which I have written about at length, they regularly give the exact same course a different course quality rating based on where you sleep, even though it is not a combined rating, and hotel and course ratings are different. Pebble Beach Golf Links, just the course itself, is considered to be better or worse depending on which of the resort’s multiple hotels you stay at, including the Inn at Spanish Bay or Lodge at Pebble Beach. That is so stupid as to be offensive. And Pebble Beach is not the only such example.

To make matters worse, they give high marks to golf resorts that are not even golf resorts, and do not have real courses, putting places with a par-3 executive layout – or no onsite golf at all – in among the world’s best, while omitting venerable destination-worthy golf resorts with luxury, history and multiple courses, places that are widely acclaimed by experts who actually know about golf travel.  Likewise, in their recent poll of best ski hotels, despite the existence of numerous slopeside ski-in/ski-out true 5-star luxury choices across North America, they chose a hotel that is not even at a ski area as the number one. It boggles the mind.

My feeling is that the folks who edit these pieces simply know absolutely nothing about golf or skiing, and haven’t left their trendy New York neighborhoods long enough to become educated about anything other than latte. Ironically, the magazine’s motto is “Truth in Travel,” but the poll results are complete and utter falsehoods, and at best, lies of omission.

Which bring us to the best cruise ships poll, which I read it yesterday.  I actually was hopeful, thinking this is too narrow a topic to screw up. I mean even Condé Nast Traveler couldn’t do something like put a landlocked hotel on the list and pretend it was a cruise ship, or accidently choose an airline rather than a cruise line. Or could they?

Well, it turns out the editors know as much about math as about golf and skiing, which is to say, not a whole lot. I guess math skills are not so much a Condé Nast Traveler job requirement as having a lot of all black outfits in your closet or knowing the hippest new cocktail lounge in Dubai.

The poll breaks down ships by sizes, and the two biggest categories are below, and this is verbatim from the poll:

Pretty straightforward definitions right? I mean only an idiot could f*ck up which one a ship belongs in.

So guess what won as the Number One Mega Ship, the best ship on earth that carries over 2,500 passengers?

The Disney Magic. And according to CNT, how many passengers does it hold? 2,400. That’s right. Now I have to say, I am actually very good at math, and somewhere along the way between my excellent high school, my prestigious college and my Ivy League grad school, I was taught that 2,400 is “between 500 and 2,500” rather than “more than 2,500.” I guess not everyone had the benefit of such a well rounded education.

But it gets better. What do you think won Number Two Mega Ship, as the second best ship on earth carrying over 2,500 passengers? Disney Wonder, which according to CNT, is exactly the same size as its sister ship, the Disney Magic.

I have nothing against Disney, and I am sure they do a great job with their ships, just as they do with their golf courses. But how would you feel if you were the Celebrity Solstice, which actually won, and got the highest reader rating among ships that belong in the Mega Ship category, yet will never be able to claim its Number One title in ads or to passengers because the editors at CNT are math illiterate. Of course, if it is not math skills to blame, it could be something far worse. Given the score of the wining Disney ship, it would have come in a respectable fifth in the correct Large Ship category, but not first, and I’d hate to think the “mistake” might have been on purpose because maybe Disney buys a lot of ads?

So there you have it. Once again, the outright winner, the very best in the world according to Condé Nast Traveler’s poll, is flat out, indefensibly wrong, another total screw up.

Truth in Travel? I don’t think so.