‘How did Tiger get his Mojo?’

He’s the one who introduced me to the game. He got me started.

He got me ingrained in the fundamentals. He taught me all those things.

In 1991, both on and off the golf course, and over the phone, Earl revealed his ‘Green Beret’ based philosophy of ‘golf as combat’, and the Eastern approach he and Tida used to train Tiger: The Art of the Warrior. Earl said that I asked him questions: “from an entirely different angle than any other writer”. He usually answered me directly. Sometimes he taught me non-verbally by his example. Other questions, like the secret of Tiger’s Inner-Swing and Hyper-Drive, Earl couldn’t answer. He said: “I don’t have the words to describe how I do it. I never studied the theory or philosophy of it from a book. I don’t have the vocabulary. I just do it.” While Tiger was a child prodigy who could perform astonishing feats at will, it was clear that his extraordinary athletic abilities – his Mojo – were the result of Earl and Tida’s unique Eastern approach to training, and the environment they created that allowed him to flourish.

Then, in 1992, upon Earl and Tida’s sage advice, I relocated my golf academy from America to Thailand just as the ‘Golf Boom’ hit. Had I not traveled East, I would never have learned Earl and Tida’s deeper secrets.  In Thailand (and throughout Asia), yoga, meditation, and martial arts are deeply rooted and integrated into the culture and daily life. The awareness of internal energy (Qi, Ki, Prana, Mana) and the extraordinary powers within the human energy body — the 5th dimension of golf — is widespread. These factors have combined to produce an amazing amount of golf champions in Thailand and throughout Asia. Through fusing golf with meditative, yogic, and martial arts skills, Tiger has activated powers almost incomprehensible to Westerners – his Mojo. And he’s not alone! But before you can decipher and acquire the Eastern secrets which underlie Tiger’s Mojo — and awaken your own — I need to provide the background to put them into a context that you, as a Western golfer, can easily understand. So once again we must first return to square one, to the ancient historical and cultural lineage that defines Earl Woods approach. 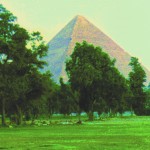 Earl Woods was a warrior’s warrior, and a sage. As a Green Beret was exposed to secret martial arts traditions — especially African & Asian — that he integrated into his philosophy or life, golf, and golf training. The warrior sciences and martial arts of Asia — China, Japan, Korea, and India — have African roots. The ancient Egyptians developed a system of combat and a high level of martial arts with a religious and philosophical basis. They laid the physical and philosophical foundations of yoga and martial arts to unlock the fundamental essence of the martial arts, which lives today in the hearts and minds of warriors everywhere. A connection of thought existed between Egypt and China from at least the 8th century B.C. These are not just similarities, but branches of the same knowledge coming out of Africa that spread in all directions and took root in other cultures from the earliest times. From these early concepts are the hidden roots of today’s martial arts systems, and the origins of yoga, meditation, and medicine. Many of the fundamental concepts found in Indian, Chinese, Japanese, and Native American civilization derive from a great cultural wave that started on the North African coast near the 6th century B.C that spread to China through India.

After their introduction into Dravidian culture of southern India, the African yogic and martial arts evolved into Kalarippayattu, the grandfather of Asian martial arts. This system focuses on the vital points in the human energy anatomy of Ayurvedic medicine to develop an awareness of the flow of prana (Qi) from the solar plexus through the 72,000 energy (nadis) pathways, enabling a warrior to disable, kill, or heal. Buddhist monks traveling and teaching throughout Asia eventually spread the knowledge of this secret martial and energetic art to China. 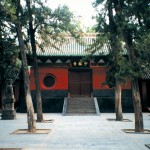 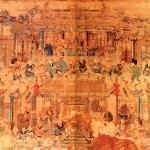 The legendary Shaolin Temple, founded in Henan, China in 497 A.D. developed the fighting styles and training systems that are the basis of virtually every classical Asian martial art today. The Shaolin Temple was an Imperial Temple where Emperors of every dynasty ascended to pray on behalf of the people. Shaolin monks included the best generals, high government ministers, officials, poets, philosophers, and other great minds of China. The Shaolin temple was actually a center for the collection and diffusion the best teachings of Chinese civilization.

The Monastery’s White Garment Hall has two monumental, 12-foot long murals on the walls that features dozens of Chinese and black Shaolin monks engaged in martial combat training together graphically illustrates the history of martial arts’ migration from Africa, through India, to China. 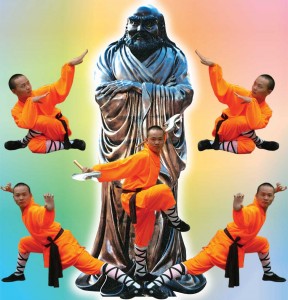 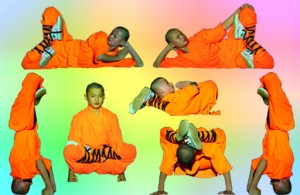 In 526 A.D. a ragged eccentric monk named Bodhidharma, (whom the Chinese called Ta Mo) traveled to the Shaolin Temple from India. Following a visionary impulse he crossed the barren plateaus of Tibet on foot all the way to the sacred mountains in Northeastern China. Before his arrival, Taoist monks only focused on prolonged sitting meditation in full-lotus, or rigorous physical martial training. As a result, these monks were cramped and crippled from prolonged meditation without exercise, and the martial artists were violently aggressive fighters with no spiritual awareness. Martial artists only used exercises based upon movements that animals use when fighting to build muscular strength, to develop speed, and to learn tactics. There was no concept of using the mind to guide energy, nor to synchronize physical movements with the breath. He taught the monks pranayama — yogic breathing — and Hatha Yoga — stretching postures to open the energy body. He fused these techniques with indigenous animal forms of Chinese calisthenics, giving birth to Qi-Gong exercises and the Shaolin martial arts we know today. He was the first to fuse meditation and martial arts training into a unified system of practice based on Qi energy. By developing Qi-Gong for fitness, rejuvenation, transformation, and enlightenment he expanded traditional martial arts training into medical, meditative, and spiritual dimensions.

This closed the gap between the internal and the external and elevated martial arts to the heights of physical, mental, and spiritual training. This innovation totally revolutionized spiritual and martial training in China. Combining internal dimensions of pranayama and meditation, by teaching warriors to meditate and meditators to exercise created for the first time warrior-monks. As these legendary warriors began to fuse martial arts, yoga, and meditation, they harnessed Qi and the human energy body to unleash astonishing abilities. And, the fighting forms that evolved here then spread to Korea, Japan, and Southeast Asia.

Before World War II, Eastern martial arts were secret and almost completely unknown in the West. They were either passed down within the temple from master to disciple, or within the confines of a closely-knit family clan. But during the war in the Pacific, American soldiers brought back news of the extraordinary hand-to-hand fighting abilities of Japanese and Korean soldiers they encountered on the battlefield. As America gradually became bogged down in a long, drawn-out wars in Asia the interest in guerrilla tactics increased and elite Special Forces, like Earl, began to study then integrate formerly secret Shaolin-based Asian martial arts skills, strategies, and philosophies into their combat training.

I didn’t give my son the name ‘Tiger’ lightly. His psyche is full of Tiger lore. This concept has evolved within him. 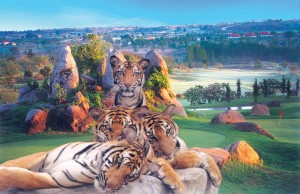 Earl’s respect for ancient martial traditions is clearly seen in him naming his son ‘Tiger’ in honor a famous warrior and after a sacred power animal. In Asia, the tiger is the natural symbol of majesty, dignity, courage, daring and military prowess. Since tigers approach things and attack in a brave, direct way, a ‘Tiger Path’ is a direct approach to a goal. Respected as fearless and fiery fighters, the tiger stands for the powerful and magical in nature. All over Asia it is common belief that tigers can embody the souls of slain heroes, and even Gods. In China, the tiger is king of the mountain and wild animal spirits. Chinese still refer to Shaolin warriors as: ‘Disciples of the way of the Tiger, under the sign of the Dragon’. Ancient warriors in Africa and Asian believed sacred animals manifest certain principles in nature that lie dormant in man, so they cultivated an understanding of the animal’s essence within the warrior. When Earl named his son Tiger, he not only imparted the animal’s sacred fighting spirit, he honored ancient martial arts traditions.

I used my Green Beret training on Tiger. I wanted to make sure he’d never run into anybody who was tougher mentally than he was. 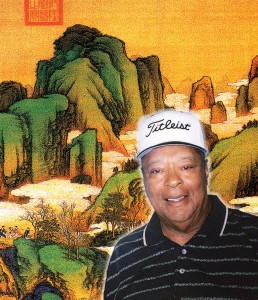 Earl Woods survived two tours in Vietnam. The U.S. Department of Defense says: “A Green Beret is a breed apart, a cut above the rest. Unquestionably the world’s finest unconventional warfare experts, they are fighters of uncommon physical and mental caliber. Mature, highly skilled and superbly trained, they can conduct operations via land, sea, or air, and survive in all terrain, and environments. Unarmed, hand-to-hand close-quarter fighting skills are an essential tool in their arsenal.”

As a Green Beret, where your mind is your most powerful weapon, Earl gained the core values of honor, courage, and commitment. He gained physical discipline – the development of physical skills, fighting techniques and combinations, and battlefield fitness. He refined his mental discipline — the development of a combat mind-set through the study of the art of war — and integrated ethics, integrity and leadership in ways that helped him become a superior warrior.

Tiger had a master warrior as his first model and his first teacher. As a result Tiger acquired Earl’s mental strength, fighting spirit, and respect for martial traditions, culture, philosophy, discipline, strategy, and tactics. When Tiger was 7 Earl began his ‘Green Beret Finishing School’. According to Golf Digest writer Tom Callahan: “From the psychological warfare of early practice sessions to military style de-briefings after junior matches, the boy Tiger, was bought up by Earl, as a tiny Green Beret.”

Golf is a form of martial arts, so you teach and learn

the golf swing the same way you do martial arts. 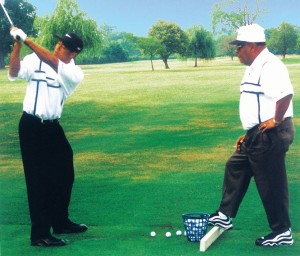 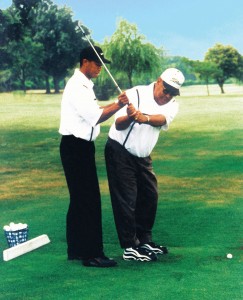 From Karate Earl learned punching and kicking, the use of small weapons, and a method of kata training in a mirror to build Tiger’s swing. Karate teaches position before motion. Whether it’s called kata in Japan, asana in India, hsing shi in China, pomsee in Korea, all mean: ‘to shape, form, mold, or model’, and ‘that which gives form and defines shape’. Kata, the primary method of Eastern classical arts training for 5,000 years, is the foundation of the  Green Beret’s E.D.I.P. (explain, demonstrate, imitate and practice) methodology of ingraining techniques.

In a March 27, 1995, Sports Illustrated article, Rick Reilly wrote of Tiger at age 6: “swinging in front of a mirror.” By practicing his golf swing in a mirror, taking it apart in position-by-position in slow motion, then putting it back together, Tiger grooved his swing into his muscle memory as an unconscious automatic reflex action. Kata training united Tiger’s mind, body, and swing. 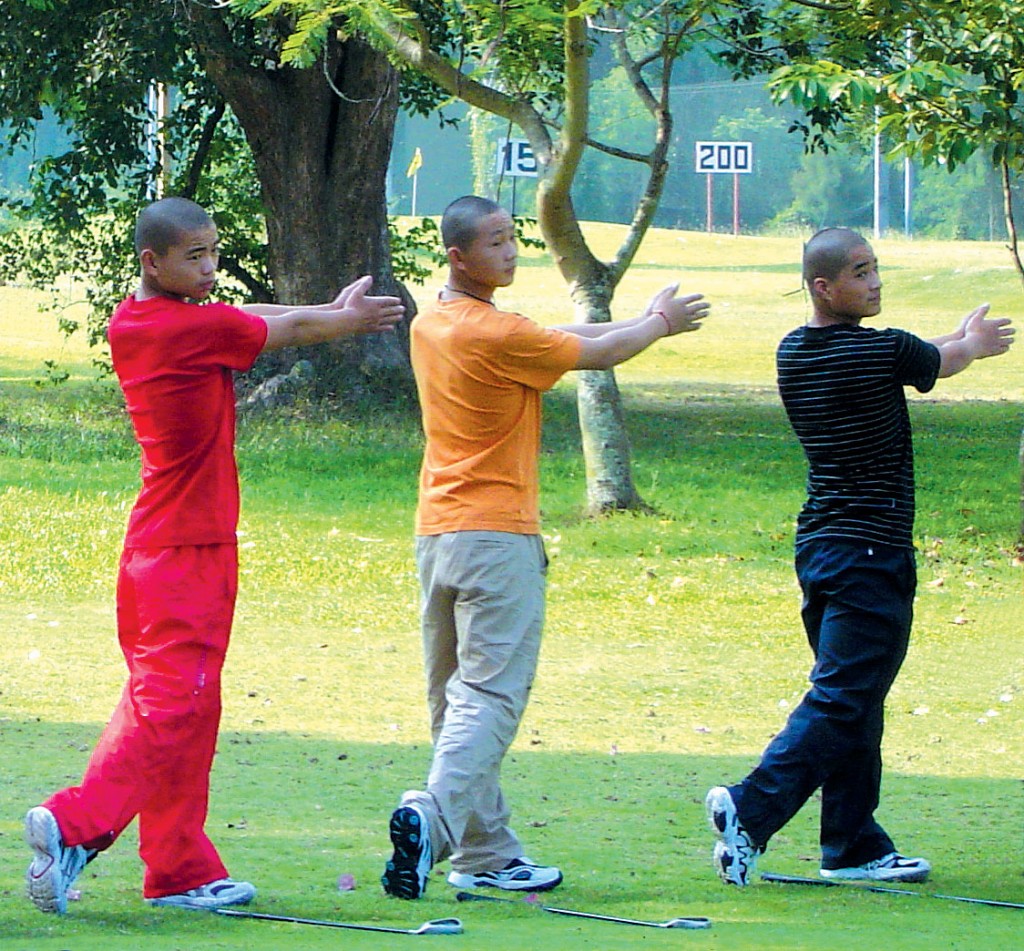 These martial arts training method gave Tiger an internal foundation to sustain exalted states of performance. But this is only partially explains the secret of Tiger’s extraordinary Mojo, and yours. The next step, in Part 4 – Steel wrapped in Cotton – explores Tiger’s explosive striking skills, his battlefield fitness, and the art and science of yoga and meditation.